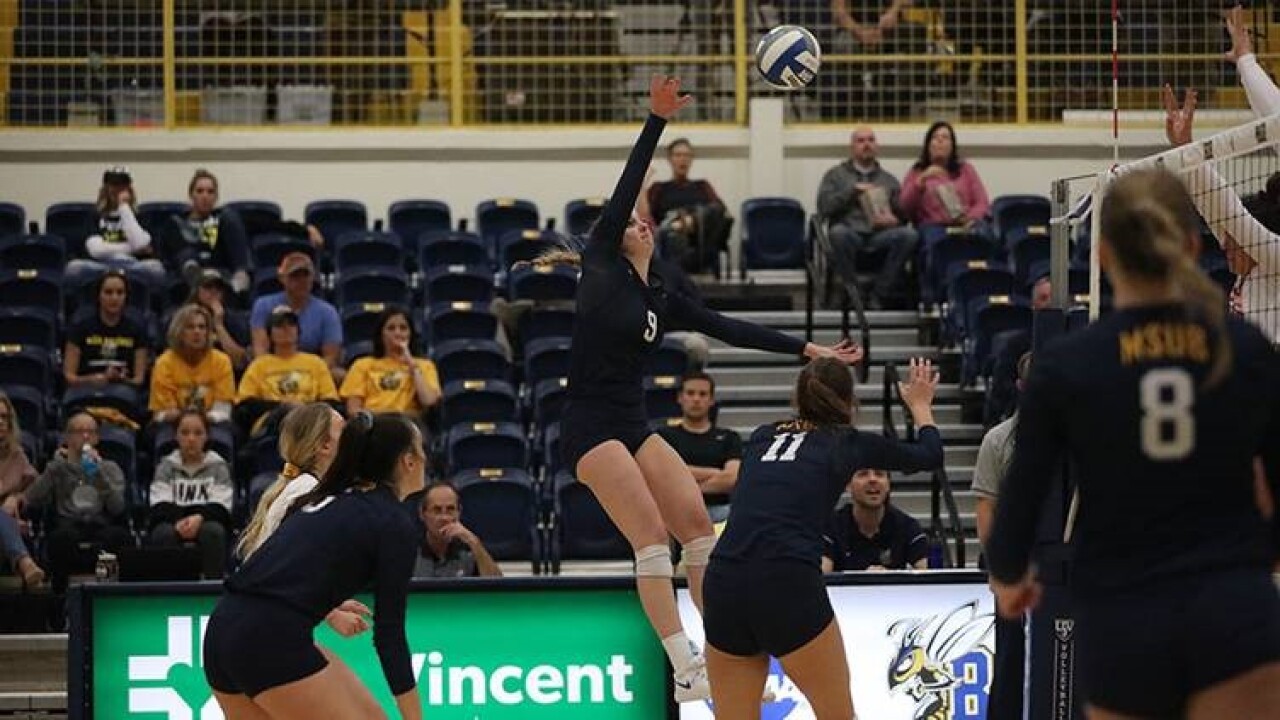 BILLINGS - Montana State University Billings Head Volleyball Coach Casey Williams announced a 27 game schedule for the 2020 Yellowjackets. The slate of games built by Coach Williams is sure to bring excitement, trials and tribulations to the season.


The Yellowjackets lead off the season hosting four teams in the Yellowjacket Classic. The tournament will be the first hosted by MSUB in a few years and will feature Black Hills State University, Bemidji State University, Minnesota State University, Moorhead and South Dakota School of Mines. Playing on September 4 and 5, each team will play each other once in a round robin style tournament. MSUB’s first match of 2020 will be against Black Hills State followed by Bemidji on Sept. 4. On the fifth, MSUB takes on Moorhead and concludes with SDSM.

“I think we have a really strong schedule put together for the 2020 season, commented Coach Williams. “We are hosting a tournament at home for the first time in a few years and I am excited for our athletes to be able to play in front of a home crowd during the first week of season. The level of play at the tournament will be very competitive and we have the opportunity to have a successful start to the season.”

"The West Region Crossover is always a great way for us to see teams in the West Region that we wouldn’t normally see, continued Williams. “We had a tough go at the crossover last year and I think it’s important for us to redeem ourselves a little bit this year. Luckily we play two of the same teams that we matched up with last year.”

“Our GNAC Schedule is always super competitive,” Williams said. “We get the opportunity to start conference with two of the best teams in the region. I think it will be a great test for us and I am looking forward to the challenge!”

Other highlights have to include the two matches against cross town rival Rocky Mountain College. MSUB plays at Rocky on Sept. 29 and welcomes the Bears to Alterowitz Gym on October 27.

“Rocky is always a fun battle,” commented Williams. “Last year we had two very exciting matches against Rocky. It is always a great atmosphere in the gym when we play our crosstown rival, I love to see the community rally behind our local teams and I am looking forward to the matchup again this year.” Last year MSUB earned the season sweep over RMC for the first time since 2007.

In what could prove to be a pivotal stretch of the schedule, MSUB faces a three game road slate midway through conference play. On Oct. 17 MSUB travel to take on Seattle Pacific followed by Western Oregon on Oct. 22 and Saint Martin’s on Oct. 24. The game against SPU marks the official half-way mark in the Yellowjacket’s GNAC schedule. If MSUB can fair well during this stretch, the reaming schedule lines up nicely for the ‘Jackets.

After the three game road swing, MSUB plays six of their final eight games at home. MSUB hosts the Alaska schools on Halloween weekend then hits the road for their final two away games against CWU on November 5 and NNU on November 7.

MSUB plays their final three games at home and if they have played well throughout the season, could be massive for their prospects of the West Region tournament. Seattle Pacific comes to town on Nov. 14 followed by Simon Fraser on Nov. 19 and WWU on Nov. 21. All three games will be dog fights, should prove for an entertaining conclusion and a tough senior night matchup against WWU.

“We are finishing our schedule at home this year for the first time in the four seasons that I have been coaching at MSUB,” said Williams. “I think that this will be a huge advantage for us and will help keep us motivated through season.”

With nine returning players lead by first team all-conference member Bayli Monck as well as seniors Maddi Vigil and Joelle Mahowald, the Yellowjackets are hoping to build on last season's performance. “We have nine returners coming back for the 2020 season I am really excited about the potential this team has,” Williams said. “We have a lot of leadership returning and I think the schedule we have in place sets us up for success.”

With all six starters coming back, experience players off the bench and an infusion of talented recruits, the 2020-21 season is already filled with hope and new light for the future.