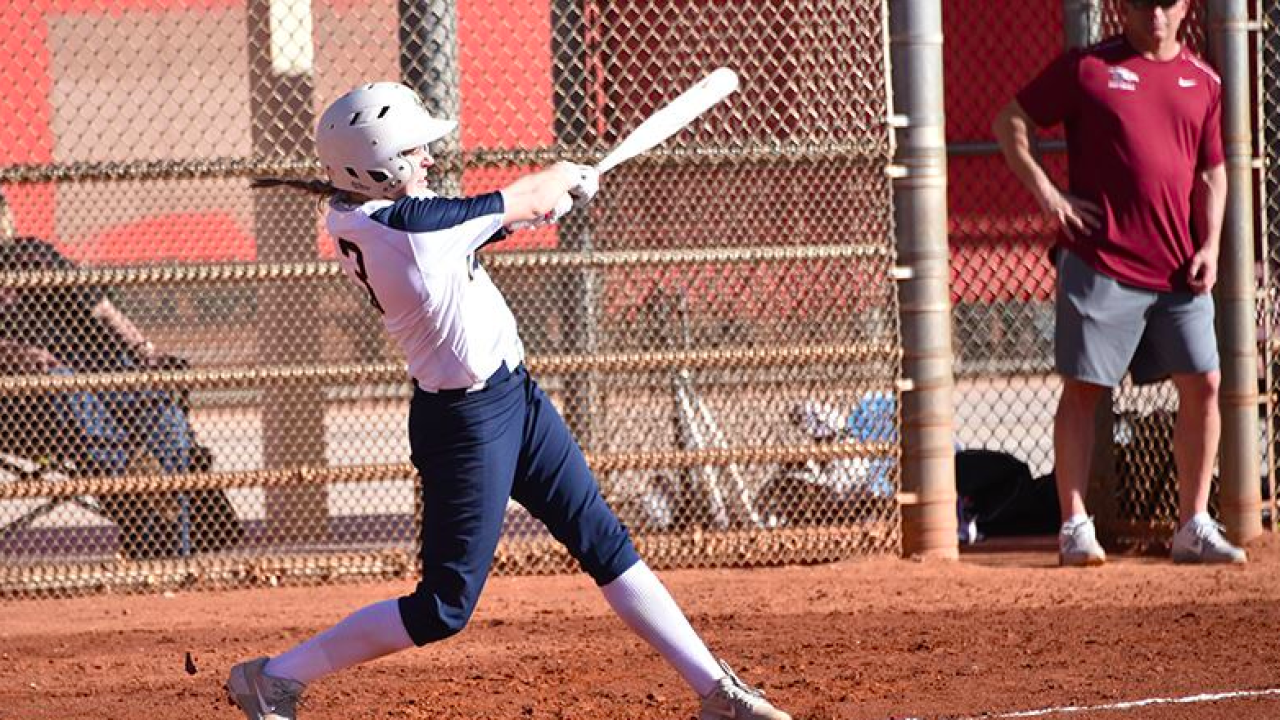 “I am really proud of our team today,” said head coach Lisa McKinney. “We came from behind in game one and it came down to our last out. In game two we played a really balanced game. We played great defense and timely hits. Our pitchers kept us in both games. After game two I feel like we are in a really good spot. Pitchers will come out strong, as long as we play good defense and keep hitting the ball we will be good to go.”

In a defensive game that needed extra inning to settle the score, the ‘Jackets (8-9) and Saints (8-7) traded one run innings with neither team able to do damage when runners were in scoring position. A large part of that being both starting pitchers were locked in. Maddy Lincoln (3-2) pitched her third complete game of the year going all 8.0 innings allowing just six hits, three runs while fanning six Saints. Starting Saint’s pitcher Brooke Brown went 6.0 innings with five hits, two runs and five strikeouts.

Her first at bat, Jenkins drew a walk in the second inning and advanced to second on a fielder choice. Georgiabelle Benning the singled to center bringing in Jenkins and giving MSUB the 1-0 lead. MSUB left three runners on base in the second. Carroll answered in the top of the third with one run to pull even at 1-1.

The Saints then took their first lead in the fifth 2-1 and it would be MSUB’s turn to respond in the sixth. Jenkins doubled to start things off for MSUB and would cross home plate two batter later as again Benning singled to center to earn the RBI and not the game at 2-2. That would remain the score through the seventh and the two games gave fans a little extra inning softball.

In the top of the eighth, Carroll took the lead 3-2 on an Amber Brewer RBI single. Limiting the damage to one run, Lincoln gave MSUB a chance in the bottom of the eighth and Jenkins did not disappoint.

Freshmen Marin Penney single to right field and Kylee Stoll was brought in to pitch run. With the day Jenkins was having, it didn’t really matter who was on base and she took a 1-0 pitch deep to right field for the walk-off homerun and gave MSUB the 4-3 thrilling comeback victory.

PLAYER OF THE GAME: Skyler Jenkins was named the St. Vincent Healthcare Player of the Game. In game one, Jenkins finished 2-2 with a walk, three runs scored and two RBIs including the game winner.

MSUB again was on the board first as Jenkins yet again crossed home plate in the first inning on a Penney double for a 1-0 lead. Jenkins had reached on a single which would turn out to be her only at bat that did not result in a home run in game two.

In the third inning, Carroll tacked on three runs to jet ahead 3-1. In the bottom of the third, Morgan Quimby hit a leadoff double and scored the very next play on a Britzy Hockett single to center field. Jenkins then came to the plate her second at bat and unleashed a missile over the right field fence to give MSUB the 5-3 advantage.

Two batters later, Allie Hughes connected for a homerun of her own, a solo shot over right field to extend the Yellowjacket lead 6-3.

In the fifth, the duo of Jenkins and Hughes again each hit a homerun. Jenkins’ was a solo shot over center and Hughes was a two run shot over the center field fence as well to make it 8-3 in favor of MSUB.

In the bottom of the sixth, Jenkins put the star in her allegro, as she hit her third home run over left field. The two RBI shot tied the school record set by Megan Dettling in 2017, for most homeruns in a single game. The homerun added insurance to the scoreboard giving MSUB the 10-3 advantage.

Carroll would add two runs in the bottom of the sixth, both solo homeruns, but would ultimately fall 10-5. Alyssa Etheridge started game two for MSUB. She lasted 3.0 innings allowing three hits and three runs. Haley Couch came in relief to get the win and improve her record to 1-1. Couch went 4.0 innings allowing two runs on five hits and recorded three strikeouts.

“I just was waiting for my pitch and I was seeing my contact points really well,” said Jenkins. “We want to roll this momentum into tomorrow and just keep hitting the ball hard while playing good defense.”

PLAYER OF THE GAME: Skyler Jenkins was named the St. Vincent Healthcare Player of the Game. Jenkins finished game two going 4-4 with five runs and 4 RBIs. In the two games combined, Jenkins went 6-6 with one walk, one single, one double, four homeruns, six RBIs and eight runs scored.