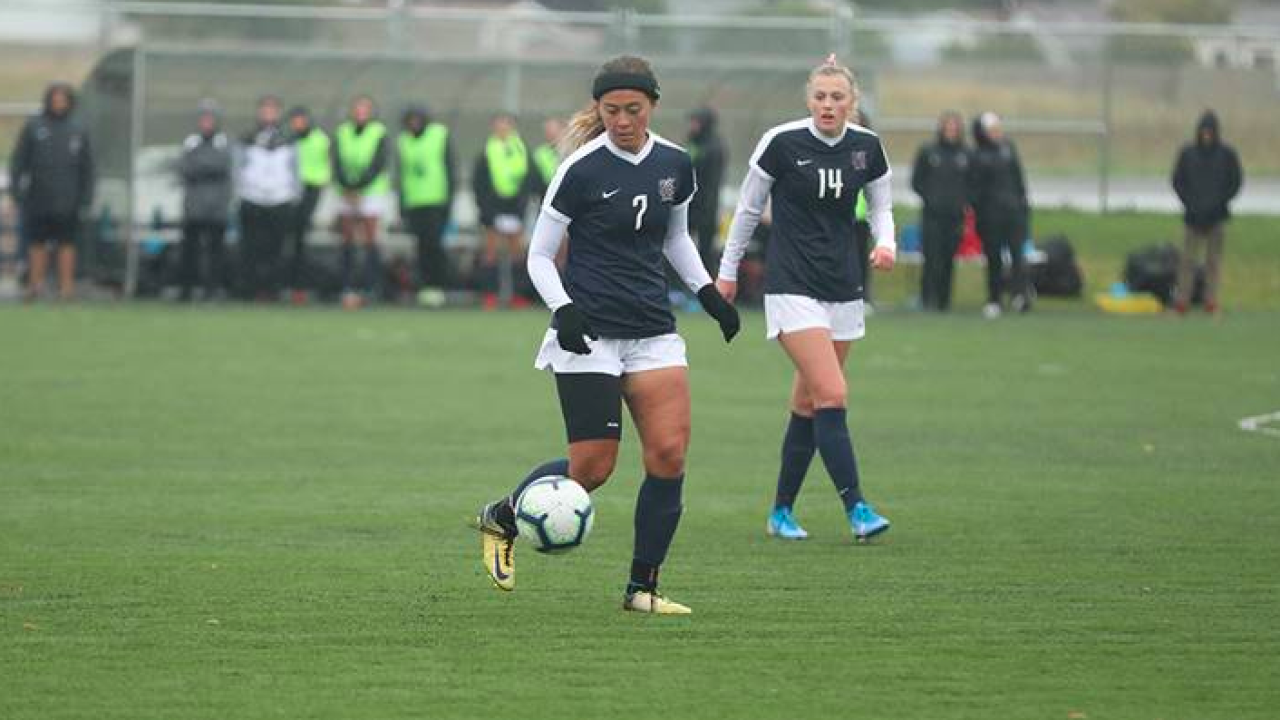 NAMPA, Idaho – Northwest Nazarene University slipped behind the Montana State University Billings back line twice in a span of 18 seconds and scored on both opportunities, leading to a 4-0 final score in a Great Northwest Athletic Conference women’s soccer game Thursday evening at NNU Soccer Field. The Nighthawks made the Yellowjackets pay for defensive miscues and added two goals to their lead in the second half to break-up MSUB’s perfect 2-0 start to the conference calendar.

The Yellowjackets generated several scoring chances but Alexis Montoya made seven saves for her first clean sheet of the regular season. MSU Billings (3-3-2, 2-1-0 GNAC) plays next at No. 17 Western Washington Saturday at 1 p.m., then will have chance to get even against Northwest Nazarene (4-4-1, 1-1-1 GNAC) next Thursday in Billings.

Ashley Parton got behind the MSUB defensive line in the 10th minute, received a pass from Maddy Parton at the top of the box, and beat goalkeeper Erinn Harder low for a 1-0 lead. It was Parton’s first goal of the season. Just 12 seconds later, Rikki Myers streaked down the right side and found a through pass from behind for a one-one-one chance against Harder. She scored her GNAC leading eight goal with the assist assigned to Brooke Felzien.

The Yellowjackets attempted a second half regroup and struck a free kick ten feet outside the top of the box. The resulting play gave MSUB a corner try but they failed to connect the cross. NNU hit the right post in the 60thminute after a quick touch centering pass to the middle of the box. Then Rikki Myers floated the ball to the far post and found Makayla Roggow for a header on a corner kick for NNU’s third marker.

With time winding down, Jenna Turner picked off a pass attempt by Harder and iced the shot on a close range empty net to seal the game 4-0.

Northwest Nazarene had 14 shots with eight shots on goal. MSU Billings mustered 10 shots with seven landing on net. NNU earned four corner kicks while MSUB took three. Myers was the only player with both a goal and assist and also had one shot on goal. Alexa Iacolucci led the ‘Jackets with six shot attempts and four on goal. Julia Keller contributed one shot attempt off the MSUB bench.

Harder made four saves in defeat and allowed more than one goal in a game for the first time since MSUB played Westminster on September 7.

Alexa Iacolucci was named St. Vincent Healthcare player of the game for MSUB.

MSUB heads to Bellingham to play No. 17 Western Washington Saturday at 1 p.m. at Harrington Field. Live statistics and video will be available online through WWU’s stretch internet portal. Northwest Nazarene plays next against Simon Fraser University Saturday at 12 p.m.

Meantime, Theo Lamare scored the game winner to pace MSUB's men past NNU 1-0 Thursday night. MSUB goalkeeper Jessy Martin impressed with eight saves for the shutout and the ‘Jackets made few defensive mistakes in the second half to earn their second regular season clean sheet.

The deciding goal came off the foot of Lamare in the 51st minute. Yaniss Aka slid a pass to Lamare on the right side through traffic. Lamare then juggled the ball to the left of a defender, found a sliver of space, and curled a brilliant low shot right-to-left inside the far post. NNU goalkeeper Alex Nadermann dove to his right but failed to get a gloved hand on the ball. It was Lamare’s second goal this season and also his second game winner.

“Tonight we witnessed a quality soccer game,” commented head coach Thomas Chameraud. “NNU is a quality team that is coached very well. I thought we started the game on the right foot by putting pressure on them and forcing turnovers, but we didn’t finish on chances and let NNU get back into the game. Jessy had an unbelievable save that kept us in it. The second half was more of a battle but we were organized and took advantage of a counter attack to score with a great finish. The guys fought until the end to get that first win in the GNAC. We are of course happy but there is still work to do Saturday at Concordia, a place where we have never won. We’ll rest and start preparing for that game.”

The Nighthawks outshot the Yellowjackets 8-6, but possession time between the two sides see-sawed throughout. The flow of play was frequently interrupted by fouls on both teams, though MSUB escaped the yellow card. GNAC second leading scorer Jake Levine led all players with five shot attempts and Cameron Natvig finished with four. Lamare put four shot attempts up with three landing on goal. Shantik Bedrosian posted two. Luca Battistotti, Noah Runsvold, Bryan Maxwell, and Cole Hage played a full 90 minutes along with Martin, who withstood a second half collision on a save.

THE BUZZ: Theo Lamare was named St. Vincent Player of the Game for MSUB…The ‘Jackets will try to beat the Cavaliers on the road for the first time in school history Saturday. The teams have been playing against one another in the GNAC since 2014.