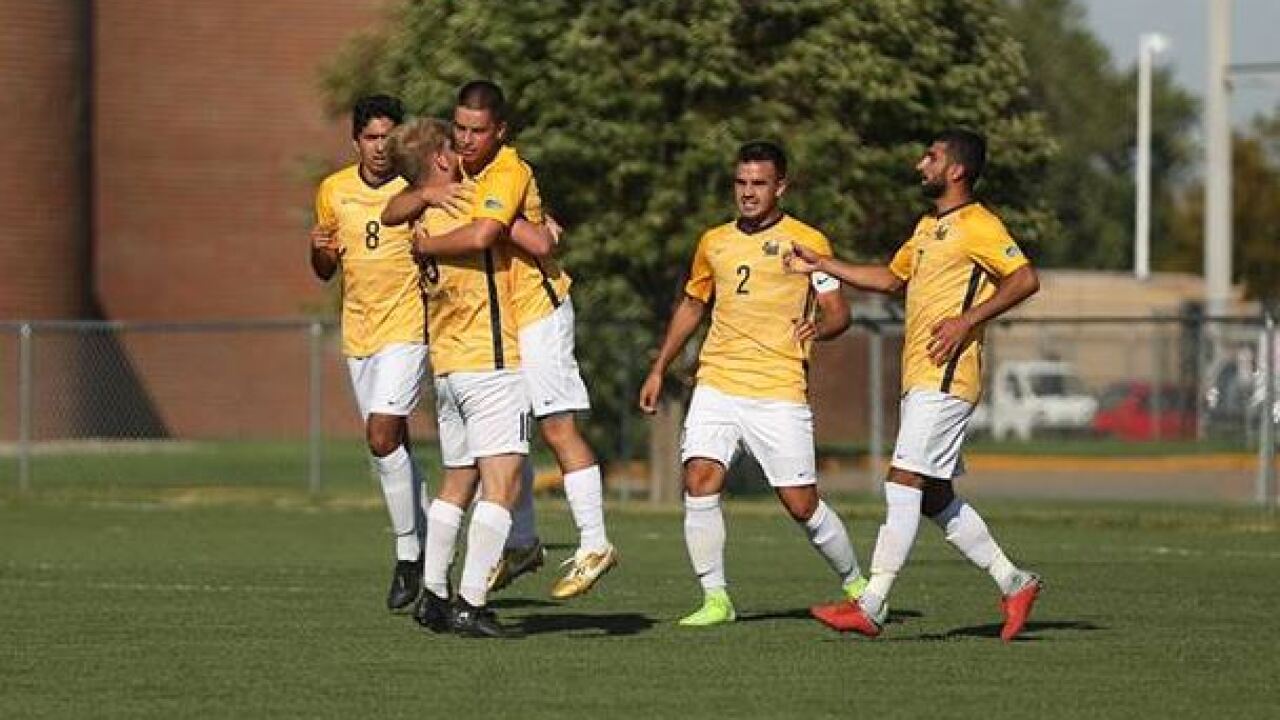 “It feels great to win,” Chameraud said after the game. “We really expected to have a good reaction from our guys after the poor performance on Friday and that’s what we saw. Right from the start, we created chances and we finally scored first. Then we scored the second a short time later which really helped us play with caution the rest of the game. The red card set us back to 10 men unfortunately, but the guys for one half did a good job defensively from a tactics standpoint and we continued to create offensive chances.”

Ignacio Crespo scored the first goal for MSUB after he curled a free kick from the top of the box into the lower left corner of the goal. Andres Perez scored to make it 2-0 just two minutes later after making a long run down the right sideline and taking the shot.

In the second half, Yaniss Aka aimed low after receiving a pass from Perez and buried it. Then Perez tallied his second of the day on a tic-tac-toe passing play from Aka and Crespo to give MSU Billings a 4-0 advantage.

“I’m very happy for Andres, scoring two goals off the bench for us,” Chameraud said. “I’m also happy for Nacho (Crespo) to score on a beautiful free kick as well as a senior. Overall it was a good performance for our team and now we have a week to prepare for a massive game against Eastern New Mexico.”

The Yellowjackets outshot the Hardrockers 12-6 and 7-4 in the second half. South Dakota Mines earned five corner kicks compared to four for MSUB. Goalkeeper Jessy Martin made three saves to earn his first career shutout victory.

Both teams dealt with stifling conditions with the temperature reaching into the mid-nineties by kick-off. Emotions flared in the 43rd minute, just before halftime, causing a yellow card to be issued to SDSMT’s Garrett Bonzell and a red card to MSUB’s Theo Lamare. Despite having to play a man short, MSUB held the Hardrockers scoreless the rest of the way.

One minute of silence was held before the game in memory of Trevor Wildberger and Sebastien Easton took the honorary kick-off. Sophomore Andres Perez was named St. Vincent Healthcare player of the game after notching his second career multi-goal game (October 27, 2018 against Saint Martin’s University). Perez has 14 career points in his time at MSUB.

The Yellowjackets take on Eastern New Mexico (4-0-0) Saturday, September 21 in Bismarck, North Dakota at neutral site University of Mary. The Greyhounds extended their win streak to start the season with a 2-1 win over Westminster (Utah) Sunday 2-1.