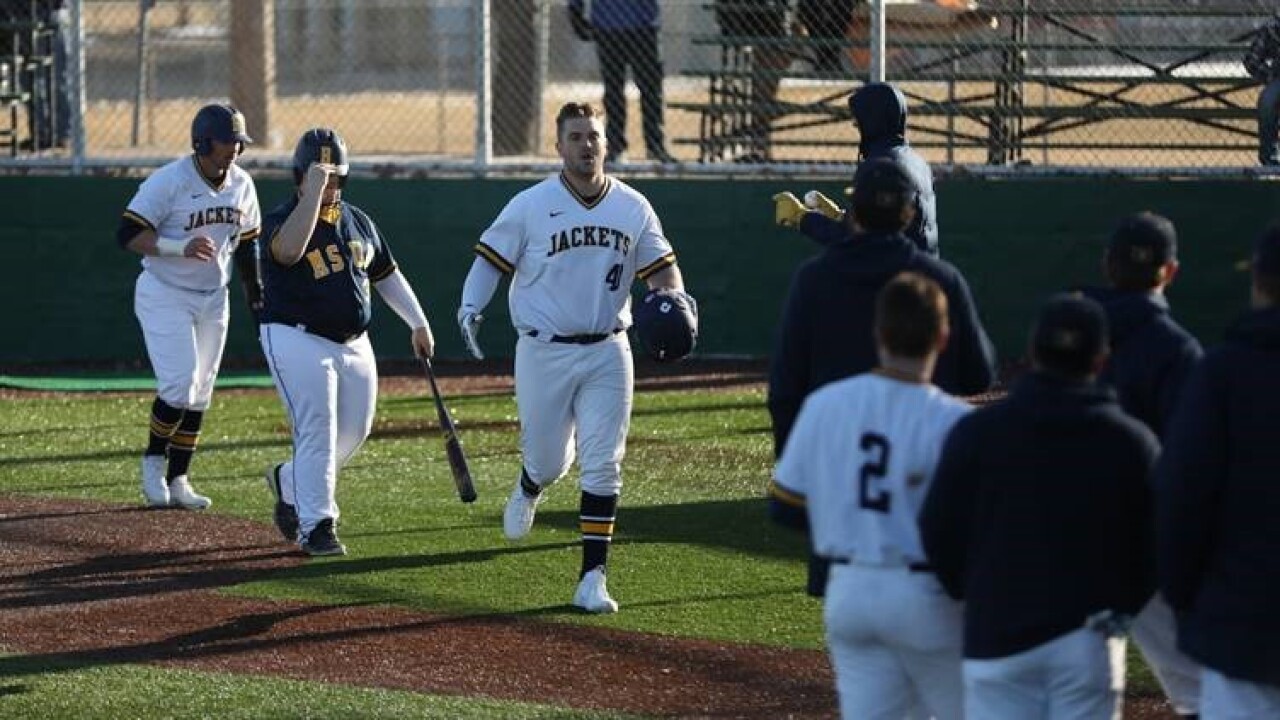 Cipriano smashed a grand slam in the second inning of game one to give MSUB a 4-0 leg up. Then after finishing with 20 hits and five homers in game one as a team, Tanner Cantwell cleared the bases with his first career grand slam to add insurance in the sixth inning of game two. The ‘Jackets hit five long balls in each game, tying the MSUB single-game record for home runs in a game.

“Both of our starting pitchers made quality starts and then offensively, just wow,” commented MSUB head coach Derek Waddoups after the second game. “Mines is a really, really good team, so I credit the incredible job our coaching staff, including Matt (Hape), Riley (Drogesen), and Eric (Morgan) did on things like defensive positioning to help us win. Really, it was a comprehensive effort from top to bottom today and great for our program.”

The Yellowjackets (7-2) spent several days working diligently to clear Pirtz Field of snow and ice in preparation for their home opener. With warming temperatures and sun for two consecutive days, the ballpark was ready just in time for Saturday’s twin bill. MSUB closes out its three game set Sunday at 11 a.m. against Colorado School of Mines (6-5).

After coming up empty with the bases loaded in the first, Cipriano gave MSUB a 4-0 lead with a grand slam, scoring Wyatt Setian, Sam Powers, and Will Riley on the play. MSUB sent 11 hitters to the plate in the bottom of the fourth. Will Powers led off with a homer to left field to start an eight-run inning, then homered again in the same inning to the opposite field. Chris Arpan knocked in Cipriano and Setian with a double to centerfield and Riley followed with a three run home run to score Andrew Schleusner and Cantwell.

MSUB starting pitcher Tevin Hall (1-0) threw six scoreless innings before getting in trouble with a 13-run lead in the seventh. Hall worked 6.0 innings and allowed four runs (all earned) on four hits, walked three, and struck out five. Tyler Blomster (1-1) suffered the loss on the hill for CSM. Blomster lasted 3.2 innings and allowed 11 earned runs on seven hits, walked four, and struck out eight.

The Yellowjackets continued to pile on with single runs in the fifth and seventh, four in the sixth, and three in the eighth. Chris Arpan hit a two-run home run to make it 17-0 MSUB in the bottom the sixth inning.

MSUB posted 12 extra base hits including five doubles, one triple, and five home runs. Luke Bucher and Hunter Roubidoux pitched in relief for the Yellowjackets.

Daniel Cipriano was named St. Vincent Healthcare player of the game after hitting his team-leading fourth home run of the season in game one.

The Yellowjackets held on to win game two after a 10-hit performance and solid relief pitching by Tyler Elliott to limit the Oredigger comeback effort. Cantwell and Arpan paced the team with home runs and Nathan Bloxham went 3-for-4 with one run batted in and two runs scored.

Colorado School of Mines took an early 2-0 lead in the first off starting pitcher Matthew Houlihan, who entered the game with a 0.00 earned run average for MSUB. Alex Bumpus was hit by a pitch to begin the game and Derek Daly followed two hitters later with a home run to left field.

In the bottom of the first, Wyatt Setian answered with a leadoff homer over the left field wall on CSM starter Drew Hill’s first pitch. Bloxham singled and Cipriano homered to left field to put MSUB back on top 3-2.

The Orediggers went ahead again by a run in the third. Bumpus reached on a fielder’s choice and advanced to second on a throwing error. Bumpus went to third on a flyout and eventually scored on a wild pitch. Derek Daly doubled to right field to score Trevor Howard unearned.

The Yellowjackets played small ball in their half of the fourth and pushed across Ryan Roche on a Bloxham single. Cipriano homered to left field to start the fifth and Arpan smashed a pinch-hit home run that nearly cleared a row of trees behind the left field fence at Pirtz Field to give MSUB a 7-5 advantage. Cantwell blasted a pitch over the centerfield fence for his grand slam in the sixth.

“I was really impressed with our pitching staff,” Waddoups said. “Tyler Elliott came in and pitched outstanding for us in game two and we were able to hold on. Having the big pinch-hit home run by Arpan was huge, but just taking good at bats in the middle of that game was very important. I loved our resilience and the grit that our guys showed to stay with the game throughout.”

Walter Pennington (1-2) was tagged with the loss after allowing seven runs (all earned) on six hits, walked three, and struck out four for CSM. Starter Drew Hill threw 3.0 innings and allowed four earned runs on four hits, walked four, and struck out six for the Orediggers.

Tanner Cantwell was named St. Vincent Healthcare player of the game for MSUB.