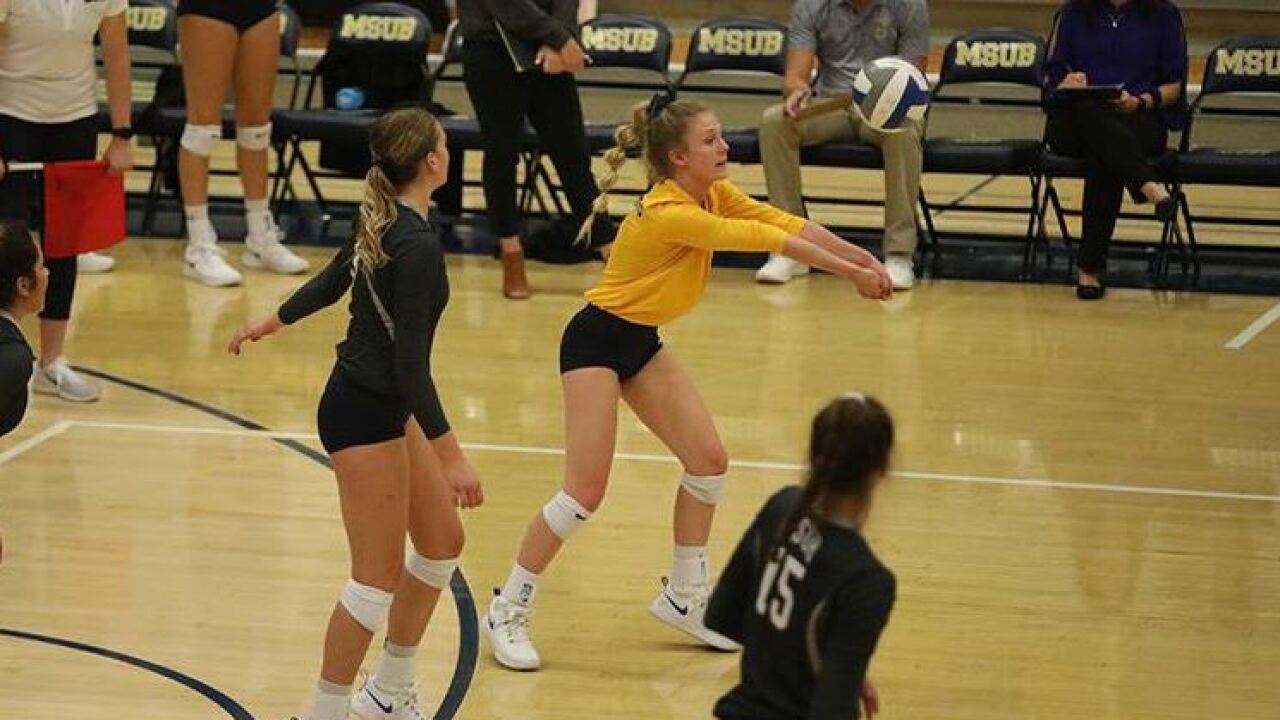 The Yellowjackets (6-13, 4-6 Great Northwest Athletic Conference) started the game off hot with a team hitting percentage of .333 in the first set. The Falcons (7-11, 4-6 GNAC), didn’t do themselves any favors in the back and forth affair by committing 10 first set errors and hitting .178.

The two teams exchanged points throughout the entire set as neither team was ahead by more than two points. With the score tied 24-24, Skylar Reed gave MSUB their first game point with a thundering kill to gain the advantage 25-24. A hitting error by SPU gave MSUB the first set victory.

An abysmal second set proved to be the beginning of the end for the ‘Jackets. Hitting in the negatives as a team, MSUB saw the falcons take the second set 25-14.

MSUB played better in the third set, but SPU led the entire way. The ‘Jackets would get as close as 15-14, but a 9-4 run proved too much to overcome. An ace from SPU’s Paige Dawson handed the Falcons the third set 25-18.

The Falcons played their best in the fourth and final set, hitting .438 as a team while MSUB hit .200. Using runs of 8-3, and 10-7, helped SPU achieve their first match point at 24-15. A kill by Bayli Monck staved off defeat, but the very next point Lindsey Lambert ended the match with a kill to seal the deal 25-26 and overall match victory 3-1.

“We struggled tonight, said head coach Casey Williams. “We could not find out rhythm offensively and had too many errors. We have a big week ahead of us and we have some very winnable matches.”

For the ‘Jackets, Monck was the lone player with double digit kills and finished with her ninth double-double of 11 kills and 14 digs. Hannah Hashbarger had 34 assists and eight digs. Reed and Maddi Vigil each finished with nine kills. Vigil also contributed 12 digs. Freshman Hannah Hayden held a team high hitting percentage of .667.

UP NEXT: The Yellowjackets continue their homestead with three more games at Alterowitz next week. MSUB welcomes cross town rival Rocky Mountain College, Tuesday Oct. 22, followed by matches against the University of Alaska Anchorage on Thursday Oct. 24 and Alaska Fairbanks on Saturday Oct. 24.

THE BUZZ: Hannah Hayden was named St. Vincent Healthcare player of the match for the Yellowjackets. She led the team with a .667 hitting percentage.