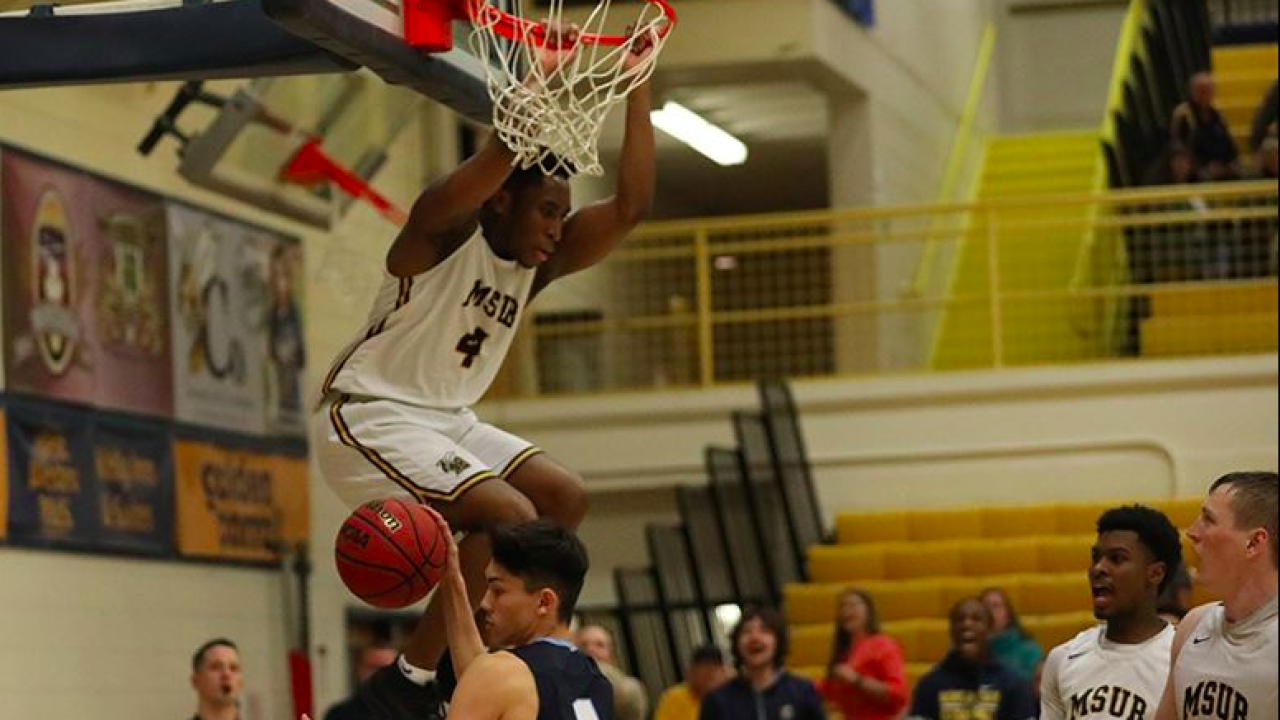 MSUB (11-16, 6-13 GNAC) might have played spoiler for WWU (18-10, 13-7 GNAC) in terms of playoff positioning. WWU was in prime position to end the year as the number two team and earn a first round by in the playoffs, but are now in danger of falling in the standings and having to play the opening game.

The Yellowjackets played with fight and fire all night defeating a bigger WWU on the back of 15 combined three point shots. MSUB trailed just once in the game and only allowed WWU to tie the game a handful of times. Playing inspired and as a team giving up good shots for great shots, MSUB opened up a 30-19 point lead with 7:11 left in the first half after a three point shot from Maduakor. The Yellowjacktes largest lead was 14 points after a Tyler Green layup to make it 38-24 with 4:32 left in the first half. Closing with a 9-3 run, WWU narrowed the gap to 41-33 heading into the half.

WWU would eventually take its first and only lead of the game at 62-59, but MSUB stormed back with two consecutive three point shots from Green and Zharon Richmond to surge ahead 65-62 but would be in for a fight the rest of the way. WWU would be within three points with under two minutes left and would be down by four with just 39 seconds left. Then came the Maduakor dunks.

With 34 seconds left, WWU pressed MSUB in the full court, Chrishon Dixon lobbed a ball for a sprinting Maduakor who took it in stride and punished a two handed slam with a WWWU defender trailing him. A missed three point shot from WWU and in almost a mirror image of what happened 30 seconds prior, Maduakor sprints down the left wing, catches the ball from Dixon and again puts home a thunderous dunk to send the crowd into a tizzy and essentially seal the game with six seconds remaining. Just a few more free throws and that was all she wrote as MSUB went on to the 86-79 points win.

Maduakor finished with a career high 17 points on 6-7 shooting including three, three point shots. The sharp shooting Green capped his night with 25 points, five rebounds and six made threes. Richmond had 21 points, four rebounds and four assists. Brendan Howard was held to single digit scoring for the first time all year as he finished with nine points but lead the team with 11 rebounds.

As a team MSUB shot 53.7 percent from the floor and a scorching 60.0 percent (15-25) from three point range. MSUB finished with a positive turnover margin with 17 assists to 12 turnovers.

“This is a good Western team who beat us earlier this year,” said head coach Mick Durham. “We had a good start tonight which gave us some confidence and we made some big shots. I thought we played with better energy then they did down the stretch and we kept competing. It was a huge win for us with one more to go. Simon is a good team and we will have to play well. It will be an exciting game.”

PLAYER OF THE GAME: Psalm Maduakor is named the St. Vincent Player of the Game for his career high 17 points and highlight dunks.

WHAT’S AHEAD: MSUB plays their final game of the year Saturday against Simon Fraser University at 5:15pm. The game will be senior night in which Green, Jordan Lehrer and Seth Christiaens will all be honored.