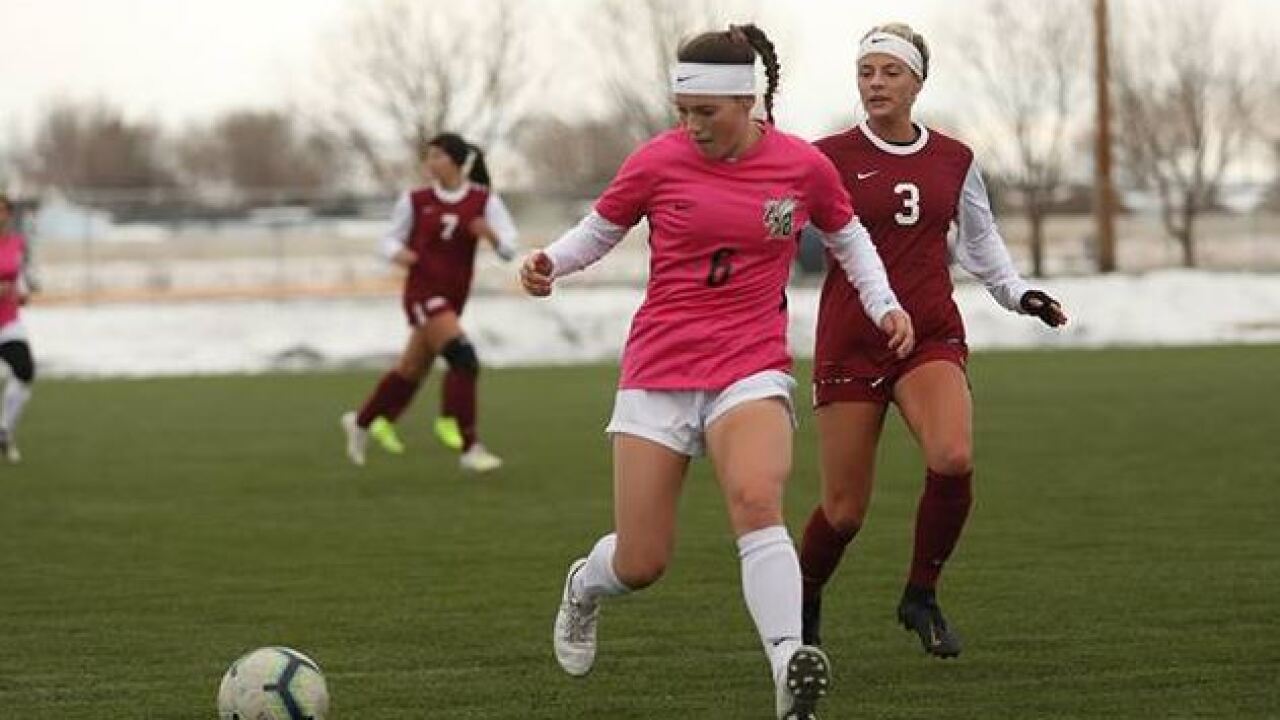 A defensive lapse allowed CWU’s Teanna Lathum to score in the 12th minute, but a two-goal comeback spearheaded by Alexa Iacolucci at the end of the first half and then by Haylee Gunter in the second led the ‘Jackets to home victory for the fourth time this fall.

“It was definitely a hard fought game today against a good Central Washington team, who we’ve struggled with in the past,” said MSUB head coach Stephen Cavallo. “To get a win in our last home game for this group of seniors feels really good. We went down in the game and made an unfortunate error which led to the goal, but we kept fighting and seized the opportunity off the rebound in the second half.”

MSU Billings (5-8-2, 4-6-0 GNAC) kept their hopes of a GNAC tournament berth alive after coming out on top in a must-win contest. The Yellowjackets moved ahead of Northwest Nazarene for fifth place with the top-4 four teams set to qualify for the post-season. Central Washington (6-6-1, 4-4-1 GNAC) currently holds the final spot and remains one point ahead with one game in hand.

The ‘Jackets outshot the Wildcats 13-5 and 8-4 in shots on goal. After regrouping on a failed corner, Emily Gaines looped a pass from near midfield and found Alexa Iacolucci in the center of the box for her first goal in the 45th minute.

“Mikayla (Campbell) came in and gave us some big minutes and Haley German stepped up as well,” Cavallo said. “We played offense by committee a little bit. I felt we could be sharper and better in the final third, especially with through balls and crosses, but it was awesome to see set pieces work out today. Alexa was in the right place at the right time and headed it in.”

Momentum stayed with MSUB through to the 75th minute, when Gunter found a rebound and buried her third goal of the season. The goal came seconds after Central Washington failed to clear a corner and Courteney Shovlin took the initial shot on goal.

“This win means a lot to our team,” Gunter said. “I think this momentum will help push us on our upcoming road trip next week. In the game, we found space on the wings and we knew that we were capable of coming back to win. I think everyone played a role in today’s win and it felt good to do it together.”

The Wildcats recorded four corners in the second half but came up empty. MSUB goalkeeper Erinn Harder earned the win with one goal against and three saves. Emily Thomson made six saves in the loss for Central Washington.

Haylee Gunter was named St. Vincent Healthcare player of the game for MSUB after scoring the game-winning goal.

The Yellowjackets are off the remainder of the week, then hit the road for a pair of games November 7 and November 9 to close out the regular season. Should MSUB qualify, the GNAC Championships are November 14-16 at Interbay Stadium on the campus of Seattle Pacific University.

Earning their fourth clean sheet in the past five outings, MSUB's men held off Concordia University 1-0 Thursday afternoon at Herb Klindt Field. Andres Perez scored his team-leading fifth goal in the 20th minute, as the ‘Jackets evened the season series against the Cavaliers and won their second straight contest.

Concordia (7-6-0, 4-4 GNAC) stayed in fourth place with the loss with 12 points. CU is still one point shy of Simon Fraser University.

“Today was overall a good performance for us,” commented head coach Thomas Chameraud. “Other than the first 10-15 minutes of the game, I thought we were in good control of the game. We learned from our mistakes the first time we played Concordia and we reduced the space between the lines and put more pressure on their defensive line. Then we got long balls with Samuele (Folla), Andrew (Rivera), Luca (Battistotti), Bryan (Maxwell), and Liam (Knox). We achieved our main goal, which was to finish better than last year. Playing Saint Martin’s on Saturday should be another tough game, so we will turn our attention to preparing.”

The Yellowjackets held a 12-7 shot advantage with seven shots on goal against CU goalkeeper Kenneth Symmes. Meanwhile, the MSUB defenders held CU to just a pair of shot attempts in the first half and freshman goalkeeper Jessy Martin was there to make all three saves in the game to collect his GNAC leading fifth shutout. Defenders Luca Battistotti, Liam Knox, Bryan Maxwell, and Andrew Rivera all played a full 90 minutes to help the ‘Jackets secure the clean sheet.

MSU Billings generated scoring chances sporadically throughout and earned nine corner opportunities compared to six for Concordia. Perez and Bedrosian led the team with a pair of shots on goal apiece. Perez played 77 minutes to lead the forward group and Christian Thode contributed 31 minutes off the bench.

The Yellowjackets celebrate senior day Saturday, November 2 against Saint Martin’s at 3 p.m. marking the final game at Yellowjacket Field this season. The team finishes the regular season with three road contests, including a matchup against conference leader Western Washington. The ‘Jackets must take first place in the GNAC to advance to the post-season.

Jessy Martin was named St. Vincent Healthcare player of the game…The Yellowjackets fell 4-1 to the Cavaliers on October 5, their widest margin of loss this season but evened up the series Thursday night…MSUB improved to 2-1-1 on its current homestand. Two of the scheduled home games were moved across town to Herb Klindt Field on the campus of Rocky Mountain College due to weather related causes.