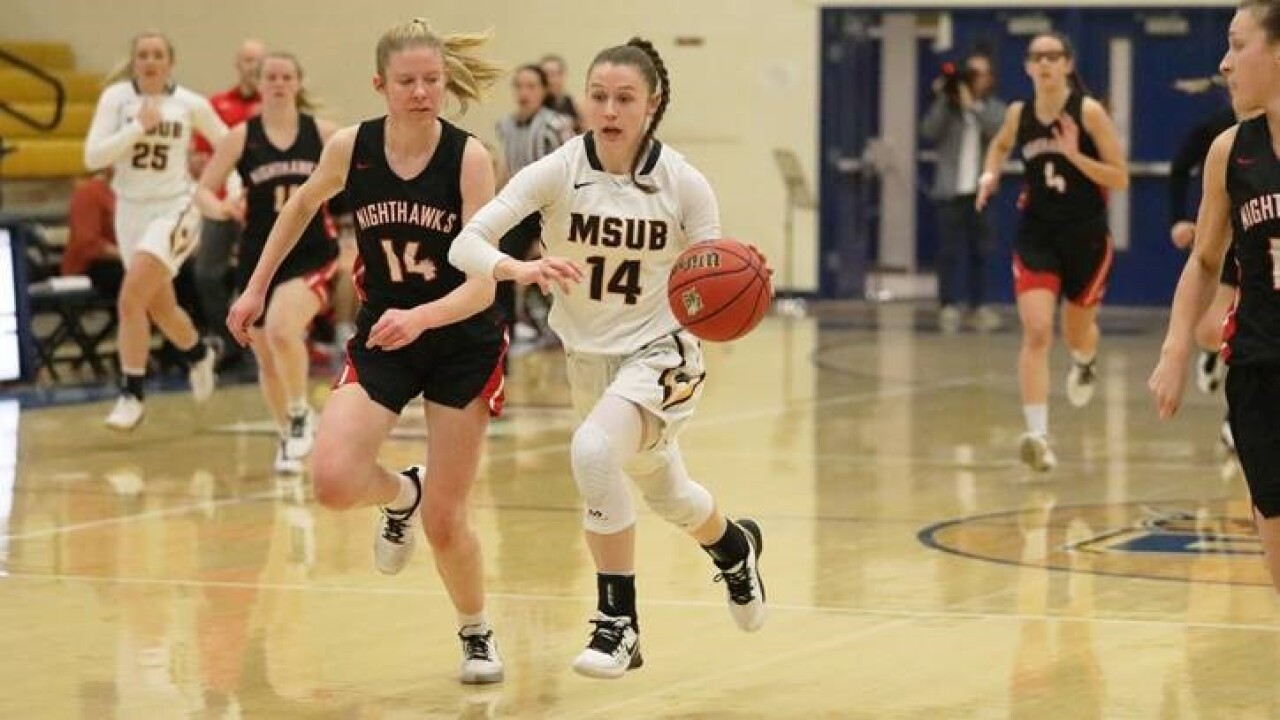 “I was very pleased with our win tonight,” said MSUB head coach Kevin Woodin. “Our defensive effort was consistent in both halves and offensively we came alive in the second half. This was our first 2-0 conference week of the season. I was proud of our players and coaches for accomplishing that goal as it was something we really have been striving for.”

MSU Billings (12-11, 7-7 GNAC) entered the game sixth place in the league standings and stayed two games clear of Saint Martin’s with the victory. With six conference matchups remaining in the regular season, the ‘Jackets would be the last team to qualify for the post-season tournament if the season ended Saturday. Concordia (4-18, 3-11 GNAC) remained in ninth place after its loss and is 3-10 away from Portland.

The Yellowjackets trailed 13-11 after 10 minutes, but found their range by the mid-point of the second quarter to take a 26-21 lead after Collins pulled up on a fast break for three. Shelley finished the first half with eight rebounds and Collins led the team with eight points for a 26-22 advantage.

“The first half was a hard fought, low scoring battle,” Woodin said. “Concordia’s defense bothered us early and we didn’t get the ball into the paint like we had talked about doing. In the second half, we had much better offensive balance and established the interior with our posts. We held them to one shot frequently, which ignited our transition attack and our guards did a great job finding the open player.”

MSUB played a brilliant second half with 48 points and only four turnovers. Lemelin knocked down four 3-pointers while Collins marked three. The Yellowjackets shot 44.1-percent overall, including 55.6-percent in the final 20 minutes. Woodin stretched out the MSUB bench for a balanced effort and 14 players saw time on the floor. The Yellowjackets ended with 30 points in the paint with 13 made shots from beyond the arc and stretched the lead to as many as 30 points with just over two minutes left in the fourth quarter.

“Alisha (Breen) changed our scheme to a zone defense in the third quarter and it really helped us gain momentum,” commented Woodin. “Then once we finally got some separation, I liked how we kept attacking on offense and extended the lead. It was awesome to have six players in double figures tonight. We shared the ball very well in the second half.”

Freshman Shayla Montague posted a strong game with 10 points, four rebounds, and a pair of 3-pointers. Manuel scored 12 points in just 16 minutes of playing time off the bench. Emily St. John and Janessa Williams recorded 15 and 13 minutes respectively in relief for MSUB.

The Yellowjackets pulled in 46 rebounds compared to 30 for Concordia. Dorcas Wu was effective for the Cavaliers with 17 points and four rebounds. Concordia committed 18 turnovers while MSUB finished with 15. The Yellowjackets made it to the free throw line three times in the game while Concordia put away 15 of 17 shots from the stripe.

THE BUZZ: TyLee Manuel was named St. Vincent Healthcare player of the game…The Yellowjackets moved to 9-2 at Alterowitz Gymnasium and picked up their first GNAC weekend sweep Saturday with wins over Concordia University and Western Oregon University.