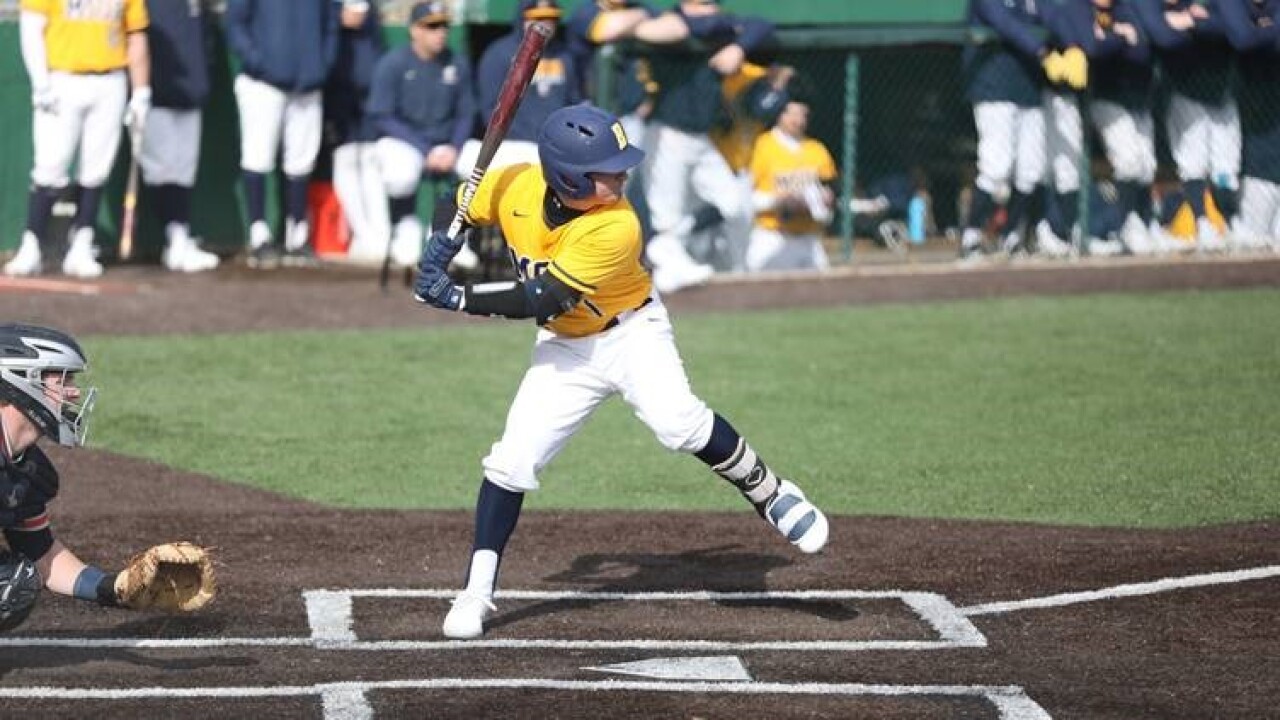 MONMOUTH, Ore. – In a pair of close contests Sunday, the Montana State University Billings baseball team took the second game to even the four game series in Monmouth on Great Northwest Athletic Conference opening weekend at WOU Baseball Field. Chris Arpan homered in a 3-2 loss in game one. Nathan Bloxham and Tyler Detloff hit home runs in game two and the ‘Jackets held off WOU in the seventh for an 8-5 victory.

Tyler Brandenburg stole home in the sixth inning and scored the winning run for Western Oregon in game one at WOU Baseball Field. Dylan Barkley (1-1) pitched well for the Yellowjackets but suffered the loss in 7.0 innings of work. Barkley allowed three runs (all earned) on six hits, walked one, and struck out a career high 10 batters.

The Wolves pitched the first run across in the bottom of the second. Connor McCord and Joshua McIntyre began the frame with back-to-back singles and Ryan Santa Cruz reached on a fielder’s choice force at third base. Sam also made it to first on a fielder’s choice. Jones then stole second and McIntyre came in to score on the throw down.

The Yellowjackets gained a 2-1 lead in the fourth. Daniel Cipriano was hit by a pitch to lead off and Chris Arpan hit his fourth home run of the season to left field. The Yellowjackets stranded two runners in scoring position to end the rally.

Western Oregon scored a run on McCord’s sacrifice fly to center field and on a well-executed double-steal. Seth Kuykendall pitched innings five through seven for the Wolves and earned the win. He did not allow a run, walked one, and struck out four. McCord tossed the final two innings and earned his first save after striking out five of seven hitters.

Tyler Elliott pitched one inning of relief for MSUB and sat down all three men faced in the eighth with one strikeout.

McCord led the Wolves with two hits in two at bats, one run batted in, and the save on the hill. Five different Yellowjackets finished with one-hit games. Cipriano doubled in the first inning and Arpan homered in the fourth. MSUB cleaned up its defense with zero errors after committing four in game two Saturday.

THE BUZZ: Chris Arpan was named St. Vincent Healthcare player of the game.

MSUB scored a run in the top of the first. Will Riley was hit by a pitch and eventually scored on Chris Arpan’s single. Bloxham and Detloff homered back-to-back to lead off the second. Cipriano singled up the middle to score Will Powers and advanced to second on a wild pitch, which scored Riley.

After extending the advantage to 8-5 in the top of the seventh, Muskat issued a walk and was relieved by Roubidoux. Maiben flied out to center field and McCord walked. Mcintyre was hit by a pitch to bring the tying run to the plate but Roubidoux struck out Brandenburg and Justyn Herzog to end the game.

THE BUZZ: Nathan Bloxham was named St. Vincent Healthcare player of the game.