Parker, Knudsen, Parsons to be inducted 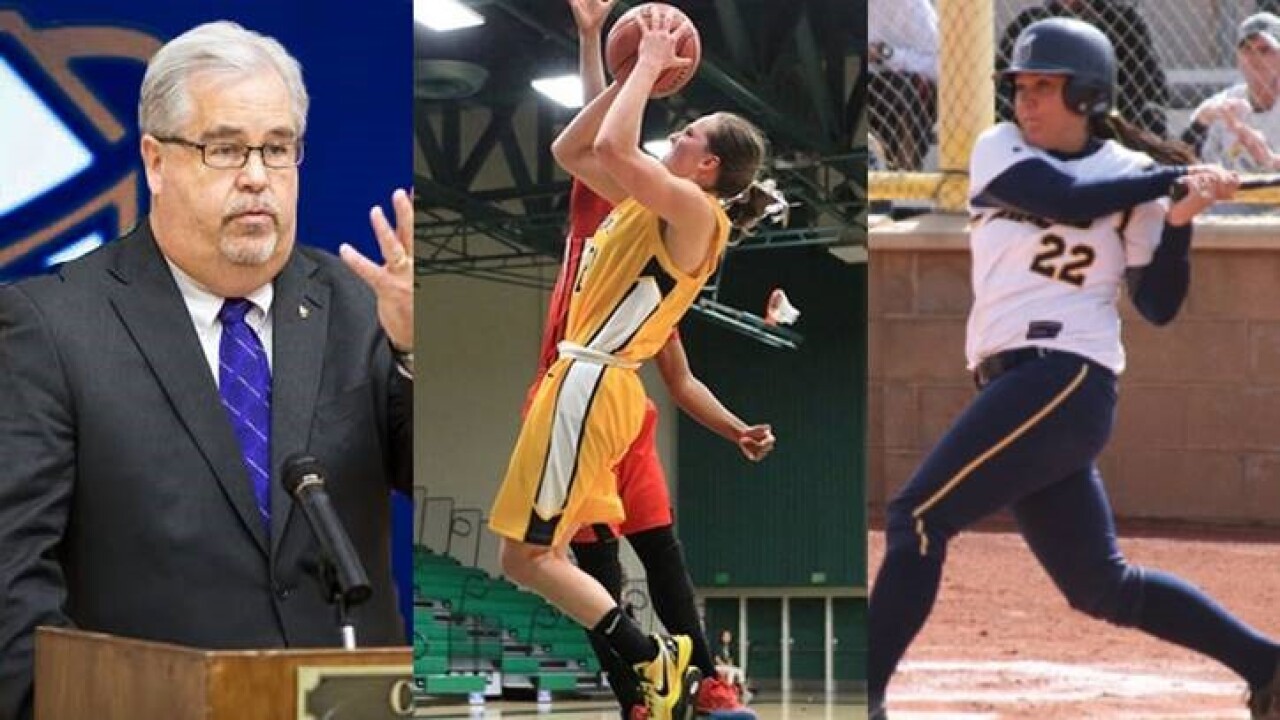 “We are excited to honor year’s hall of fame and distinction class, as it includes a unique and very deserving group,” Montague said. “This year’s inductees include Bruce Parker, Kelly Parsons, and Bobbi Knudsen.”

“Bruce has had an outstanding career as an athletics administrator since graduating from Eastern Montana College,” Montague said. “We are proud to honor him for all he has accomplished and given back to this profession. Bruce had been a mentor and champion for many, and we extend a warm welcome to him for joining this elite group of Yellowjackets.”

Parker served as Director of Athletics at Carroll College for 11 years and was inducted to the Carroll College Athletic Hall of Fame in 2019. In 2014, he moved home to Billings and began his stint as Athletic Director at Rocky Mountain College. During his time at Rocky, he was instrumental in the renovation of Herb Klindt Field in 2016, made tremendous progress in the corporate partnership program, and helped secure the NAIA Division I women’s basketball tournament in Billings from 2017-2020.

Parker was the associate athletic director and sports information director at Montana State University in Bozeman over a 23-year tenure. He is a member of the MSU Hall of Fame with the 1984 football team. Parker graduated from Eastern Montana College (Montana State University Billings) in 1979 with degrees in Business Management and Marketing. At MSUB, Parker was a four-year letter winner and three year captain on the Yellowjacket tennis team under head coach Bob Lee. Active on campus during his tenure as a student senator, Parker was a representative on the athletic commission, the voice of Yellowjacket athletics on KOOK Radio (now KCTR), and was one of six outstanding graduating seniors amongst the class of 1979.

“I am both humbled and honored to receive this recognition from MSU Billings,” Parker said. “My selection into the MSUB Hall of Fame is a tribute to the student-athletes, coaches, administrators and peers that I have had the unique opportunity to work with during my professional career. In addition, the support of my friends and family truly made this honor possible. It is very special to be recognized by one’s alma mater.”

From 2008 to 2011, Kelly Parsons was a force behind the plate in the MSUB softball lineup with 190 total games played. She holds the MSUB record for most runners caught stealing with 44. As a true freshman, Parsons had eight doubles, nine home runs, and drove in 34 runs with a .341 batting average. She earned GNAC all-conference second team and GNAC freshman of the year.

The following season, she recorded nine doubles, two triples, and six home runs, and totaled 18 runs and 28 runs batted in. Parson hit .307 and finished second on the team with 290 putouts, the fourth highest total in MSUB history. She was selected all-GNAC first team. As a junior, Parsons started 48 games and hit .246 with 18 runs, five doubles, eight home runs, and 34 runs batted in. Again, she was selected first team all-GNAC.

In 2011, Parsons ranked second on the team with a .396 batting average including 44 hits and 21 runs scored. She also registered five doubles, one triple, and 12 home runs and slugged .784. Behind the plate, she threw out 14 runners to tie her 2010 mark and recorded the second highest slugging and on base percentage in a single-season, earning first team for the NFCA All-West Region team. A unanimous first team all-conference pick, she earned academic all-GNAC honors for the third time, GNAC player of the wee once, and finished her career as the leader for most games played (190), home runs (35), runs batted in (130), walks (76), runners picked off (10), chances (1043), putouts (915), and tied for most games started (181).

Bobbi Knudsen played basketball for the Yellowjackets from 2010 to 2013. She finished her career ranking No. 12 in all-time scoring (1,262), and No. 6 in assists (339) in Yellowjackets women’s basketball program history. Her 167 assists in 2012-13 rank No. 2 all-time in single season assists in the MSUB record books.

Knudsen played 28 games with 17 starts and a freshman and scored 8.9 points per game with 60 assists and 39 total steals. The following year, started all 30 contests and led the team in points (533), points per game (17.8), field goals made (203), assists (112), and steals (58). In the GNAC, she finished second in scoring, third in minutes played, fourth in assists, sixth in steals and free throw percentage and eighth in three pointers made. Among her sophomore accolades included all-conference first team, all west region first team, NCAA Division II coaches All-America honorable mention, academic all-district first team and academic all-conference.

As a senior, Knudsen started all 27 games and led the team with 930 total minutes. She also scored a team leading 480 points, 186 field goals, 78 free throws, and 167 assists. Her 6.7 assists per game led the GNAC and ranked No. 2 nationally. She was also the second leading scorer in the conference. For 2012-13, Knudsen won first team all-GNAC and CoSIDA academic all-district honors as well as second team all-district, Division II all-American and academic all-GNAC.

“I had the honor of watching both Bobbi and Kelly during their careers here, and the pleasure of getting to know them off the court and field as well,” Montague said. “It is special because not only were they outstanding at their sport, but were great students and leaders of our department as well. They both were fearless to get involved and get to know others on staff and in the administration, a quality that no doubt serves them well in their lives now. They continue to represent MSUB very well.”

Parker, Parsons, and Knudsen bring the total number of inductees into MSUB’s Hall of Fame and Distinction to 165. The ceremony began in 1990 and since then, members of 21 different categories have been inducted.