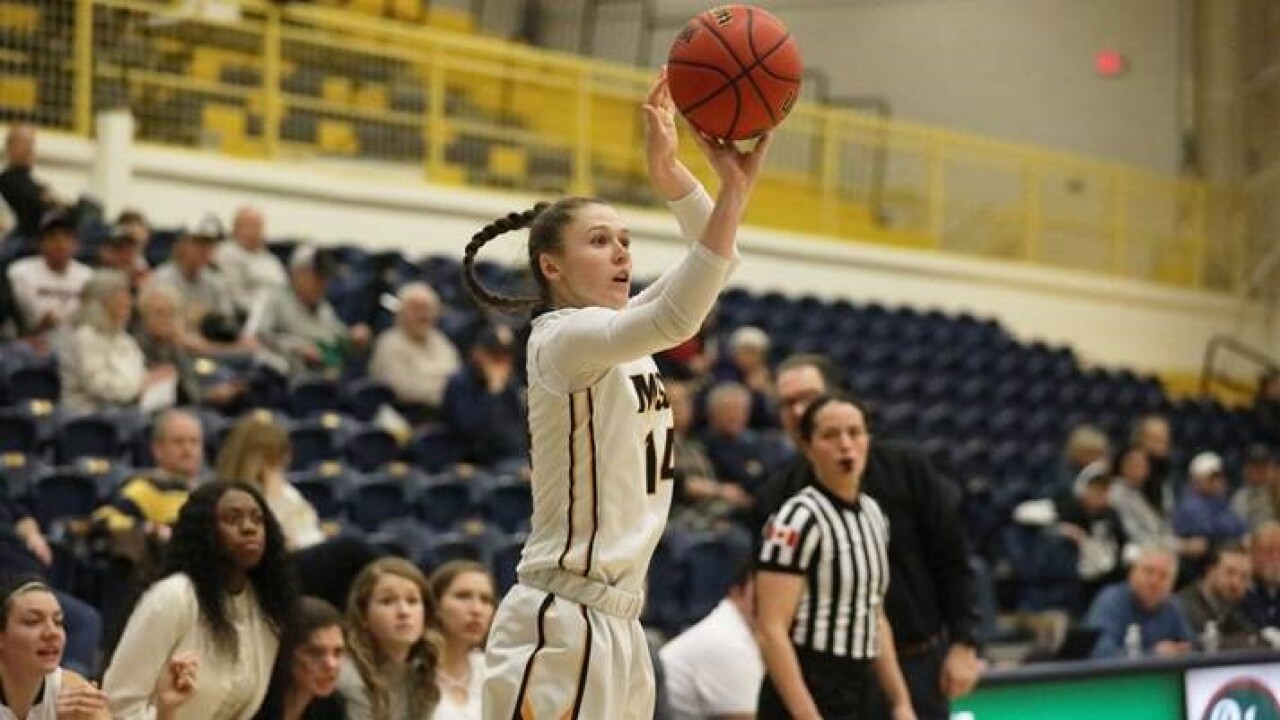 Photo courtesy MSU Billings
Jeanann Lemelin made 10 three-pointers to break her own MSU Billings record in the &#39;Jackets win over Seattle Pacific.

SEATTLE – In desperate need of a road win to stay in playoff position, senior Jeanann Lemelin delivered a record setting performance to help Montana State University Billings over Seattle Pacific University 91-66 at Brougham Pavilion Saturday night in Great Northwest Athletic Conference women’s basketball. Lemelin scored a career high 34 points and made 10 of 12 from the 3-point arc to surpass her own school record of eight made 3-pointers in a single game for MSUB.

“Jeanann was in the zone again tonight,” said MSUB head coach Kevin Woodin. “She has put a lot of time into becoming a scorer for us to make 10 threes in a single game was just ridiculous.”

The Yellowjackets (14-13, 9-9) outscored the Falcons (8-18, 6-12) by 16 in the second half to put SPU in the rearview mirror in the conference standings with two games to play. Hannah Collins (16 points, five assists), TyLee Manuel (14 points, eight rebounds), and Shayla Montague (11 points, three rebounds) also pitched in offensively for MSUB.

“It was a great GNAC road win for our team tonight,” Woodin said. “We played consistently and won every quarter which is a big challenge against anyone in our conference. Our entire team contributed to this win.”

The Yellowjackets were ahead by six after one quarter and extended the lead to double-figures 37-28 by the end of the first half. MSUB’s offense again caught fire in the second half and the ‘Jackets finished with a 55.9-percent shooting percentage in the game. With Lemelin’s assistance, MSUB connected on 18 of 26 (69.2-percent) from beyond the arc, a season high.

The ‘Jackets held a narrow 30-29 edge in rebounds and scored 24 points off turnovers, compared to just eight for SPU. Coming off the bench, Emily St. John passed six assists and nabbed four steals. “Our team defense and rebounding was solid tonight,” said Woodin. “We shot the ball incredibly well from the 3-point line and got the ball into the paint on a consistent basis.”

Hailee Bennett led Seattle Pacific with 21 points (7-for-10). Natalie Hoff scored 11 points and nearly missed a double-double with eight rebounds. The Falcons shot 43.4-percent overall (23-for-53) and 44.4-percent (8-for-18) from the 3-point line. SPU led by a point at the midway point of the first quarter before the Yellowjackets took over the rest of the way.

After falling to Saint Martin’s (14-11, 9-9) on Thursday, the Yellowjackets vaulted back to a tie for the sixth and final post-season position with the win Saturday. MSUB hosts both Western Washington (18-7, 12-5) and Simon Fraser University (17-11, 12-6) at home to finish the regular season next week beginning Thursday at 5:15 p.m. Four teams have clinched a berth to the GNAC Championships with Central Washington (16-10, 11-7), Saint Martin’s (14-11, 9-9), and MSU Billings (14-13, 9-9) still jockeying for the final two spots. The Saints have won five straight games while the Wildcats have won two.

THE BUZZ: Jeanann Lemelin was named St. Vincent healthcare player of the game for MSUB. Lemelin tied the MSUB school record earlier this season against Saint Martin’s with eight made 3-pointers in a game, then surpassed it Saturday with 10 makes against SPU. Lemelin was two 3-point shots short of the conference record of 12 (Elisa Homer, SFU, 2016). Lemelin has two 30+ point games this season and 15 games in double figures.