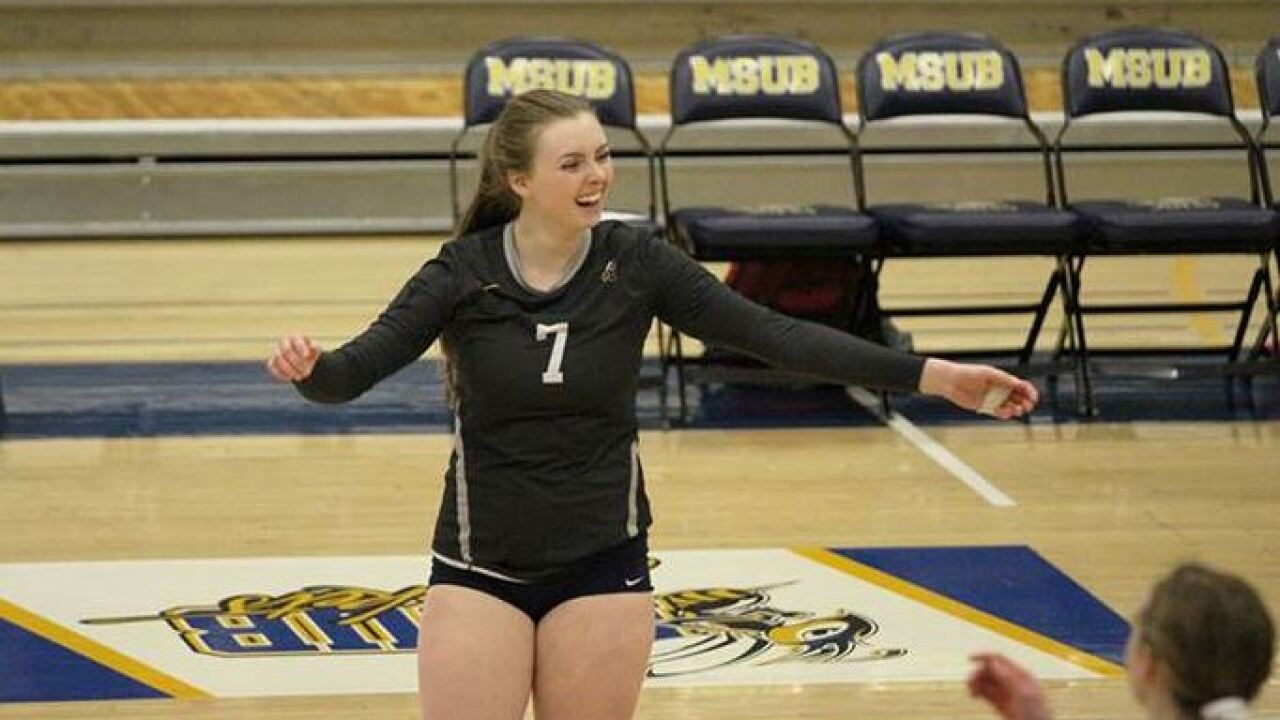 BILLINGS – MSU Billings hosts Concordia University on Thursday with the opportunity to begin 1-0 in the Great Northwest Athletic Conference at 7 p.m. at Alterowitz Gymnasium. The team then plays Western Oregon on Saturday, at 7 p.m. Both matches will feature live video with play-by-play commentary and live statistics, available through MSUB's website.

The Yellowjackets (1-7) played two non-conference away tournaments to open up the regular season and will be looking to break up a five-match losing streak against the Cavaliers Thursday night in the home opener.

The Yellowjackets suffered a 3-1 loss to Academy of Art Saturday in the final game of the West Region Showcase tournament in San Diego, California. After winning the first set 25-23, MSUB fell behind in each of the final three sets to lose their fifth straight outing. Despite the loss, Maddie Vigil had a double-double with 13 kills and 10 digs. Marissa Logozzo also posted a season high 27 digs for MSUB.

MSU Billings ranks 10th in the GNAC with a .100 team hitting percentage and last in opponent hitting percentage (.254). The ‘Jackets rank ninth in kills (10.48 k/set) and 10th in assists (9.72 asst/set). Similar to last season, MSUB has fared well with 48 total service aces and is fifth with 1.66 service aces per set. On defense, the ‘Jackets are fifth with 15.62 digs per set for a total of 453 through eight matches.

Junior middle blocker Joelle Mahowald continued her strong start last week in San Diego and is up to eighth in the GNAC with a .275 hitting percentage and 58 total kills. Mahowald is inching closer to the top-10 in blocks with 0.86 blocks per set for 13th in the conference. She recorded a season high 15 kills September 6 against South Dakota School of Mines and Technology.

Maddi Vigil leads the ‘Jackets with 78 kills (2.69 k/set) and a .118 hitting percentage. Bayli Monck is second with 70 kills and is hitting .181. Skylar Reed has chipped in 51 kills from at outside hitter and Mahowald has 58 kills in the middle.

Freshman Makayla Baca has 11 service aces (0.38 aces per set) to lead the Yellowjackets. She ranks 13th in the GNAC behind Maggie Schueter (UAA) and Vanessa Hayes (UAA) who lead with 21 service aces apiece.

Concordia and Western Oregon play each other Tuesday night at LCEF Court. Despite a 2-5 start to the fall, the Cavaliers have won their last two matches against Dominican University on Friday 3-0 and Fresno Pacific University on Saturday 3-1. It is also notable that three of the Cavs’ five losses have been five-set affairs which each deciding frame being by five or fewer points.

Sophomore Katelyn Brandenburg is off to a solid start with 50 kills (1.79 kills per set) and a hitting percentage that ranks No. 9 in the GNAC at .265. Sophomore Camille Guerrero recorded 14 kills Saturday against Fresno Pacific and has double-figure kills totals in six of her seven matches played. She is also a strong server with 16 total service aces.

The ‘Jackets have never defeated Concordia since their first meeting in October, 2015 and are currently 0-8 all-time. Last year, the Cavs slipped by MSUB 3-1 in both home and away matchups.

The Wolves cruised to a 3-0 victory over Notre Dame de Namur in their last outing and struck 31 kills in the process. Sianna DeCarli led the way with nine kills and Aubrey Stanton had 19 assists and eight digs. DeCarli leads the team with 67 kills and 13 blocks through seven matches. Lauren Smith has added 32 kills and Kimmie Bain has 30 kills. Stanton has been a regular starting setter and has 1645 assists with 7.13 assists per set. She also has six service aces.

Last season, Western Oregon dominated the Yellowjackets 3-0 in Monmouth but MSUB rebounded for a 3-1 win in Billings on senior night. Bayli Monck put away 14 kills in the latter and Skylar Reed had 12 kills for MSUB. The Yellowjackets are 9-19 all-time against WOU in matches dating back to 1986.