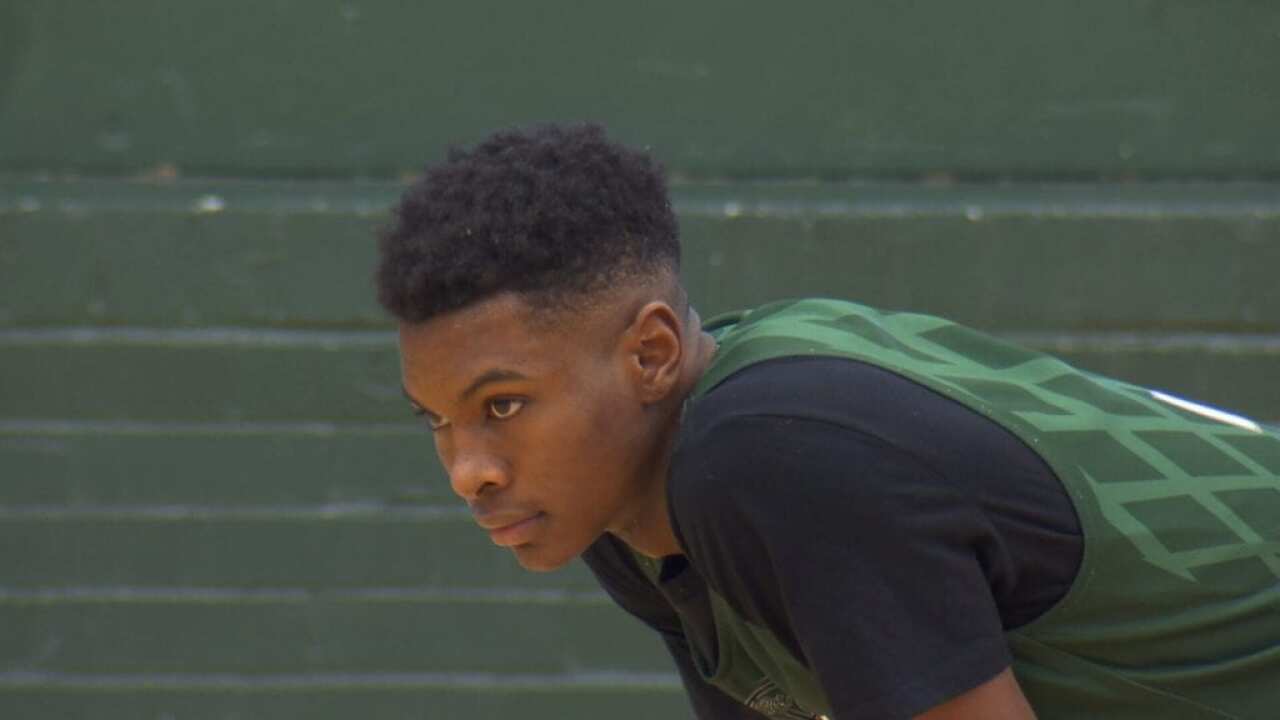 BILLINGS - Chrishon Dixon was not starting as the 2019-2020 men’s basketball season commenced against Fresno Pacific University at the West Region Crossover Tournament in San Diego, California on November 8. However, in only a few short weeks Dixon had cracked the starting lineup against longtime Montana State University Billings rival, Rocky Mountain College, and has no plans on relinquishing that spot. Now, over two months have passed and Dixon has played in each of the team’s 16 games and started each of the last 12 in a row, not an easy feat for a true freshman who is only one year removed from his senior season at Billings Central High School.

Despite his rapid success, when asked about the hot start to his college career Dixon humbly deflected the question and credited various figures in his life that have played key roles in helping him become an MSUB Yellowjacket. Dixon credits his dad, uncle, and senior teammate Tyler Green as some of the most significant influences in his life, both on and off the court. Transitioning from an elite all-state player during his prep years, to a mainstay in the ‘Jackets lineup in less than a year is no small victory and is something he has dreamed of since he was young.

Dixon was born in Richmond, California, but moved to Billings when he was 14 and has a lot of family in the state of Montana, which is something the MSUB coaching staff is constantly in search of. They pride themselves in finding elite talent inside the state and were thrilled Chrishon chose to sign his national letter of intent (NLI) for the ‘Jackets.

“We were excited Chrishon chose MSUB”, said MSUB head coach Mick Durham. “We want Montana kids in our program and getting someone from Billings to stay home is extra special for our program. He brought toughness to our team at the point guard position along with great character, leadership, and a winning attitude. Chrishon is a very talented player who has big upside.”

A multi-sport athlete in high school, Dixon excelled in basketball and football, leading Billings Central Catholic High School to a state championship in both sports his senior year. Dixon scored 1,090 points and grabbed 475 rebounds during his prep years. As a senior he was an incredibly balanced player, averaging 12 points, 5 rebounds, and 5 assists per game. He was highly decorated, a four-time all-conference selection, three-time all-state selection, and the basketball state tournament’s most valuable player his senior year. A remarkable talent in both sports earned him numerous opportunities to play sports at the next level. He had offers from both the University of Montana and Montana State University Bozeman to play Division I football. In addition to MSUB, he received offers from Montana Western, Carroll College, and College of Idaho to play basketball.

With so many different options, how could he possibly decide which was the best route to take? What would be an incredibly difficult decision for most, was actually fairly easy for him. “MSUB gave me the option to play at a high level and the opportunity to fly and see new places that I wouldn’t have otherwise”, Dixon said. Moreover, when it boiled down to it, football was fun, but basketball is his passion. “I picked MSUB because I love the game and have more fun playing basketball.” Basketball has always been a huge part of his life, having played for as long as he can remember. Some of his most fond memories include watching the Los Angeles Lakers (his favorite team) play on tele­vision. He would analyze the moves the players were using and go to his backyard basketball hoop and try to imitate those moves on his uncle Kenneth, who would consistently encourage and train him during the early years of his life. It was through this experience, and a few others, where Dixon credits the birth of his deep-rooted love and passion for basketball.

When he moved to Billings at the age of 14, a potential career and future in basketball began to come into focus for the first time. Dixon credits his father Chris for helping him the most during that crucial time. His dad was the one who helped nurture that love and passion for the game that had sprouted in California, nurturing and developing Dixon’s skills on more of a professional level. Taking him to games, practices, and getting him involved with the Amateur Athletic Union (AAU) were a few of the numerous things he did to help Chrishon. When asked if there was a specific moment when he realized he had a legitimate future in basketball Dixon spoke about playing AAU basketball in the summer going into his junior year of high school. In his most memorable game, he scored 15 points, grabbed seven rebounds, and had five assists. It was in this game that he first attracted the attention of college coaches. One of his most apparent skills was his ability his ability to steal the ball from his opponent. “The part that got me noticed was picking up 94 feet getting steals.”

In addition to Dixon’s dad and uncle, he has had various other role models in his life that have helped shape and mold him into the person and Yellowjacket student-athlete he is today. At the guard position, it is only natural that one of his favorite NBA players to emulate is Chris Paul, the starting point guard for the Oklahoma City Thunder. His keen eye and attention to detail, along with his ability to command the floor has distinguished him as one of the best guards the NBA has ever seen. Likewise, Tyler Green (senior guard for the Yellowjackets’) is currently one of the best guards in the Great Northwest Athletic Conference (GNAC), and a significantly influential figure in Dixon’s life right now.

“Playing for MSUB has been an amazing experience. I have had the opportunity to learn under a new coach, gel with my teammates, and learn from Tyler Green. I have learned a lot about leadership from him and how to get guys going and take care of things.”

Green has been excelling at point guard for three years and is happy to help out Dixon in any way that he can. He has also been catching fire of late. Fresh off of a game-winning buzzer beater to best Central Washington at home, as well as a GNAC record-setting night (hitting 12 3-pointers for 38 points), he is playing his best basketball of the season. He is a leader on the Yellowjacket squad and finds joy in imparting some of his wisdom to the ‘up-and-coming’ Dixon.

“I think Chrishon can be the best player in the GNAC no doubt in my mind”, said Green. “He puts the extra time in the gym, and he takes care of himself off the court. He is one of the hardest working guys on our roster if not the hardest worker. His potential in this conference is sky high and I think he will reach it sooner than many may think.”

Green also mentioned that he has seen the most growth in Dixon’s ability to lead, not a common trait for such a young player.

“He went from just staying quiet and listening to people talk to giving out his own advice and doing the hard things that a good leader isn’t afraid to do. He is very vocal in the locker room and on the court, which helps us a lot.”

His ability to transition into being a starter and capturing a leadership role so quickly has been a significant help to fellow freshman and seniors alike, taking some pressure off of the coaching staff and veterans. Although it may seem like everything comes easy for Dixon, is has been his arduous work ethic and mentors along that way that have gotten him this far.

Dixon has excelled and enjoyed his short time as a student-athlete at MSUB, nevertheless, he has struggled at times as well. Among the most difficult challenges he has faced have been adapting to the college athlete daily schedule and finding enough time to sleep. His average day from beginning to end is as follows:

With the additional workload of games and traveling each weekend in the spring it’s likely that Dixon is perhaps busier now more than ever. Having lived the student-athlete schedule for four years now, Green too has had difficulty finding enough time to balance everything in his life. He gave some insight and advice that he hopes Chrishon can apply in his next three years:

“It seems like yesterday I was a freshman excited to start my collegiate career and was worried about too many things. I told him that it goes fast and to put his head down and grind. The grind never fails but don’t forget to enjoy the journey. The more you enjoy it the better you will play, and he seems to be having a lot of fun on the court.”

There will undoubtedly be many challenges to come for the young star, but he has been prepared and is surely up to the task. There is little reason to believe Chrishon Dixon won’t be a star for many years to come and fulfill his role as ‘hometown hero.’

“His future is very bright”, said Green. “I think I had a very good collegiate career here at MSUB, but he has the potential to do far better. He will be the name every school talks about next year and he will lead this team to great seasons in the future. Chrishon is the truth, and he’s living up to his new legacy of being the hometown hero.”