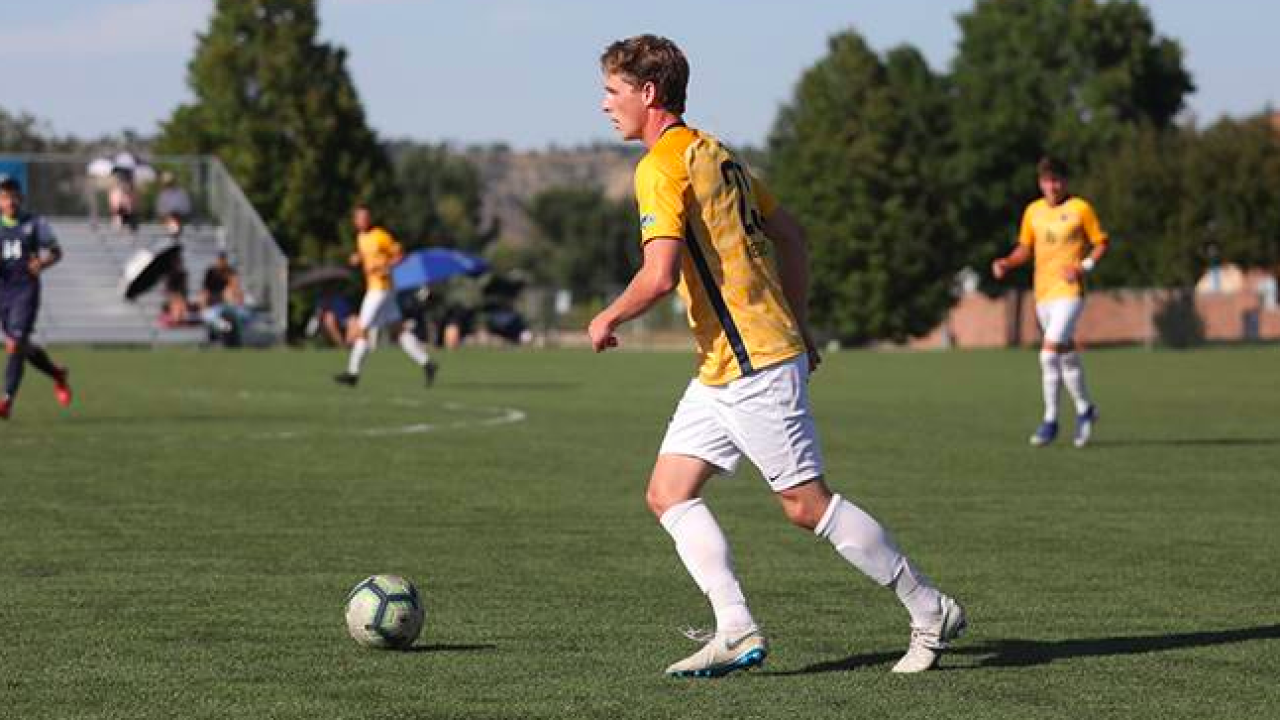 SEATTLE – A late penalty kick goal off the foot of Shantik Bedrosian was the difference in a defensive encounter between Montana State University Billings and Seattle Pacific University Saturday evening in a Great Northwest Athletic Conference men’s soccer game at Interbay Stadium. Bedrosian earned the penalty try in the 79th minute of a scoreless contest after SPU’s Jose Benavides fouled Bedrosian in the right side of the box on a missed slide tackle.

The Yellowjackets’ (6-4-1, 3-1-0 GNAC) 1-0 win over SPU represented their second straight GNAC road victory, and completed their sweep of the weekend trip after a 5-1 win over Saint Martin’s Thursday night.

Strikers for each side were kept to the outside in the first half and the teams were limited to just four shot attempts apiece. However, many more offensive opportunities emerged in the second stanza. In the 51st minute, Titus Grant earned a free kick two feet outside the top of the box. Goalkeeper Jessy Martin made the save after he dove low to his right. Ten minutes later, SPU earned a free kick from the same spot on the opposite side but it MSUB’s defensive line blocked the shot before it could get to Martin.

An ill-advised slide tackle led to the penalty kick for MSUB in the 79th minute. On the ensuing penalty kick, Bedrosian shot high and beat Lars Helleren to the upper left corner of the goal. Bedrosian ended with four shot attempts, one shot on goal, and one yellow card. He played 90 minutes and scored his third of the season.

Luca Battistotti and Samuele Folla limited Seattle Pacific to four shots on goal at defender. Grant was the only SPU starter to land a shot on frame in the game. Theo Lamare and Brian Maxwell had two shots on goal apiece in contribution to MSUB’s five-shot total. Corners were also sparse and MSUB led the category 2-1.

“We knew before the game that we needed to be ready for a physical battle and we did a great job limiting the space for the quality SPU forwards,” commented head coach Thomas Chameraud. “It was a 50-50 game and we told the guys at half time that a set piece will make the difference. We played better in the second half, put the ball on the ground, and created some good chances but unfortunately; we didn’t have the quality in front of goal like we had Thursday against SMU.”

UP NEXT: The Yellowjackets play No. 20 Simon Fraser at home Saturday, October 19 at 3:30 p.m. at Yellowjacket Field. It will be the first meeting of the fall between the clubs.

“Getting two wins on the road is obviously a good performance,” Chameraud said. “Now we are at home for three weeks and we have a big game coming up next Saturday with SFU. We will have to prepare really well in order to get a result.”

THE BUZZ: …MSUB has won three straight matches at Interbay Stadium against the Falcons and has not lost in Seattle since 2015…Shantik Bedrosian was named St. Vincent Healthcare player of the game. The junior forward has six points in his last three starts.