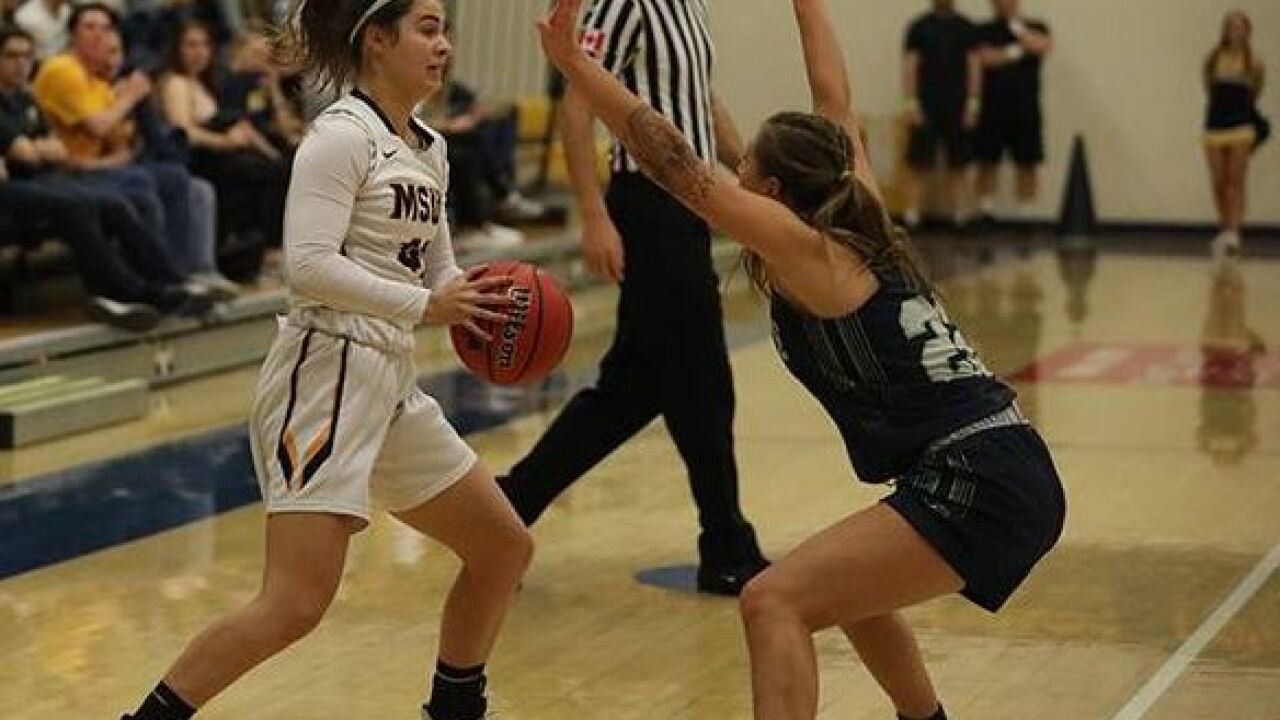 SPEARFISH, S.D. – Alyssia Martinez had 12 points and seven rebounds and Black Hills State University used a balanced effort to put away Montana State University Billings 60-42 in non-conference women’s basketball at Donald E. Young Center Wednesday night. MSUB showed flashes of brilliance but committed 26 turnovers and shot 30-percent from the field, which contributed to the loss. Kate Sams made a positive impact off the bench with four steals, six points, and two rebounds in nine minutes on the court for MSUB.

“We got off to a good start, for the second game in a row, but other than the first few minutes we struggled, especially on offense for most of the night,” said MSUB head coach Kevin Woodin. “They did a good job of attacking the basket and I felt defensively, our help side and just our overall energy needed to be better. Offensively, we need to make our open shots at a much higher rate and find more way to get open shots.”

MSU Billings (0-4) failed to carry momentum from an exhibition win at home last week against University of Providence. They will return to Billings to play South Dakota School of Mines and Technology Saturday night at Alterowitz Gymnasium. More than five years have passed since the two teams went head-to-head, but MSUB fell to 5-2 all-time against Black Hills State.

MSUB opened the game with a 9-5 advantage. Emily St. John and Hannah Collins drove to the basket and gave MSU Billings an immediate spark. Black Hills State recovered quickly. Noora Parttinaa hit back-to-back 3-pointers to start a 15-0 run leading at the end of the first quarter.

BHSU continued to shoot well in the second quarter and drew 12 first-half turnovers from MSUB players. MSU Billings shot 41.2-percent (7-for-17) in the opening 20-minutes and went 0-for-4 from the 3-point line. On the other end, Black Hills State made 50-percent (14-for-28) from the floor with a pair of threes. Black Hills State nearly doubled MSUB’s first half rebound total 19-10. Martinez led the way for BHSU with eight points.

MSU Billings made frequent trips to the free throw line in the third quarter, but saw their shooting percentage dip to 27-percent. BHSU’s Racquel Wientjes made an impact from inside and reached double-figure scoring while MSUB committed eight, third-quarter turnovers and trailed 49-31 at the break.

“I thought our bench came in and played well initially in the third quarter and we almost got it back to single digits, but we missed our opportunities and Black Hills State was able to pull away,” Woodin said.

Shayla Montague opened the fourth quarter with a 3-pointer, but turnovers and a low free-throw percentage continued to plague MSUB down the stretch. MSU Billings shot 30-percent in the game and 7.1-percent (1-for-14) from 3-point range. Black Hills State scored at a 34-percent clip, including 52-percent in the first half. BHSU received 32 points from their bench and three players contributed five or more rebounds.

“It seemed we had very few offensive rebounds until the last quarter of the game,” Woodin said. “26 turnovers was way too many against a team that did not extend their defense into the full court. We must be better there. Give Black Hills State credit. They executed better on both ends of the floor than us. I thought Kate Sams was very impressive coming off the bench but as a team we need to be much better.”

Kate Sams was named St. Vincent Healthcare player of the game for MSUB.