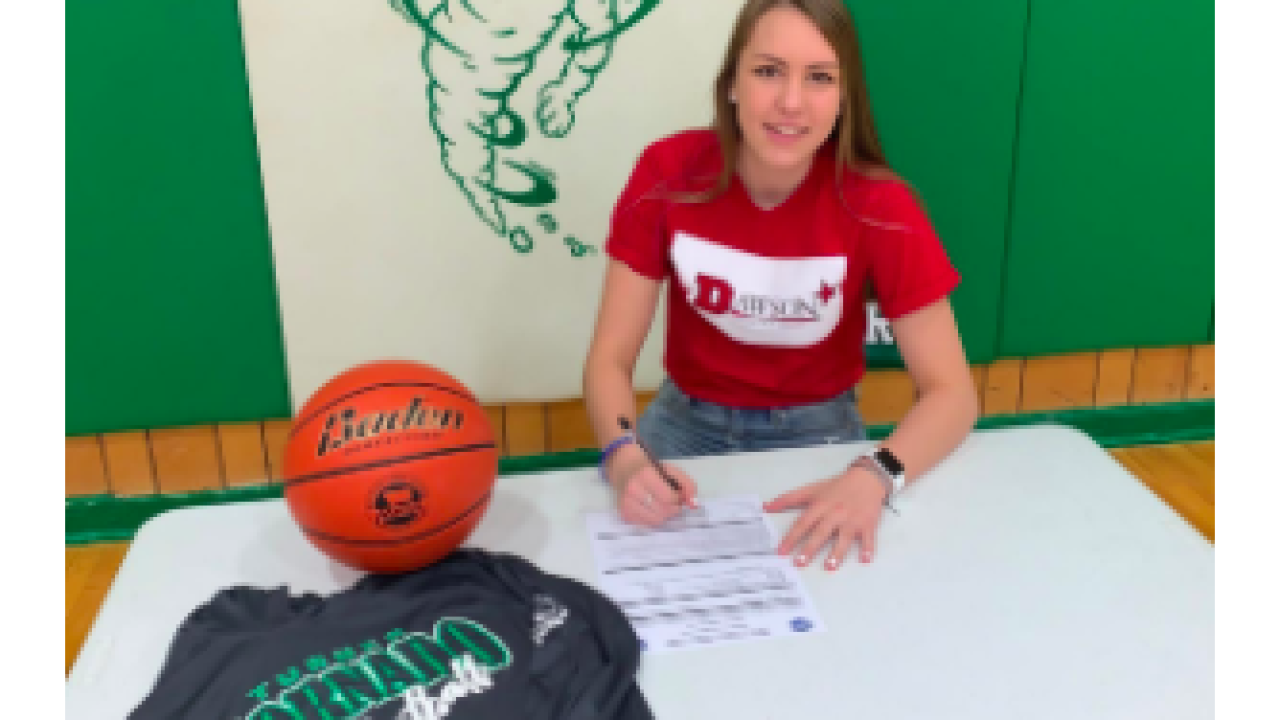 "Sarah is truly our kind of guard. I remember scouting her at the Treasure State Classic last spring, and marked in my notes 'Sign Her' next to her name," Lagmay said. "But I tucked those notes away, and forgot about it for a while. It wasn't till Coach Graham at Belt reminded me she was still available as I was in the recruiting process after signing one of his players. It was pure excitement when Sarah, and her parents and I got in touch, and it was a done deal. The style we play, is the same as her style. She's so tough and competitive, and loves the game. Her driving skills are so effective, she is either making the basket or getting fouled. We can't wait to get her into uniform and surround her with our talented cast."

The Hogeland, Mont. native has been effectively playing varsity since her 8th grade year. She was a part-time starter in 8th and 9th grade, and then became a consistent starter as a sophomore for the next three years, leading the Lady Tornadoes to successful, winning records since the 2016-2017 season.

"I chose Dawson for its location and its reputation," Billmayer said. "I grew up with a small town community feel. Dawson has that feel. I am passionate about the game and I am blessed to get this opportunity to fulfill my passion. This is my opportunity to push myself to become a better person and player. I look forward to playing with others who will challenge me at every level because I know there is more in me to make myself better. I am excited to play with this team, and create a strong bond between myself and my teammates. There is nothing stronger than working together as a team to create a chemistry that is unbeatable. I am looking forward to feeling like Dawson will be a second home."

For five years, Billmayer has been part of monumental status throughout her playing career. She has not only excelled in basketball, but been successful in volleyball and track as well. In volleyball, she was voted First Team All-Conference in her senior year, and Academic All-State in her junior and senior years. Sarah was also awarded the Iron Lady Cat, for not missing any practices. A letterman track athlete since her freshman year, Sarah was voted Academic All-State 3 years starting her sophomore season and competed in many events, such as the long jump, triple jump and 300 meter hurdles. She received the Track High Point honors, which is awarded to the team's athlete who scored the most points throughout the season.

In basketball, the Class C school accomplished lots of historical success. In 2017-2018, Turner made it to the Divisional Tournament for the first time since 1996-1997, by placing third in Districts. The next year, Turner placed third again in Districts and fourth at Divisionals. This past season, the Lady Tornadoes made it the District Championship for the first time since 1997, losing to the #1 team in the state, Fort Benton.

Not only has Turner had success as a team, Sarah had several accomplishments of her own. Averaging 18 points, 6 rebounds, 5 assists and 4 steals, Billmayer was voted First Team All-Conference and All-State the last two years. For 3 years in a row, starting her sophomore season, she was voted the Team's Miss Defense and Offense, and had the team's most assists and steals, and was Academic All-State. She was also voted Scholar Athlete and MVP her sophomore and junior years. Sarah participated in last year's Treasure State Classic as a junior, and was selected again to the Classic, as well as the HIT Tournament in Havre this spring. Early in her senior season, Sarah surpassed the 1,000 point club.

"Sarah is a tough, gritty player with lots of heart," said Turner coach Julie Welsh. "We call her the seamstress because she often could thread a pass into someone that we didn't think could catch the ball. She started out a pretty darn tiny thing since the fourth grade, but has grown into a formidable athlete. Sarah has invested in working hard to develop her skills as a ball handler and shooter. She has been a great player for many years and we are so proud of her accomplishments and excited to see her skills improve with the coaches and players at Dawson Community College!"