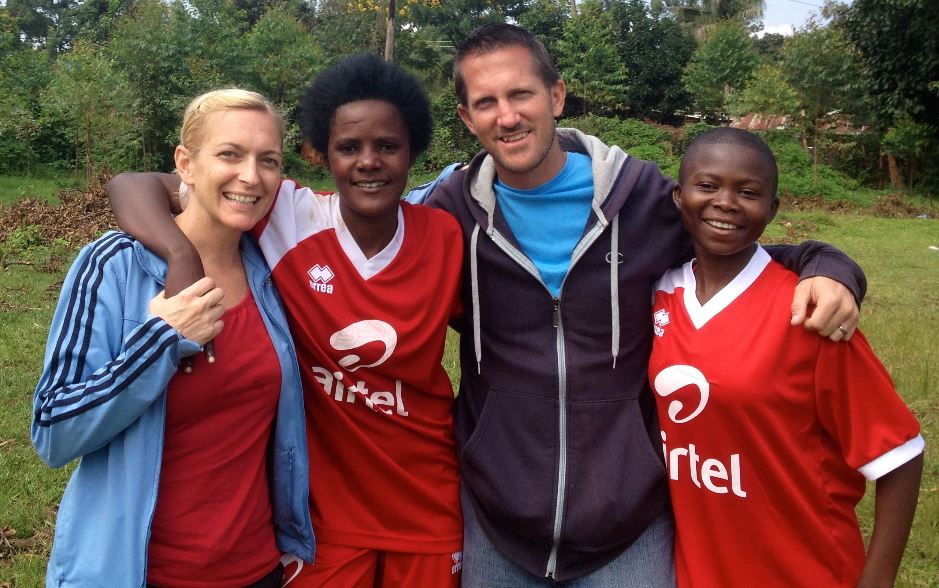 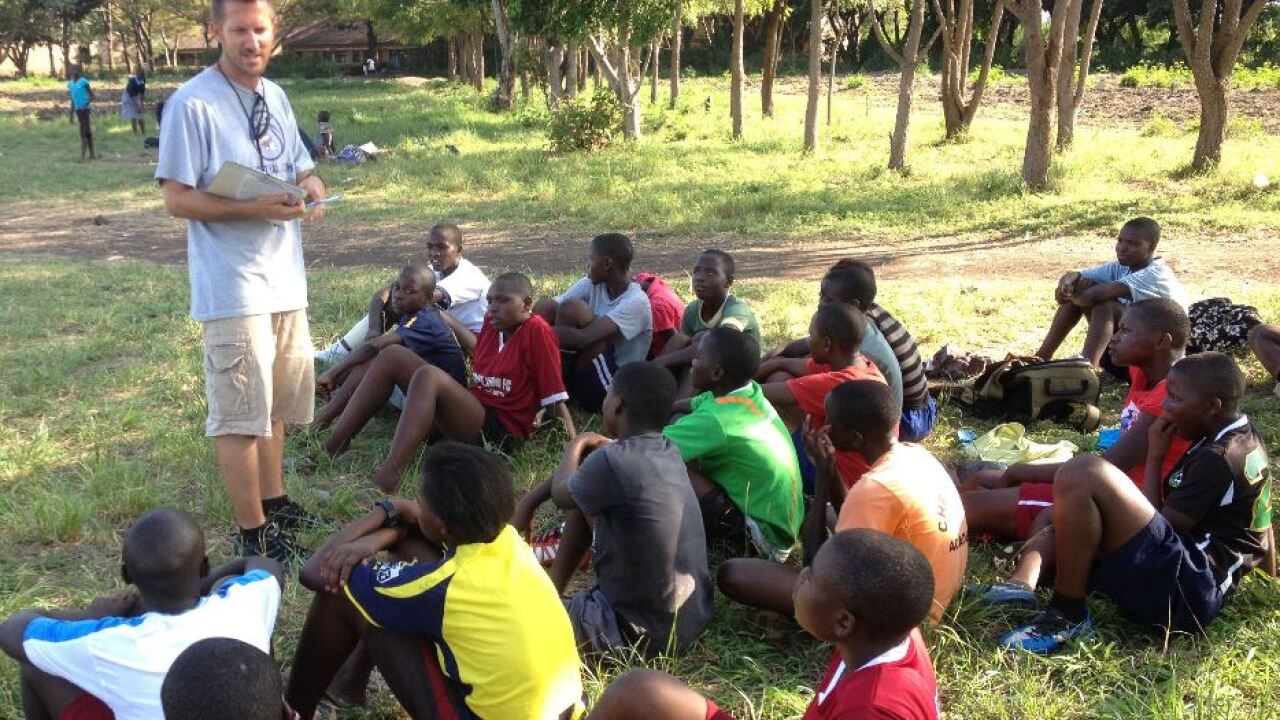 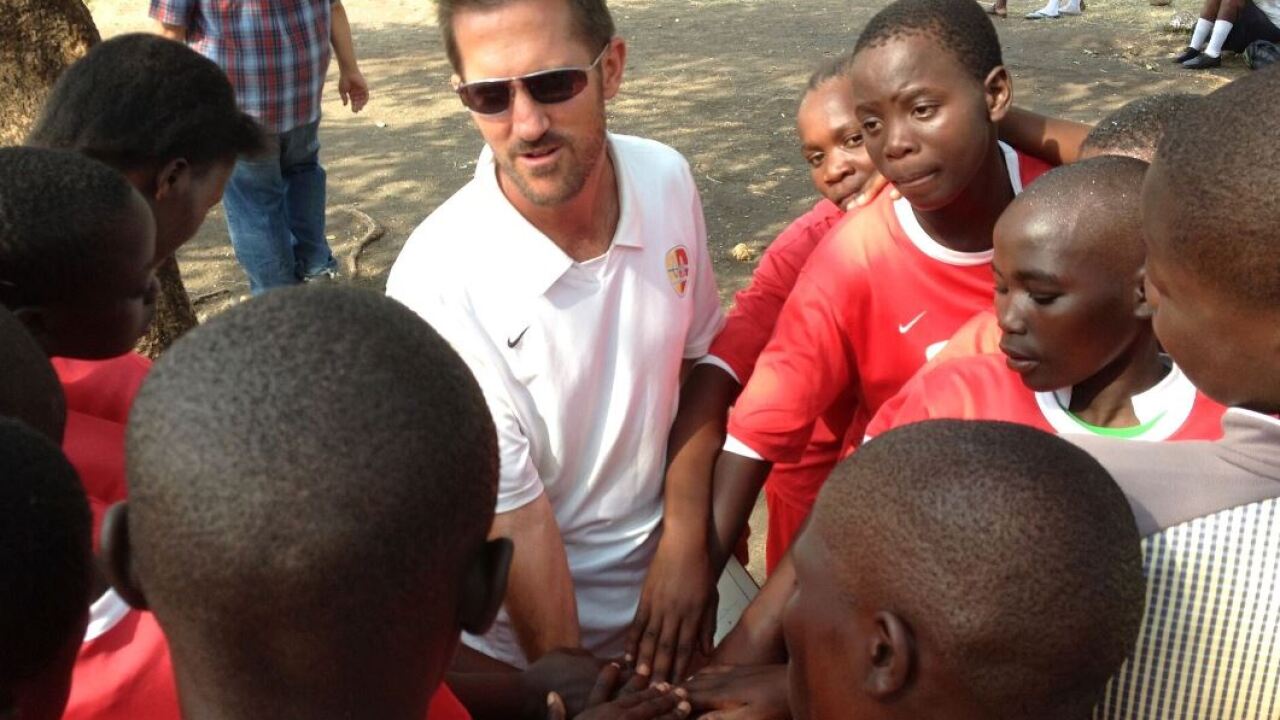 He grew up in Arizona, played junior college basketball at Dawson Community College in Glendive and finished his collegiate career as a first-team all-conference guard at Rocky Mountain College in Billings. And that was just the start.

Peterson went on to teach at Billings West High School and coach with Bill Dreikosen at Rocky. He earned a Division I job on Mike McConathy’s staff at Northwestern State University (Natchitoches, Louisiana) and helped the Demons to their first-ever NCAA Tournament appearance and victory in 2001. Shortly after, he was hired as an assistant at Charleston Southern University from 2001-03.

That's when Peterson left life in America to serve at a rural Kenyan school teaching, and later coaching, orphans whose families were affected by AIDS. He stayed at Christ’s Gift Academy for 11 years, eventually launching The Suba Lakers Soccer Club for Kenyan girls while teaching life skills and encouraging them to stay in school.

Not long after, Peterson and his wife, Daneen, returned to the states in 2014 where his path led back to Dawson Community College. He was hired to replace legendary men's basketball coach Don Mast and ended up with the athletic director's job, as well. Peterson, in his fifth year of navigating the challenges of both at the two-year school, visited with MTN Sports for this week's Sunday Conversation.

Joe Peterson: "Yeah, I really was hired as the basketball coach. When we (with wife Daneen) had moved back from Kenya, we settled in Colorado for a little while. And just four or five days after, I started looking for jobs in different fields. Coach (Don) Mast, who’d been here for 25 years, retired. I kind of brought it up to my wife, thinking she wouldn't really be interested in moving to Glendive and being a coach's wife, but she told me to apply, so I did and they hired me. This was back in June 2015. Then, they also were, at the same time, kind of interviewing for the athletic director position and so I thought that that might be a good combination. I interviewed for it and had that degree, a master's degree in sports administration, and about two weeks after I had the coaching job, they hired me as the athletic director."

Peterson: "Yeah, well, I coached actually a few years of Division I level down in Louisiana and South Carolina, and I was just working my way up. I thought coaching, that’s what I was going to do for the rest of my life. God had a different plan and called me to Kenya, and I resisted at first but then eventually decided to go for a year, and that one year turned into 11 years. But I really think that leaving Arizona where I grew up and coming to college in Glendive, Montana, I think that was part of the preparation for me to be able to go overseas. Just adjusting to a different culture and in all of that, I think coming here (to DCC) was a huge part of me being able to go to Kenya when I did."

MTN Sports: What did you do (in Kenya)?

Peterson: "I worked at a school for orphans ... a school in the district with the second-highest HIV rate in Africa. So, tons and tons of orphans because so many parents have died from HIV. I was working in the school teaching, coaching, administration. I started a sports program there, started a soccer club for girls. It was just an amazing amazing experience. I thought I was going to live there for the rest of my life, actually."

MTN Sports: Let’s fast forward now to becoming head men’s basketball coach and athletic director at DCC. How do you balance the two?

Peterson: (Laughs) "That is an excellent question. Some days I do better than others. It’s really like having two full-time jobs. Definitely during basketball season, my focus is on basketball as much as possible, preparing for games and getting my team ready to practice. And when I’m outside of actual basketball season, a lot more focus goes on the A.D. responsibilities when volleyball is going on and baseball and softball and rodeo and cross country and so on. But it is kind of an endless stream of people coming into the office, from my players, the other coaches and the other players from other teams that need things. It is tough sometimes. I think some days, it’s really frustrating for me because I don’t feel like I can do both jobs as well as I would like because I am pulled in so many directions. But the thing is, I love both jobs."

MTN Sports: I think a lot of people would be surprised at knowing how many hats not just you wear, but your entire coaching staff.

Peterson: "That’s the beauty of junior college. You really get involved with every aspect of your program, so each of our coaches is responsible for recruiting every student-athlete they get and for helping them academically, making sure you’re following up the academic progress, teaching and training them in the sport that they are there to do. You've got to do your travel, book your buses and your hotels and your meals, and then you come back and turn those receipts in and do all of that. And then, after the games, they're writing press releases and trying to get their information out there and promote their program and on social media, as many ways as they can, and that’s just their coaching part. All of our coaches here are half-time. That means they have another job, too. Our women’s basketball coach Romeo (Lagmay, Jr.), does the sports information directing us, our softball coach (Jim) LeProwse is teaching welding from 8 in the morning until about 2 in the afternoon. Coach (Phil) McClure in baseball teaches several classes during the day. Everybody’s got a different job, and so it’s a lot of balancing."

MTN Sports: I know as a basketball coach, you’re pretty proud of the number of Montanans that have come in here and contributed.

Peterson: "Yeah, I think every program in Montana tries to recruit Montana, and I think we’ve been very blessed. Out of the five years I’ve been here, we’ve had some great players from Montana. They don’t just come and fill out the roster, not just just practice players or role players, but guys that are leading our team. I think we have really good high school coaches that do an exceptional job of teaching the game to our kids, and the Montana guys that we get in here, they know the game and play really, really hard. And I think their character rubs off on others and it really makes a difference. My first year, Evan Jones and Christian Kappell from Laurel and Billings West were both all-conference and all-region, led us in scoring. Brent Finn from Big Timber, a couple years ago, was all-conference and first-team all-region, went on to really shine at the Division II level down in Texas. Now, he’s back redshirting at Montana State. He was our leading scorer when we went 24-8 two years ago. So, I love the fact that this program gives these Montanans an opportunity to come and develop.That's what we’re all about, is developing these players so they can move on to higher levels and excel, not only as basketball players but also as students and people, too."

MTN Sports: From a competitive standpoint, you get two years with these kids. That’s it. How challenging is it to build a team that’s got chemistry and win?

Peterson: "You know, it’s got its positives, but it’s also got his negatives. When you have a bad year it’s a lot easier to rebuild the second year. But when you have teams like we have this year, when you have a group of guys that you just love being around and that play hard and soak in what you’re teaching them, you'd love to be able to have another year or two with them. But, it’s not like a four-year school because you have freshmen, and then you've got second-years. So, at four-year schools, you're building and a lot of your players are juniors and seniors. Well, the most experienced guys we have have just been through it for a year. So, sometimes, they think they know it all. But they're still sophomores and we try to help them understand that they need to stay humble and need to keep learning, and just because you to do it once doesn’t mean you know it all."