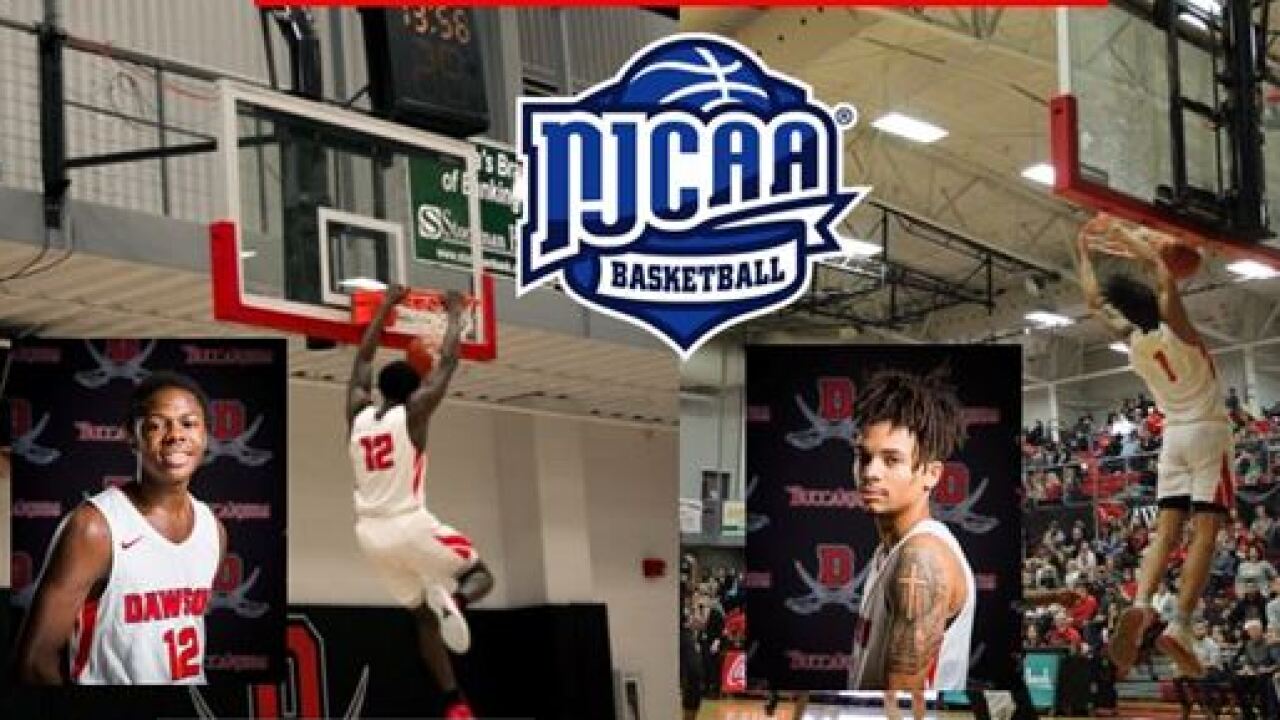 Cam'ron Dunfee and Man Man Baker were among the eight selections for the NJCAA Division I Region XIII Team.

Dunfee and Baker helped lead Dawson to a 27-7 record on the season, winning the Mon-Dak Conference Pre-season Tournament, the regular season title, and the Region XIII Championship. The Bucs season ended with a loss in the District Championship against Indian Hills Community College which is seeded as the overall #2 team at the National Tournament which starts next week. The pair of Buccaneers won 47 games over their two year career at Dawson.

Dunfee was the leading scorer for Dawson this year, scoring in double digits in 26 of their 33 games. He scored over 20 points six times and over 30 points twice; with 32 points against North Dakota State College of Science and a career high of 37 points at United Tribes Technical College. Dunfee averaged 16.1 ppg and 3.5 rpg while shooting 48.5% from the field, 44.1% from 3 point range and 80% from the free throw line. He comes from Castle Rock, Colorado.

Baker is a 6'0 guard from Aurora, Colorado. He scored in double figures in 28 of the Bucs 33 games this year with a season high of 22 points in the season opener vs. Miles Community College and on the road at Northwest College. Baker was named the Mon-Dak Preseason Tournament MVP and averaged 11.1 ppg, 5.8 rpg, 4.3 apg and 2.4 spg. Baker led the conference in field goal percentage, shooting 57.5%. He was also 5th in assist to turnover ratio, 3rd in steals (2.4), 2nd in steals per 40 minutes (4.4), 3rd in assists per 40 minutes (8.1) and 8th in offensive rebounds per 40 minutes (4.6). His season high in rebounds was 10 at Dakota College Bottineau.

Head Coach Joe Peterson talked about Dunfee and Baker, "These two guys were big-time difference makers for us this year. Cam's consistency and efficiency were a huge part of our success and Man Man's toughness, athleticism and play-making made him a tough match-up for anyone. They deserve any recognition they get! I know both of them will keep improving too because of their work ethic and athleticism. I'm excited to see what their future holds."