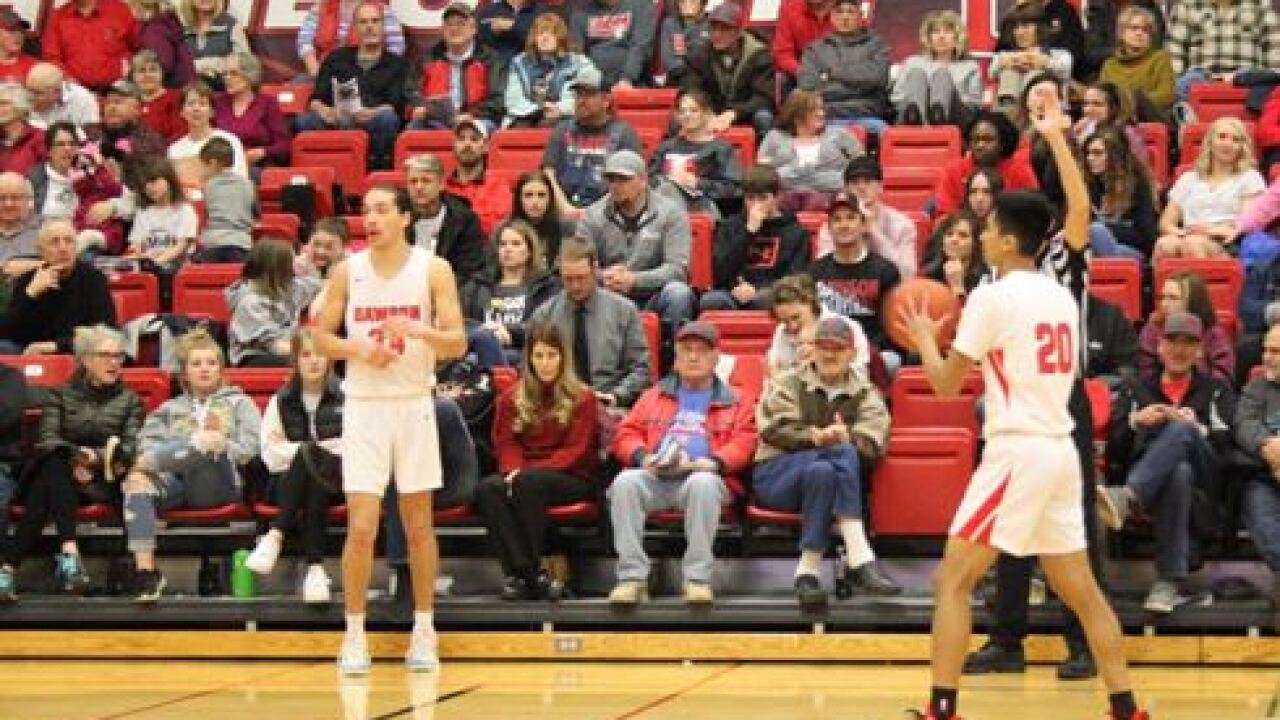 GLENDIVE - The Dawson Buccaneers won their 10th men's basketball game in a row and improved their conference record to 9-0 with a 106-100 win over the visiting North Dakota State College Wildcats. NDSCS came into the contest a game behind Dawson, but with the loss they drop to 7-2 in conference and 20-4 overall.

"What a great college basketball game this was! It was fun to coach in, fun to play in and I'm sure it was pretty fun to watch as well," said Bucs coach Joe Peterson. "Last time we played them it was a defensive slugfest, but this time around the offenses were really clicking. Our guys have such a strong belief in themselves and always feel like they are going to win, no matter the circumstances. With our depth, togetherness and effort, we play a full forty minutes. We've been taking other teams' best shots over the past few games, but still manage to make the plays necessary to come out on the winning side."

Duoth Gach made a 3-pointer in the opening minute of the game and kept hitting all night long for the visiting Wildcats, finishing the game with nine 3 pointers. He came into the game needing 11 to break the school's all-time record. He made his 9th with ten minutes remaining and the Bucs didn't allow him to make another the rest of the way.

The first half was a tight affair with 9 ties and 9 lead changes. The largest lead for either team was four points until the final minutes. With the score tied, Dawson closed out the final three minutes of the first half with a 14-6 run on the shoulders of three Camron Dunfee 3-pointers to go up 53-45 at intermission. Dunfee and Gach both connected on five 3-pointers in the opening half.

In the second half, NDSCS made their run at the 17:00 minute mark, outscoring the Bucs 10-0 to take the lead 64-54. They connected on several free throws in that stretch and the run was capped with another Gach 3-pointer. There were ten more lead changes after that as the teams exchanged blow for blow. Down by four, Dawson closed out the game's final five minutes with a 16-6 run to garner the come from behind win and tighten their grip on first place in the Mon-Dak Conference.

The Bucs are now 20-6 on the year and will travel to Lake Region State College for a Sunday afternoon matchup before returning home next Thursday for a showdown with Williston State College.

The Lady Bucs struggled once again on the offensive end, losing 62-52 to North Dakota State College of Science. The win improves NDSCS to 19-5 overall and 6-3 in conference while Dawson stands at 12-14 overall and 4-5 in conference.

Dawson shot a mere 25% from the field, only making 16 of 63 shot attempts. NDSCS shot a solid 42% from the field with 4 players in double digits. The Lady Bucs were led by Megan Lindbo with 14 points and Ashley Orozco with 12 points, to go along with 7 rebounds, 6 assists and 3 steals. Dawson was also outrebounded 34-47 on the night.

Head Coach Romeo Lagmay, Jr. explained the team's puzzling outcomesh,"I've said it all season. We're a team that can beat anyone, as well as lose to anyone. We play solid total team effort on defense: rotations, deflections, pressure on the ball and forcing turnovers. But when we get to the offensive end, we just seem to struggle consistently scoring, or rather scoring from those that are expected to score. We've had two solid scorers for the most part, but we are desperately needing others to step up. Until that time comes, we will continue to struggle making baskets. No matter what, we will continue to fight because that is something we have never questioned throughout the year."

The Lady Bucs will be on the road visiting the Lady Royals of Lake Region State College in Devils Lake, ND on Sunday, February 9 at 1:00 p.m.