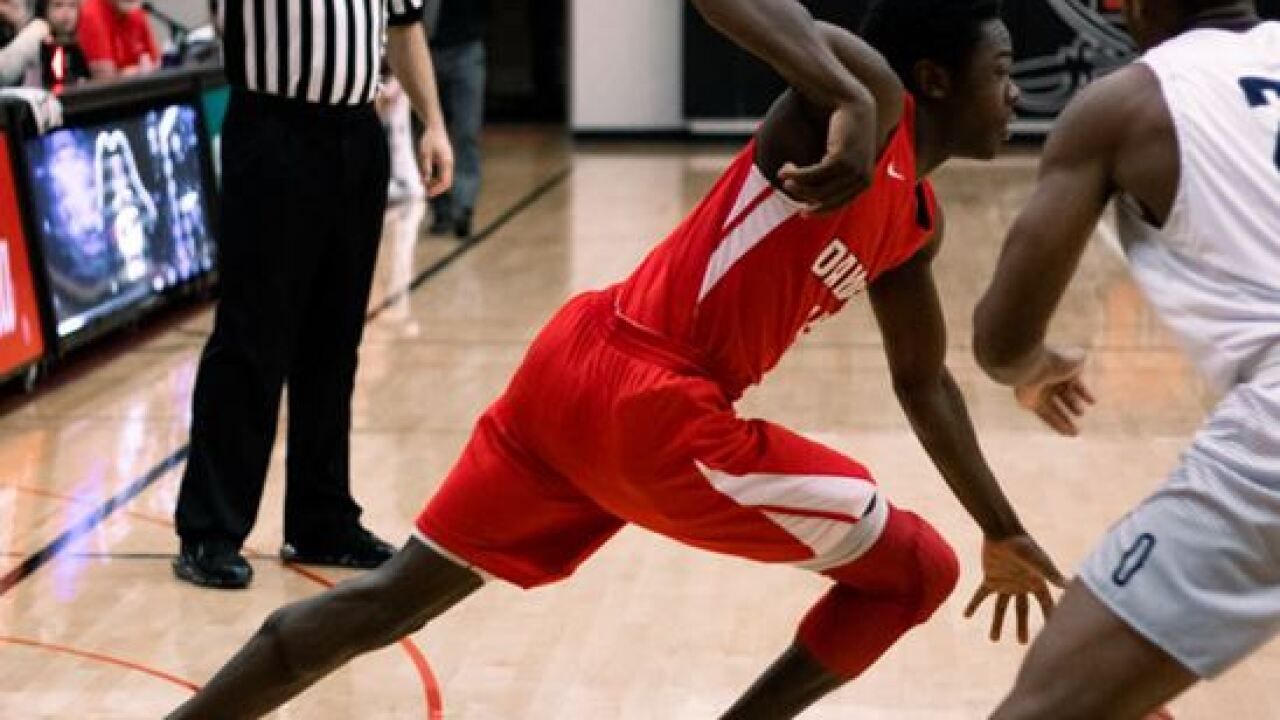 GLENDIVE - The Dawson Community College basketball men stayed perfect in conference play with a 94-81 win over Bismarck State College on Barefoot Coaching Night in Glendive. Dawson Coach Joe Peterson and his assistants went barefoot for this game to raise awareness of the millions of people worldwide who don't have proper footwear. The win moves Dawson to 19-6 on the year and 8-0 in conference play with a match-up vs. 7-1 North Dakota State College of Science coming on Wednesday night in Glendive.

The opening nine minutes was back and forth with no team getting a lead of more than 3 points before Kolten Hitt nailed back to back 3-pointers on assists from Man Man Baker to put Dawson up 24-15. Jamison Kramer responded with a 3-pointer of his own and then Kyler McGillis followed up with another one from long range to pull Bismarck within 3 points again. Dawson again built the lead back up to between 6-10 points for the next stretch and then closed out the half with a mini 9-2 run in the final two minutes to go into the locker room with a healthy cushion.

It was a similar story in the second half. The Bucs had a 10 point lead with 8:52 remaining and scored ten in a row over the next 1:40 on a 3-pointer from Kell Schwers, a dunk by Charles Lampten, a 3-pointer from Camron Dunfee and two free throws by Beau Santistevan. The closest Bismarck came after that was the final margin 94-81.

Bismarck outshot Dawson in every facet including 51% for the game, 46% from the 3 point line and 85% from the free throw line, but Dawson dominated the boards 44-36 and forced Bismarck into 26 turnovers, scoring 33 points off those turnovers. Dawson slowly built a 15 point half-time lead 53-38 and even though Bismarck outscored them in the second half 43-41, it wasn't enough to overcome the big deficit.

Eleven different players scored for Dawson and four were in double figures led by Man Man Baker's 15 points on 6 of 9 shooting to go along with 6 rebounds and 6 assists. Kolten Hitt added 14 points, also shooting 6-9 from the field. Hitt also contributed 5 rebounds and 5 steals. Kell Schwer's 11 points and Beau Santistevan's 10 points rounded out the double figure scorers.

Bismarck State was led by Kyler McGillis who had 20 points and Jamison Kramer's 18 points.

Coach Joe Peterson said, "This was the second straight game we've allowed our opponents to shoot a good percentage. They hit some tough shots, but we have to be better in our half-court defense to not allow them to get anything easy. Fortunately our pressure created enough turnovers and we did a good job on the boards to offset their good shooting."

What appeared to be a close women's game in the first half grew to a sizable difference in the second half. Bismarck State College ran away in the fourth quarter (30-16) to defeat DCC 84-66.

The Lady Bucs won two out of the four quarters, had 15 steals and caused 26 turnovers; however, the Lady Mystics outrebounded Dawson by a large margin of 54-34. There were 7 lead changes and 4 ties in the back and forth game.

Coach Romeo Lagmay, Jr. shared his disappointing thoughts, "It was a great game in the first half. Our assistant coach Paige Wright did a very good job scouting Bismarck, but our team couldn't rebound or score. Shooting 5-36 from the 3-point range and getting outrebounded by 20 will get us nowhere. We need more scorers besides Ashley and Ashya. It really disappointed me today because we usually fight hard, but parts of our team gave up mentally. We just have to keep pushing forward and hope things go our way against the upper echelon of the conference."

Ashley Orozco scored a team high of 24 points, along with 5 assists and 4 steals. Ashya Klopfenstein had 15 points, 9 rebounds and 5 steals. Tamiya Francis chipped in with 11 points, 3 assists and 2 steals.

Dawson will be home again to face off against North Dakota State College of Science on Wednesday at 5:30 pm.