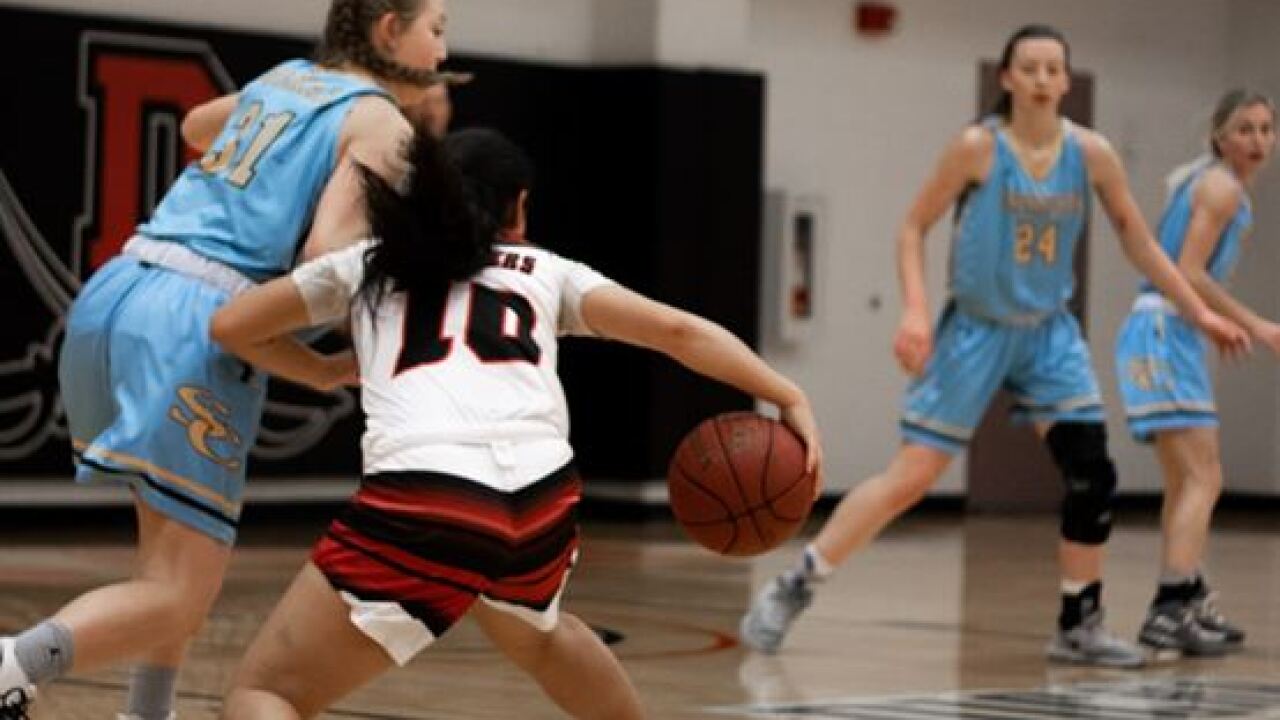 GLENDIVE - With only 7-8 players suiting up and having three consecutive games this past weekend, the Dawson Community College Women's Basketball team still managed to win two of the three games played. The Lady Bucs defeated Rocky Mountain College JV on the first night 77-39, lost to Gillette 78-47, and beat the University of Jamestown JV 56-48.

During the Rocky Mountain JV game, DCC outscored the Lady Bears in every quarter but the fourth. The Lady Bucs came out on fire and won the first quarter 23-4, and continued the same dominance in the third quarter 28-7. Dawson outscored Rocky JV 16-6 on second chance points, 20-11 from the bench, and 28-15 from turnovers.

The next day went totally awry for the Lady Bucs, as they got pummeled by the Lady Pronghorns of Gillette College 78-47. Dawson only had 7 players dressed, yet still came out on fire in the first half, competing wholeheartedly and ended the first quarter only down 6. However, Gillette would not let Dawson within reach the rest of the game by shooting 53% from the field and outrebounding the Lady Bucs 48-36. The Lady Pronghorns converted 16 second chance points to Dawson's 6. Both teams were similar in turnovers as Gillette had 19 and Dawson 18. On a positive note, Dawson shot better from the foul line at 71%, where they have been struggling the last several games. They also had more steals than Gillette; 10 compared to their 6. DCC has also been struggling from the 3-point line and shot only 13% for the game.

Tamiya Francis was the only Lady Buccaneer in double digit scoring with 11 points, along with 5 rebounds, 5 assists and 4 steals while playing all 40 minutes.

The Lady Bucs were able to bounce back and win the next day against the Lady Jimmies of the University of Jamestown. However, Jamestown would put up a great fight, and would outscore the Lady Bucs 20-8 in the third quarter. The Lady Jimmies found themselves up 9 points in the fourth quarter, but Dawson kept their composure and eventually outscored Jamestown JV 21-6 in the fourth. The Lady Bucs minimized their 3 point shooting and attacked the basket more. They scored 26 points off turnovers and had 13 steals. DCC outrebounded Jamestown JV 51-42.

Megan Lindbo had a game high and career high of 19 points, to go along with 11 rebounds, while shooting perfect from the 3-point line (1-1) and free throw line (4-4). This was her first double double of the season. Lindbo also had 3 assists. Haley Olson chipped in with 10 points, 8 rebounds, 3 assists and 2 steals. Ashya Klopfenstein had a game high of 12 rebounds, along with 8 points and 5 steals.

Coach Romeo Lagmay, Jr. commented on the tournament, "It can be really draining on a squad short of players to play 3 consecutive days; but our team showed their effort, stayed the course, and proved why conditioning is important throughout the season. I was glad to see some players step up, while others were not playing. As mentioned before, once we establish a chemistry between teammates, players and coaches, this team will be more successful in their competition. Having 9 freshmen and only 1 sophomore, there is still lots of learning to do early in the season so we can be prepared for conference play."