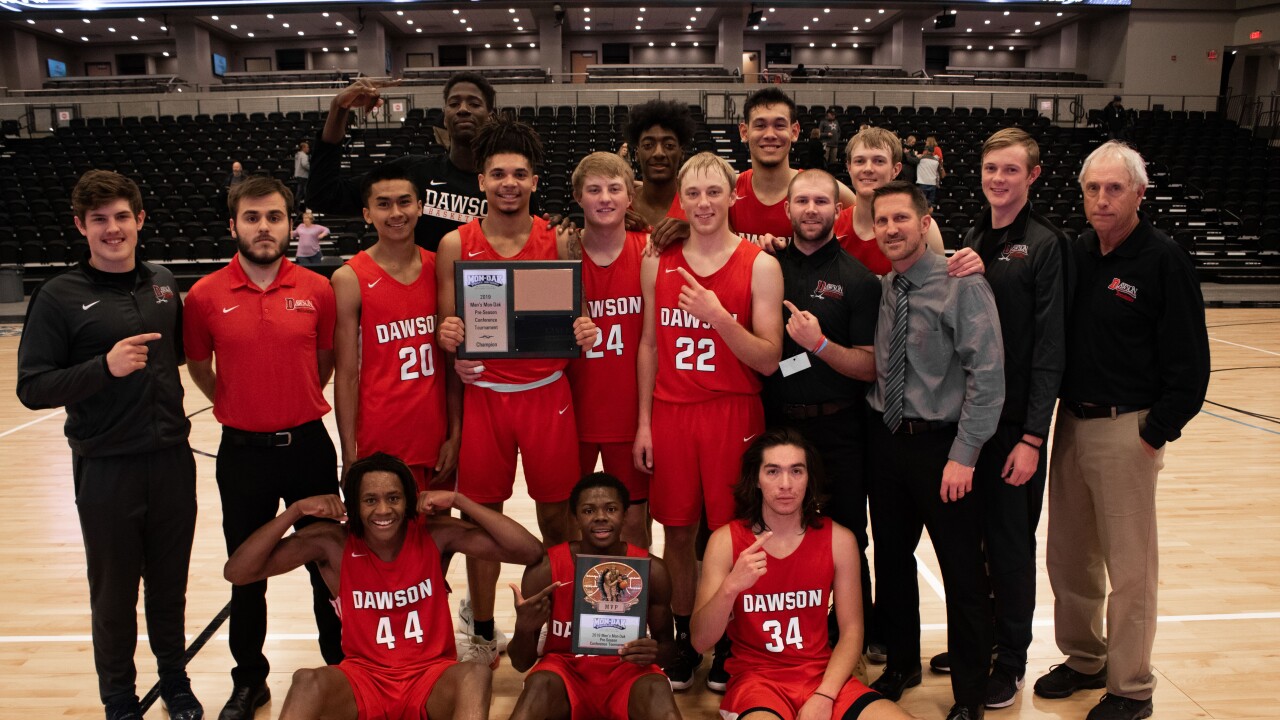 The Championship game followed a similar pattern as the previous two games for the Bucs. Once again they jumped out to an early lead and led throughout, but allowed the Tetons to climb back in during the second half. For the third straight game, Dawson closed out the game in the final five minutes.

In the first half, Dawson forced 15 turnovers and held the Tetons to 28% shooting from the field. The Bucs had the lead for most of the half until Williston fought back to take the lead with 6:04 remaining. Dawson outscored them by 12 over the next four minutes to take a double digit lead with a minute left before Kobey Lam nailed a 3-pointer to bring Williston within 8 points at halftime, 39-31. WSC only connected seven field goals in the first half, but stayed close by going 15-18 from the free throw line.

The second half followed a similar story line as the first half with Dawson leading all of the way. Williston got close a couple of times, but couldn’t ever get over the hump to take the lead. Dawson’s biggest lead was 14 points with eight minutes remaining.

Man Man Baker led five guys in double figures with 16 points to go along with 7 rebounds and 3 steals. Baker was named Tournament MVP by averaging 16 ppg, 7 rpg and 4 spg while shooting 54% from the field.

Devin Collins played big in the championship with 15 points and 6 rebounds. CJ Nelson and Camron Dunfee had 14 points each and Jaron Masis added muscle inside with 11 points on 4-5 shooting. Dunfee led the team in rebounding with 8. Williston was led by Lam’s 24 points and Jonathan Komagum had 20 points and 15 rebounds.

"These guys showed a lot of character this weekend by beating three good teams," said Dawson coach Joe Peterson. "Out of the 120 minutes we played, we led for 115 of those minutes. Each time the other team would take the lead, we would come right back with a big shot to regain control. They never panicked and kept trusting each other. With all of our returners this year, we should be ahead of our competition right now. This is a good starting point for us, but there’s a lot of room for improvement. We need to learn to rotate quicker and get in the right position without fouling and, offensively, we need to make better decisions and execute better. This was a good moment for our program, but we can’t be satisfied if we want even better moments ahead!”

The Bucs will play in their home opener on Friday night at 7:30 pm vs. Northwest College and then again Saturday at 4:00 pm vs. Sheridan College.