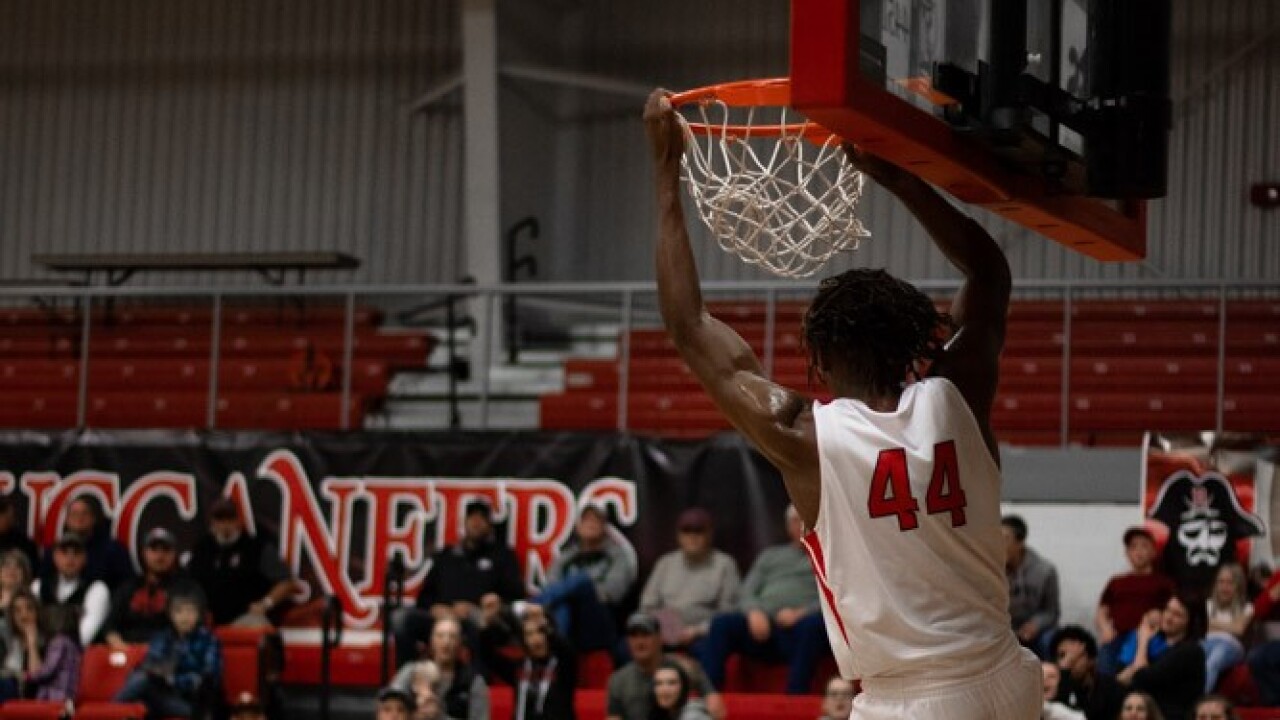 GLENDIVE - The Dawson Community College Buccaneers got off to a rocky start, but fought back to overwhelm the visitors from Northwest College in the second half, securing a 94-67 win in their home opener.

Early on it was all Northwest College. They opened the scoring with a 3-pointer from Alan Swenson. Beau Santistevan answered back with a strong move inside before the visiting Trappers went on a 14-4 run over the next seven minutes to take a commanding 17-6 lead midway through the first half. Dawson's shots weren't falling and they turned it over six times in that stretch. Northwest's biggest lead was a 13 point cushion at 25-12 with seven minutes remaining in the half.

The Bucs began their comeback on a dunk by Romeo Parker off a pass from Camron Dunfee. Parker followed it up with a couple of free throws. Dawson scored 23 points in the final five minutes of the half by using their pressure defense that forced several turnovers and helped them score 8 points in transition during that stretch. In the final minute, Kolten Hitt netted a 3-pointer on another assist from Dunfee to pull Dawson within one point. Man Man Baker tied it up with a free throw on the next possession and then stole a pass and Santistevan gave the Bucs their first lead with another bucket with 30 seconds left.

Even though they trailed the entire half, they managed to enter half-time with a 39-37 lead. Northwest College was able to force 13 turnovers in the first half and the Trappers went on to shoot 48.5% from the field in the first half, while Dawson shot 50.0%. Kyle Brown torched Dawson for 18 points in the half by shooting 9-13 from the field.

In the second half, Dawson picked up the intensity on the defensive end, and were able get off to a better start. Kolten Hitt made a three-pointer off a pass from Baker. Brown answered for Northwest with drive and score. Jaron Masis scored inside on the next possession for Dawson. Brown made a free throw and then followed it up with a 3-pointer. Seth Mason followed that up with another 3-pointer to give the Trappers the lead again.

The teams battled back and forth for the first five minutes of the second half, but with the game tied at 54, Roulervee Vann made a free throw and Charles Lampten scored inside off another assist from Dunfee. That catapulted Dawson to a 21-2 run over the next eight minutes that culminated with a beautiful spin move and finish on the break by Devin Collins. The closest Northwest would get after that was a 16 point deficit. The Bucs scored the last 8 points of the game to get the 27 point win. In the second half, Dawson held the Trappers of Northwest College to 29% shooting, while Dawson on the other hand went on to shoot an identical percentage as they did in the first half, 50%.

Dawson outrebounded the visitors 51-31 for the game and their bench outscored them 51-18. Northwest was led in scoring by Kyle Brown who went on to have 29pts on 13-21 from the field. Dawson had a typically balanced attack with everyone contributing. They were led by Beau Santistevan's 17 points and 7 rebounds. Collins came up with a double-double; 11 points and 11 rebounds. Dunfee finished with 12 points and 5 assists while Baker had 10 points, 6 assists, 3 steals and 2 blocked shots. Parker and Masis finished with 10 points each to put 6 Bucs in double figures. Eleven of their twelve players made it into the scoring column and also in the rebounding column. The win moves the Bucs record to 4-0 on the season.

Dawson will have a quick turnaround as they host Sheridan College Saturday. The women's game will start at 2:00 pm and the men's game afterwards at 4:00pm.