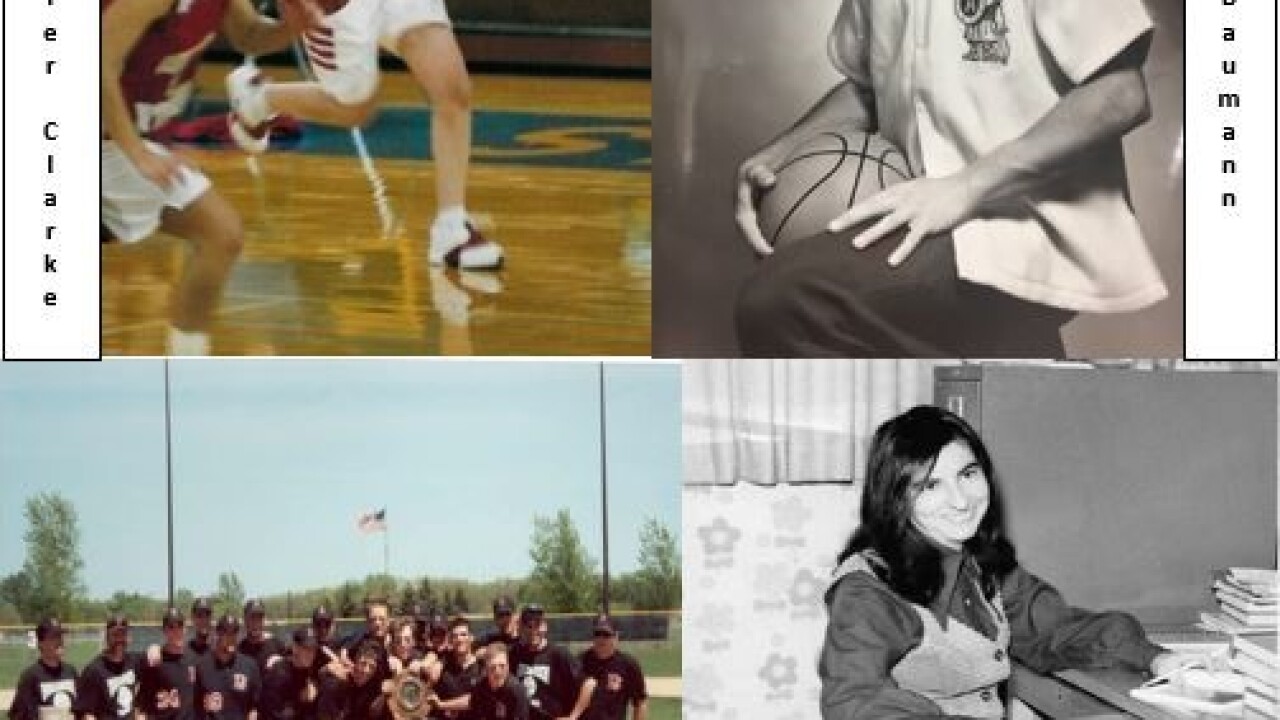 KTVQ Sports Director Scott Breen will be the Master of Ceremonies for the weekend. The Hall of Fame is a part of DCC's mission to foster a culture of excellence, and the College is excited to honor the individuals and teams who have achieved excellence in athletics over the past 60 years.

A committee of six members, made up of former DCC coaches, student-athletes, and current Board members, reviewed and deliberated over the nominations and came to the final consensus. DCC Athletic Director Joe Peterson praised the class of inductees. "This is an exceptional group with a dual sport athlete who holds many school records, our first All-American, a coach who was far ahead of her time, and a baseball team that reached the World Series."

Anyone interested in purchasing tickets for the Hall of Fame Banquet on the evening of January 18 can contact Erin Kaufman at 406-377-9405 or ekaufman@dawson.edu . Tickets are $25 each. A limited number are available.

For more information on the Dawson Community College Athletic Hall of Fame, contact Joe Peterson at 406-377-9459 or jpeterson@dawson.edu .

In softball, Kaila led her teams to the World Series both years, finishing 4th place in 2002 and 5th place in 2003. She was known for her ability to hit and her anticipation in the outfield. She was selected as an All-American and all All-Tournament team at the World Series in 2002. She also broke the school's hitting record at the time by hitting .473. After finishing at Dawson, Kaila attended Montana Tech University where she played basketball for two years.

Kaila currently works at Centene Corp as a Software Engineer. Kaila has 2 young boys ages 1 and 4, and her husband Brian Clarke is the Women's Soccer coach at University of Providence.

Gary Baumann
In 1967 basketball player Gary Baumann was the first ever NJCAA All-American from Dawson Community College. In that historic season he was the 13th leading scorer in the nation. The 6'0 guard scored 1120 points in his two-year career at Dawson, averaging 24.3 points per game. He had over 30 points 15 times in his career at DCC and scored over 40 points once. When he graduated, he held several records at Dawson including points in a game, field goals in a game, free throws in a game, free throws in a season, and scoring in a season. Baumann also set the conference scoring record in a single game at Lake Region State College. He was Mon-Dak All-Conference both years, and after a stellar sophomore year in 1966-1967, he was named All-Region XIII and then Honorable Mention All-American. Baumann led his team to a Region XIII Championship playing under the direction of Coach Bill Ryan. After Dawson, Baumann had 15 scholarship offers from 4-year colleges, but chose Augustana College in South Dakota where he averaged 19.6 points per game. He was All-Conference 1st team in 1968-1969 and then was a Mid-West College All-American his senior year. He was inducted into the Augustana College Hall of Fame in 1987.

Baumann served as a coach, athletic director, assistant principal, and principal for over 30 years in the school system. He retired 15 years ago and resides in Kohler, Wisconsin with his wife Jodi. Baumann has four grown children and two grandchildren.

Lois Steele
Lois Steele was hired by Don Kettner to start the Women's Basketball program at DCC in the spring of 1969. She served as instructor, Dean of Women, Director of Special Services, and as the Head Women's Basketball Coach. She was the groundbreaking force behind the beginning of the program and used her experience with AAU basketball to recruit players even though there weren't any athletic scholarships available to women, but only academic merit scholarships. DCC didn't have a gym, so they held practices at the high school late at night from 11:00 pm - 1:00 am. Since there wasn't a women's basketball conference set up, they had to play any school who had a program throughout Montana, North Dakota, Wyoming and Canada, including many four-year programs. She coached the team from 1970-1973 and had an overall record of 37-6 including an undefeated season in 1971-1972 and an 18-2 record in her final year.

Steele was a family practice doctor for over 30 years and currently does clinical research for Eclipse Clinical Research in Tucson, Arizona.