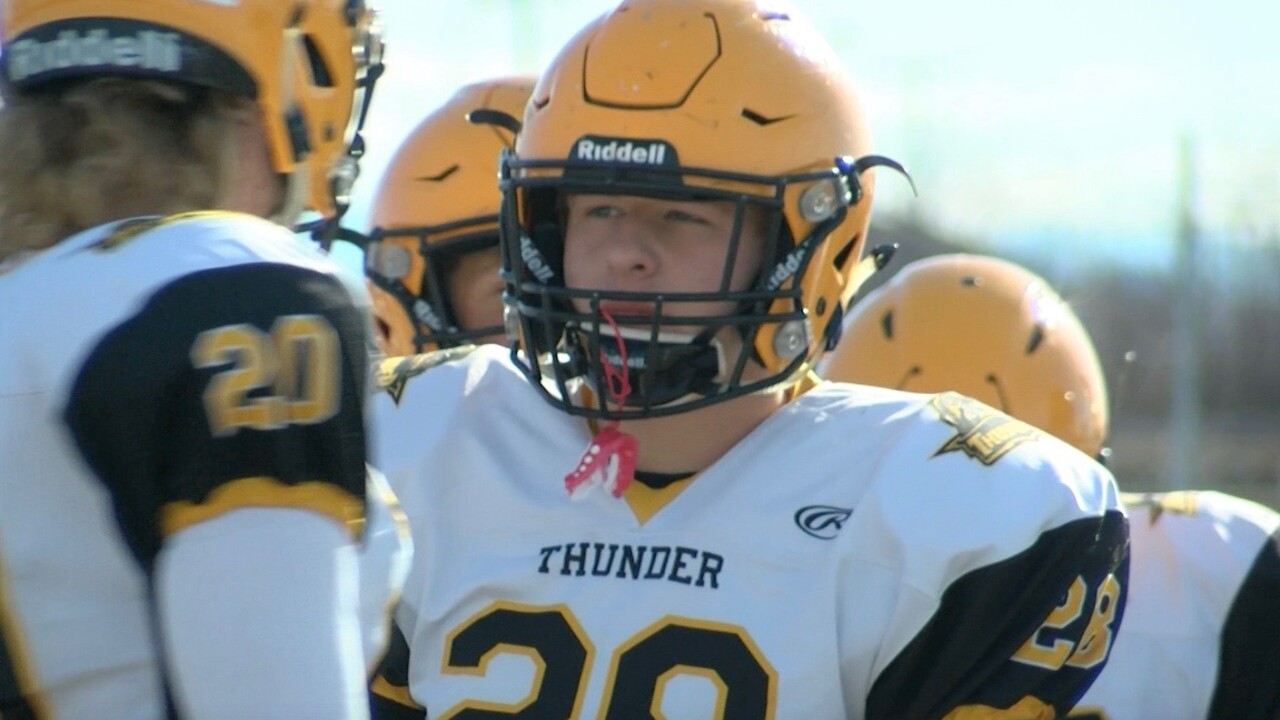 Westby-Grenora has been a bit of a Jekyll and Hyde team in 2019. The Thunder have a statement win over defending 6-Man state champion Wibaux, but the Thunder gave up a big halftime lead to Richey-Lambert early in the season and were trounced by Jordan in the final week of the regular season with the 6-Man East title on the line.

“When things are gelling, we’re working well, everything ultimately came down to us being consistent with blocking,” Johnson said. “If the kids aren’t up to the task of blocking, then you can call any play you want and it’s not going to work. We’ve kind of driven that home to our kids how important that is. … We’ve lost some games, no doubt about that. We’re not afraid to see that, the only thing we can do is improve.”

That loss to Jordan served as a wake-up call of sorts for the Thunder. After playing close for the first half of the game, the Mustangs ran away from the Thunder in the second half, sending Westby-Grenora on the road for the playoffs.

“That Jordan game kind of showed us just how fast and physical – Jordan is one of the fastest 6-Man teams I’ve ever seen. I’ve been coaching for eight years and I think that was one of the fastest teams,” Johnson said. “I think defensively we probably got, and I was the one making the checks on those, I think we got a little bit cute, for lack of a better word, on our similar defensive checks. In turn, when the kids aren’t 100 percent positive on their defensive checks, they start to play a little slow. That combined with Jordan’s speed is not a good matchup. … Kind of a wake-up call. Our kids had a goal to win a conference championship. At that point, that goal is done, we didn’t achieve it. We’ve just got to move on and take things one week at a time.”

The Thunder had no problem on the road in the opening round of the playoffs, traveling to North No. 2 seed Power-Dutton-Brady and handing the Titans a 50-0 beatdown. But now Westby-Grenora makes a trek even farther across the state – all the way to Hot Springs, a trip that the Thunder began on Thursday morning.

Westby-Grenora made a pit stop in Forsyth to get in practice on Thursday afternoon and will practice in Drummond on Friday before staying in Missoula Friday night. The Thunder will head to Hot Springs Saturday morning. Johnson has been quick to remind his athletes that this is a business trip.

“We made darn sure that (Thursday) was a working practice,” Johnson said. “Their brains can be a little bit conditioned, because we’re so used to traveling and whatnot. … We brought along cones, we took a lot of our supplies along with us and we actually had them go through drills (Thursday) to give them the idea that we’re working rather than just walking through.”

Westby-Grenora has been tasked with heading on the road throughout the remainder of the 6-Man playoffs, as long as the Thunder continue to win. But that hasn’t changed the mentality Johnson and his team are carrying into Hot Springs this weekend.

“Honestly, as our team and what we’ve always done, especially in the playoffs, we don’t think about next week and traveling,” Johnson said. “At this point we’re focused on Friday’s practice, making it the best practice that it can be. From there, we’re looking at the game. We’ve just got to win in practice, and the next day we wake up we’ll take it one day at a time.”

If Westby-Grenora is able to string consistent performances together and steal another victory on the road, the Thunder will travel again in the semifinals to either Shields Valley or Wibaux. Westby-Grenora and Hot Springs are set to kick at 1 p.m. on Saturday.