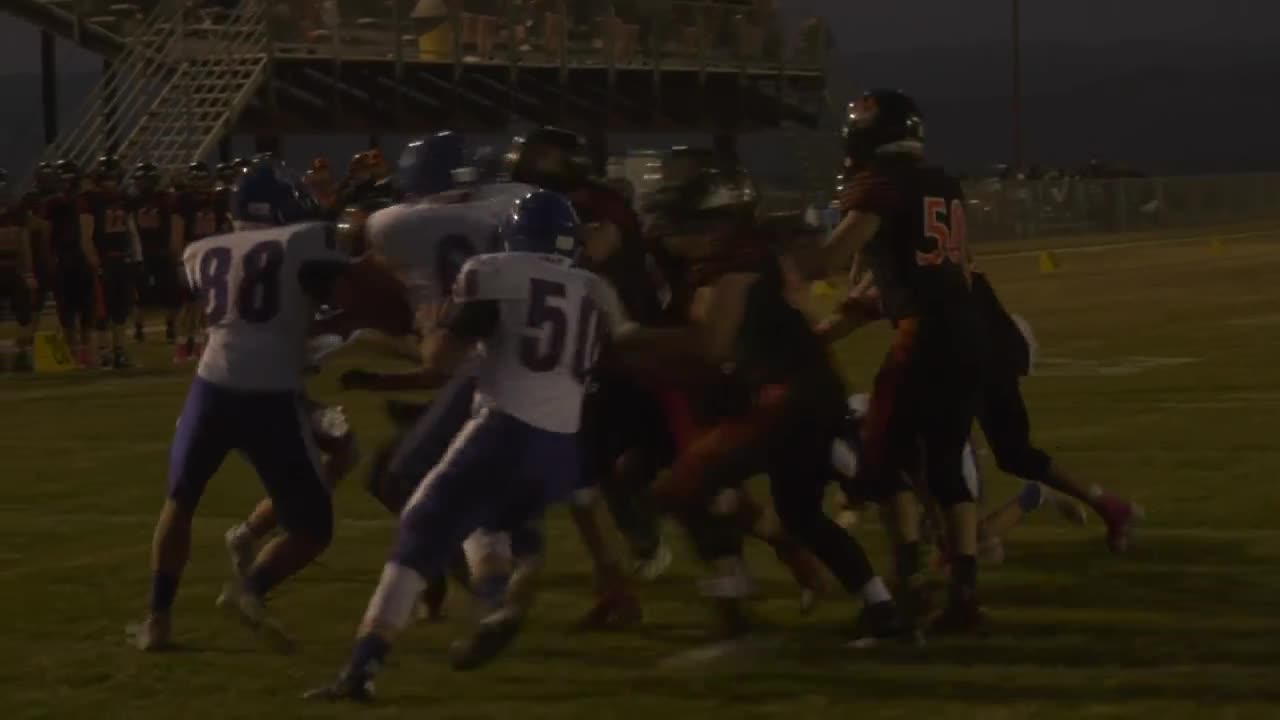 MANHATTAN — The Manhattan football team moved to 6-0 on Friday after dominating Big Timber 49-0, but the Tigers continue to blow out teams using both the air and ground attacks.

“We have a lot of weapons," said head coach Chris Grabowska. "(We) got some guys that can run the ball, guys that can catch the ball, got a quarterback who can do a little of both. It just comes down to, we’re just balanced offense. We’re willing to take what the defense gives us.”

Going into Friday night’s game, the two running backs, senior Toby Veltkamp and senior Isaac Richardson, were punishing opponents on the ground. Veltkamp was averaging a whopping 9.9 yards per carry on 31 attempts and Richardson was averaging 6.2 on 58 rushes.

“It’s insane, Isaac and Toby -- they’re both great running backs," said senior quarterback Caden Holgate. "They run hard. Every time they get the ball, they never take a play off and our line fights for them. When you have guys like that that are constantly working their butts off, it makes other people want to fight for them, block and open up holes.”

Both running backs play differently, balancing each other out. Veltkamp brings the tenacity and makes defenders pay when they come to tackle him.

His coach and quarterback didn't mince words about his punishing running style.

“Toby, he’s just a brute of a player," said Grabowska. "He kind of runs the ball like he plays defense, he’s always looking to hit, get that contact. He’s hard to bring down, so he does a great job for us.”

“A little bit of craziness," Holgate said of what Veltkamp brings to the team. "He does it all and he runs hard every time he gets the ball. He’s looking to take someone’s head off and you see that when he gets it.”

Richardson has the speed and vision.

“He’s elusive, fast and he hardly ever gets taken down on first contact," said Grabowska. "I think that’s a big reason he’s averaging 6 yards a carry and just seeing the hole well and he runs hard.”

“He’s got elusiveness," said Holgate. "He finds holes and he goes, he makes moves and he just gets up field. He’s a great runner.”

The running back tandem doesn’t mind one bit that they share carries.

Manhattan just doesn’t get it done on the ground, though. Holgate was completing 71 percent of his passes with 12 touchdowns and only one interception going into Friday night's game. He also averages more than 5 yards per carry on the year.

“Caden’s a playmaker, he’s a gamer, he always has been and we knew that going into the season," Grabowska said. "It’s great that if something’s not there, he can scramble a little bit instead of throwing the ball away, just get us some positive yards on the play. That’s a great threat to have as well.”

But none of this could happen without the big guys up front.

“We have an amazing (offensive) line and they work their butts off every single play," said Veltkamp. "They come to work and we really appreciate it. They take care of us.”

Next week this offense will have to stay hot as the Southern B regular-season championship is on the line as the Tigers take on Townsend.

“Townsend’s a great team, they’re well-coached, they got some good athletes on their team," Grabowska said. "We’re going to have to have a great week of preparation. I told the kids, enjoy this win, it’s Homecoming, go celebrate a little bit and then Monday we have to work hard because it is a big week for us. We’ll be ready.”