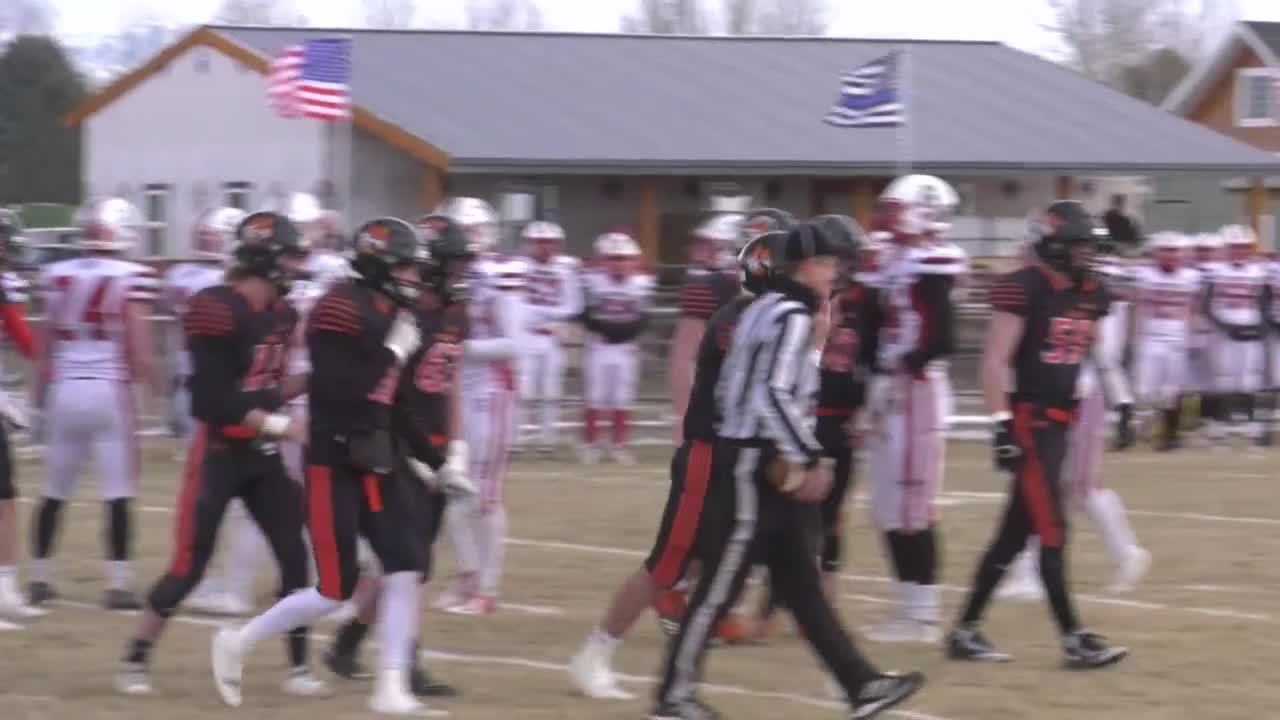 MANHATTAN — On Saturday in the Class B state football playoffs, the No. 1-seeded Manhattan Tigers took on the No. 3 seed Glasgow Scotties in the semifinals, with the home team earning a convincing win, 43-18. The Tigers will advance to the Class B championship in Fairfield next weekend.

Glasgow would get the ball first, but the Manhattan defense, which has shut out its last two playoff opponents, came to play, forcing the Scotties to go three-and-out.

Manhattan star quarterback Caden Holgate would reward his defense with a touchdown, as he dumped off a short pass to Tate Bowler, and nice block would open a hole for him to take it 70 yards to the house. Manhattan went up 8-0 after the two-point conversion.

“He’s quick," Holgate said of Bowler. "He’s got speed, and plays where you think it’s just a 5-yard gain, he’ll turn it into a huge touchdown.”

“He’s got a chance to take it home and (Saturday) he did," said Tigers head coach Chris Grabowska. "(Bowler) had a big play and he kind of set the tone for us (Saturday).”

Near the end of the first quarter, Toby Veltkamp punched one in from 4 yards out to put Manhattan up 16-0.

After a great kick return by the Scotties that put them in the red zone, their quarterback, Logan Idler, rushed it to pay dirt as Glasgow cut the deficit to 16-6.

A little more than a minute into the second quarter, Manhattan had the ball back in the red zone. Holgate escaped a sack, broke free into the open field and displayed shades of John Elway as he dove into the end zone, and Manhattan was pulling away 22-6.

The Tigers gave Holgate a lot more rushing attempts than normal, a weapon they haven’t used before, something they were saving for the playoffs.

“Glasgow is a great team. They were able to stop our run a little bit and we had that extra dimension with Caden to run the ball, and that was nice," Grabowska said.

Two minutes later, Holgate bombed it to Corban Johnson in stride for a 73-yard touchdown to put Manhattan up 29-6. The Scotties added six more to trail 29-12 at halftime.

In the third quarter, Holgate took a quarterback keeper and carried multiple Glasgow defenders down to the 1-yard-line. He would punch it in on the next play to give Manhattan a 36-12 lead. The Scotties scored on a 25-yard touchdown pass to slice into the lead, 36-18, but Manhattan would go on to win by the final of 43-18.

“I think the biggest key is preparation," Grabowska said. "We had a great couple of weeks of practice, and you go into the game knowing what we have to do and our kids go into the game and execute.”

Manhattan will travel to Fairfield next week for the state championship. The Eagles defeated Florence 8-6 on a late defensive stand that sealed the victory.

“Fairfield is a great program," Grabowska said. "They have a history of winning. We have to be ready, they have a great defense. They like to run the ball a lot and we just have to be ready to be able to stop the run again and hopefully our offense, we’ll come up with a great offensive game plan and see what we can do.”