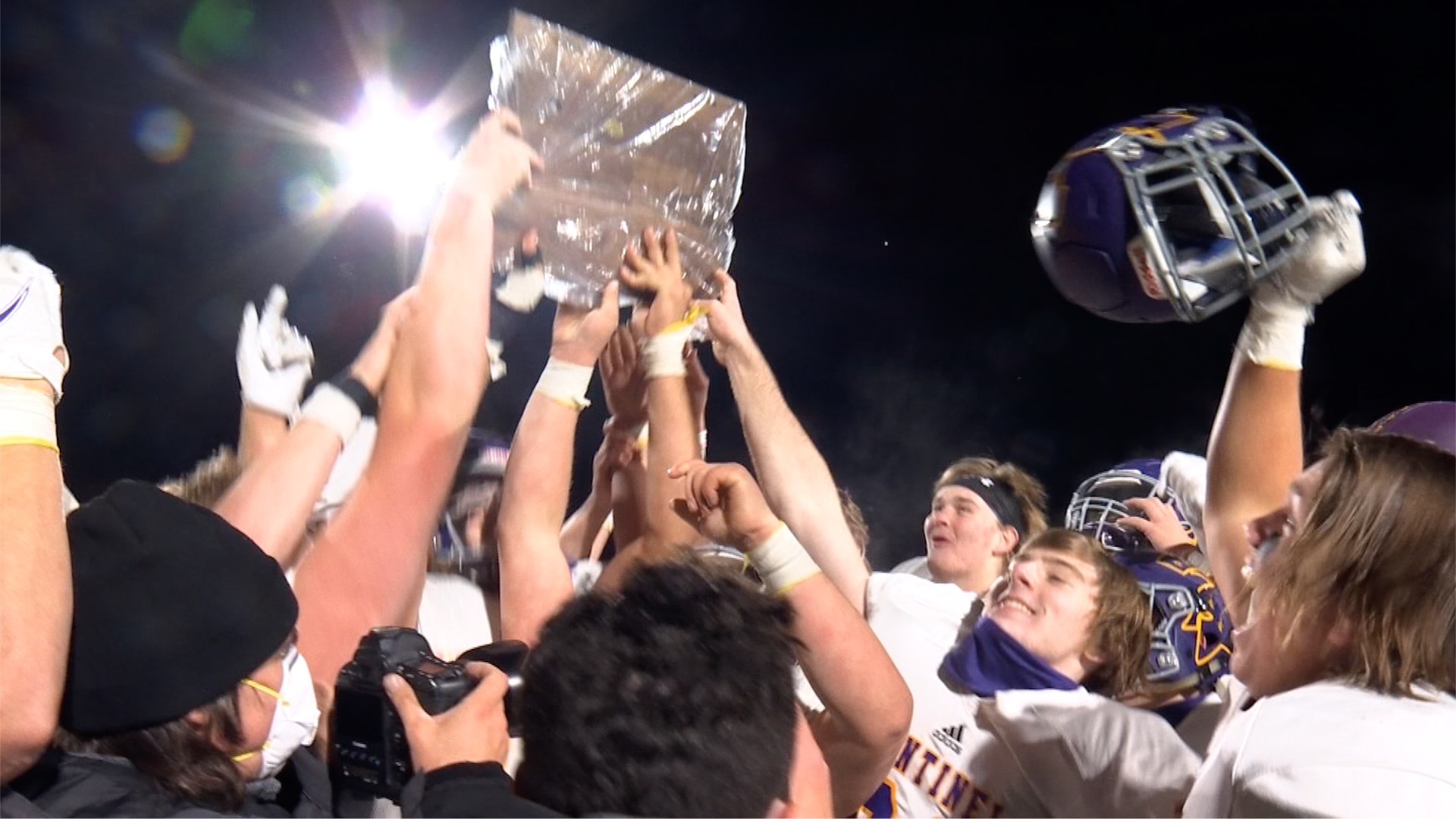 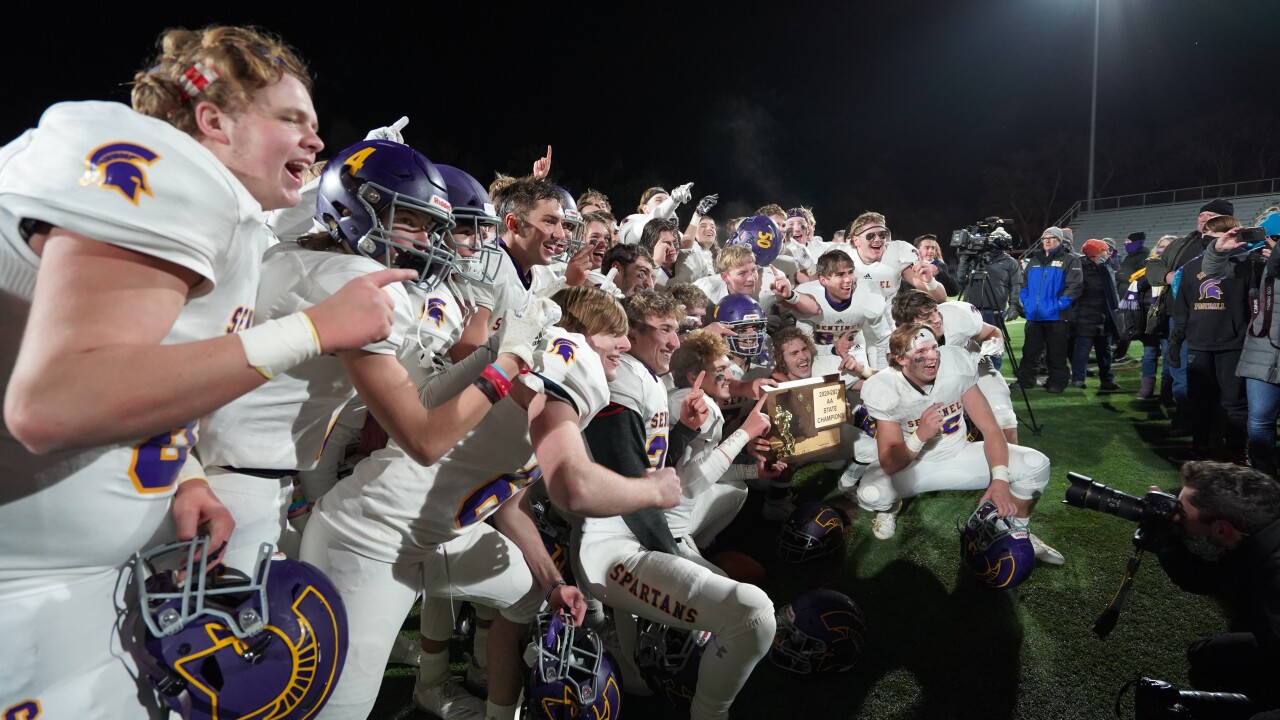 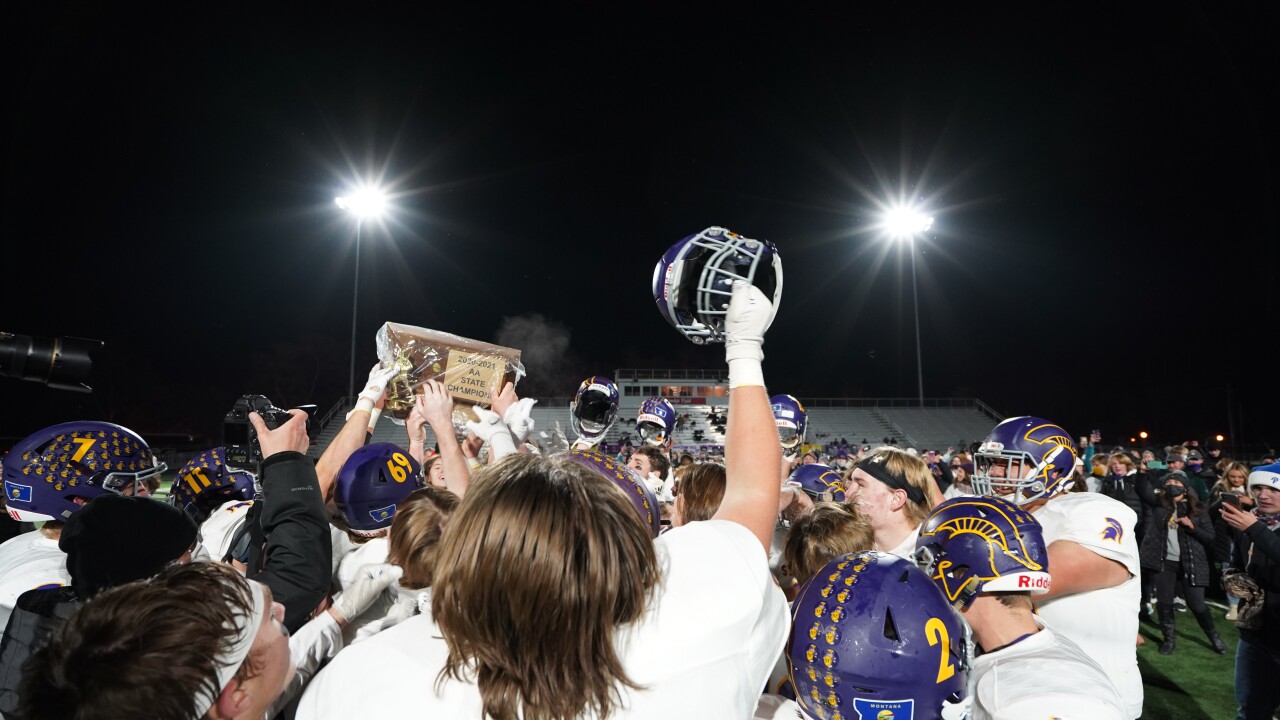 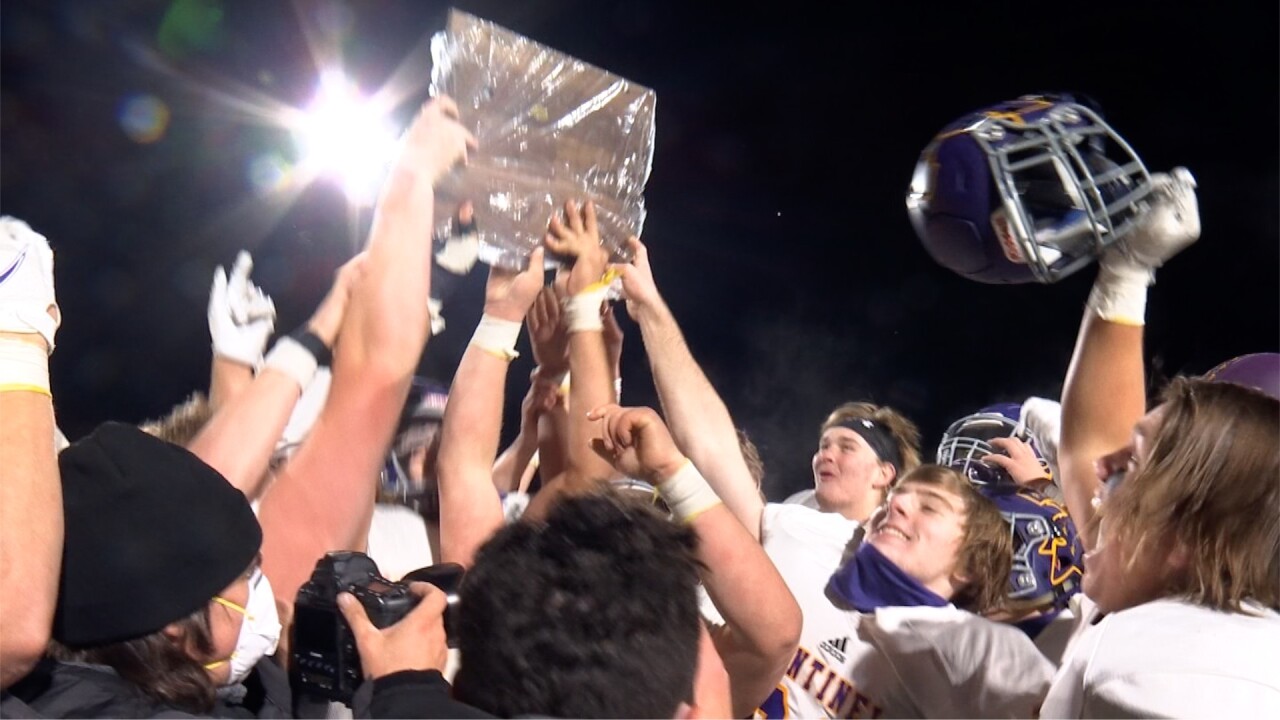 Klucewich, the former Frenchtown standout, intercepted West quarterback Isaiah Claunch first in the end zone on a promising West drive, then skied for a second interception inside three minutes remaining to seal the victory for Sentinel, its first state football championship since 1972.

"These kids, it's not their fault we hadn't won a state championship in 48 years. There was plenty of noise. We wanted them to just play for this team," Sentinel head coach Dane Oliver said. "It's good for the city of Missoula. ... This is not for this team. This is for every guy that's been in this program helping us lay the foundation. They helped us get to this point and these kids finished it off."

"We're just so grateful for this experience during this pandemic, being able to play, just coming together as a team and getting the job done. West is a great team and greatly coached. They put up a great fight (Friday)," Sentinel quarterback Dayton Bay said. "We play three phases of football -- offense, defense, special teams. We call it 'we-fense.'"

The Spartans finish the 2020 season with a perfect 10-0 record, while West ends its campaign 9-1.

West and Sentinel started the championship game off with a bang. After forcing a Sentinel punt, the Golden Bears dove into their bag of tricks for a double pass. Caden Dowler wound up finding Riley Bergeson by himself to set West up in the red zone.

Then it was Taco time. Taco Dowler hauled in a 20-yard touchdown, reaching over his left shoulder and sliding to the the turf with the defender draped on him to put West up 6-0 early after the missed point-after try.

After trading punts, Sentinel answered with its own impressive touchdown grab. TJ Rausch went up over the top of Dowler to haul in a 19-yard score from Dayton Bay to put the Spartans up 7-6. A 32-yard field goal by West's Spencer Berger gave the Bears a 9-7 lead just before the end of the opening quarter.

Again Sentinel had a quick answer. Off a play-fake, Bay hit Zac Crews for a 7-yard touchdown, giving Sentinel a 14-9 advantage.

West turned to running back Jaymn Medlock, who racked up yards through the teeth of the Sentinel defense, eventually setting up a 23-yard field goal by Berger to cut the deficit to 14-12 with 4:16 to play in the half.

West was gashing the Sentinel defense up the middle throughout the night but couldn't string plays together in the red zone to finish drives off.

"They were taking away Taco (Dowler) and Neil (Daily), so that opened up the lanes for Jaymn (Medlock) and Michael (DeLeon)," West coach Rob Stanton said of the Bears' running game. "We get a couple touchdowns instead of field goals, who knows what happens. ... We just missed on a couple opportunities, and that's the way it goes. Take the good with the bad."

Sentinel looked poised to add points to the scoreboard before the end of the half, but Camden Sirmon was picked off by Bergeson, sending the game into halftime at 14-12.

"A couple times we got in the red zone, we got field goals instead of touchdowns. Against a really good team in Sentinel it comes back to haunt us. I'm very proud of our kids. We battled a really good team. A couple plays here and there, it's a different story, but it wasn't. Credit to Sentinel High and congratulations to them," Stanton said. "Dane (Oliver) is a great guy. It's his first championship and the first one for Sentinel in many years, so I'm just happy for him. Obviously we're disappointed. We've got some work to do, and hopefully next year we'll come back and be strong."

West opened the second half with the ball and opted for a fake punt on fourth down, but Sentinel wasn't fooled by the play, and the Spartans took over on downs at their own 34-yard line. After a Crews catch-and-run put Sentinel in the red zone, Camdin Dirnberger connected on a 22-yard field goal to extend the lead to 17-12 with 3:55 remaining in the third.

After driving downfield on its ensuing possession, West faced another fourth down, a fourth-and-1 situation from inside the Sentinel 10-yard line, but coach Rob Stanton elected to kick the 23-yard field goal, which Berger knocked through to trim the lead to 17-15. That score held into the fourth, though a 67-yard kick return from Donovan South left Sentinel with short yardage, and Bay found Crews on an 8-yard touchdown pass early in the fourth to give the Spartans a 24-15 lead. It was Crews' second acrobatic scoring grab of the night.

"You always love a big target that can go up and get the ball. It doesn't get any better than that. Seeing the smile on his face -- he broke a tooth and snapped it in half," Bay said of Crews.

"We talked about a big kickoff return. We haven't had a lot of those this year just because we haven't had a lot of opportunities. I just think back to how we've been practicing those basic fundamentals. I thought we just needed to get back to blocking and tackling," Oliver said. "We were anxious. We were excited. We were trying to make up for 48 years and we just needed to play Spartan football."

West had another promising drive, but Claunch was intercepted by Klucewich in the end zone while looking for Neil Daily. The Golden Bears' defense held on a fourth down after a deflection by Caden Dowler, though, to give the home team life, trailing by two scores with 3:28 to play.

Bay completed 9 of 12 passes for 136 yards and finished with three touchdown passes -- two to Crews and one to Rausch. Sirmon, meanwhile, was 8 for 16 for 110 yards and one interception and added 52 yards on the ground. Crews finished with five catches for 73 yards, while Rausch tallied four receptions for 64 yards and Klucewich hauled in five passes for 61 yards.

Claunch completed 12 of 21 passes for 106 yards and two interceptions. Medlock finished with 130 yards on 17 carries, while Taco Dowler ended up with six catches for 53 yards and had the only touchdown for West. Bergeson finished with three catches for 49 yards. Sentinel finished with 355 total yards to West's 341.

Sentinel and West are scheduled to play the opening weekend of the 2021 season.