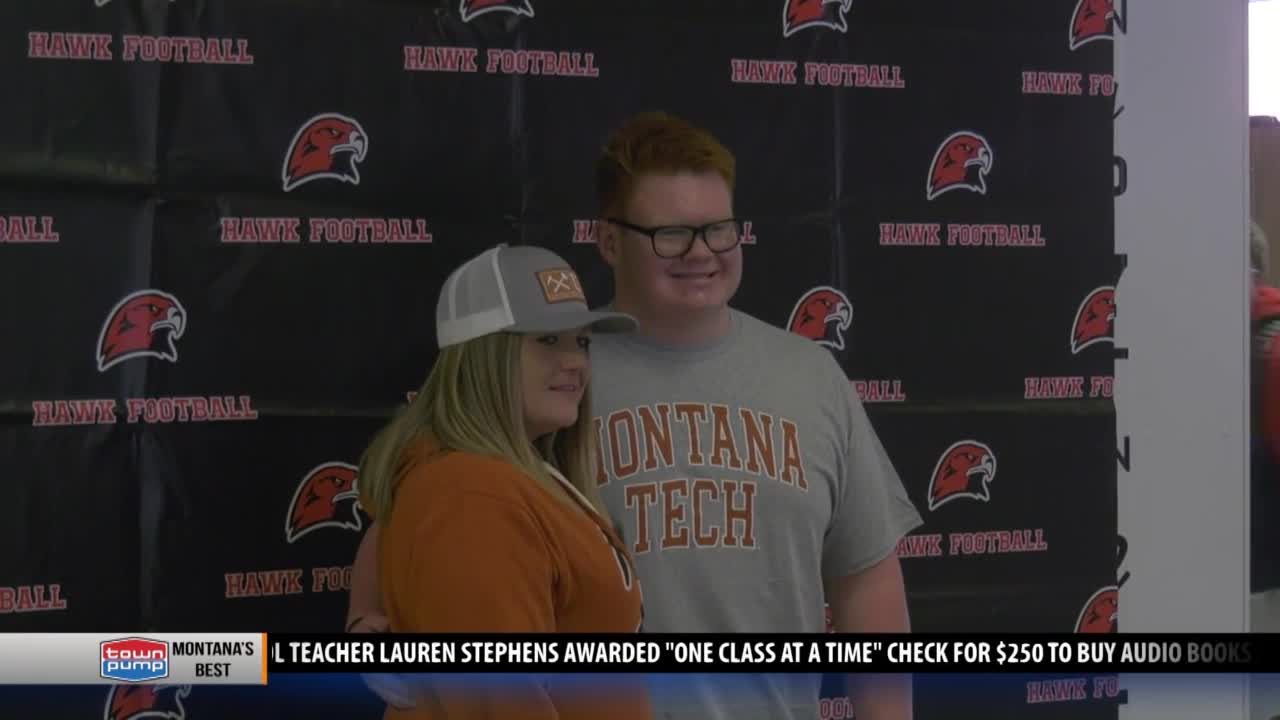 BOZEMAN -- Four Bozeman Hawk football players have taken advantage of the early signing period to National Signing Day, penning their national letters of intent to play at the collegiate level. Senior quarterback Jack D'Agostino and running back McCade O'Reilly are heading to Montana State. Meanwhile, tailback Asher Croy committed to the University of Montana and lineman Tom Walkup is headed to Montana Tech.

There is a bit of legacy heading to Montana State. O'Reilly's brother, Callahan, also plays for the Cats, while D'Agostino has been a name associated with blue and gold for a while. Jake's brother, John, played for Montana State, as did his father, Mark. And that played a role in recruitment.

"My brother is there and I want to play with him," said McCade O'Reilly. "(Callahan) didn't force me to do anything, he didn't really influence me to go there besides just him being there was big to me. He kind of informed me of what it's like up there."

When McCade O'Reilly went down with a season-ending surgery, Jake D'Agostino stepped up to lead the Hawks to a state title. That was the moment MSU coach Jeff Choate knew he wanted him to stay in Bozeman.

"If you don't have the quarterback that is going to be the leader, you're not winning that state championship. And I wanted Jake here because I knew the kind of guy he was. And whether he ends up playing quarterback for us or like, McCade's brother, moving to another position and being a starter for us, he's going to be a great Bobcat," Choate said.

Croy is separating from the pack and heading to rival Montana. But the breakout Bozeman star, who played one season with the Hawks after transferring from Huntley Project, is all-in with the Griz.

"I just really like the culture up in Missoula. I love coach (Bobby Hauck) and really bought in to what they're doing with the whole 'Return to Dominance' thing. I feel like that's a team that can win a lot of Big Sky championships and national championships," Croy said.

Walkup has been a quiet constant for Bozeman. He's the only Hawk on this year's team to receive four varsity football letters throughout his career. Walkup announced his commitment to the Orediggers on Monday and knew that Tech was the perfect fit.

"It's just a dream of mine to continue my career and play college football," said Walkup. "In the beginning, (Montana Tech) wasn't really at the top of my list. But a few weeks ago I went for an official visit, I got to know all the coaches up there and I feel like it's a home for me."

The early signing period is a 72-hour window where high school football athletes can sign their national letters of intent before it closes. The next opportunity will be the official and final National Signing Day on Feb. 5.