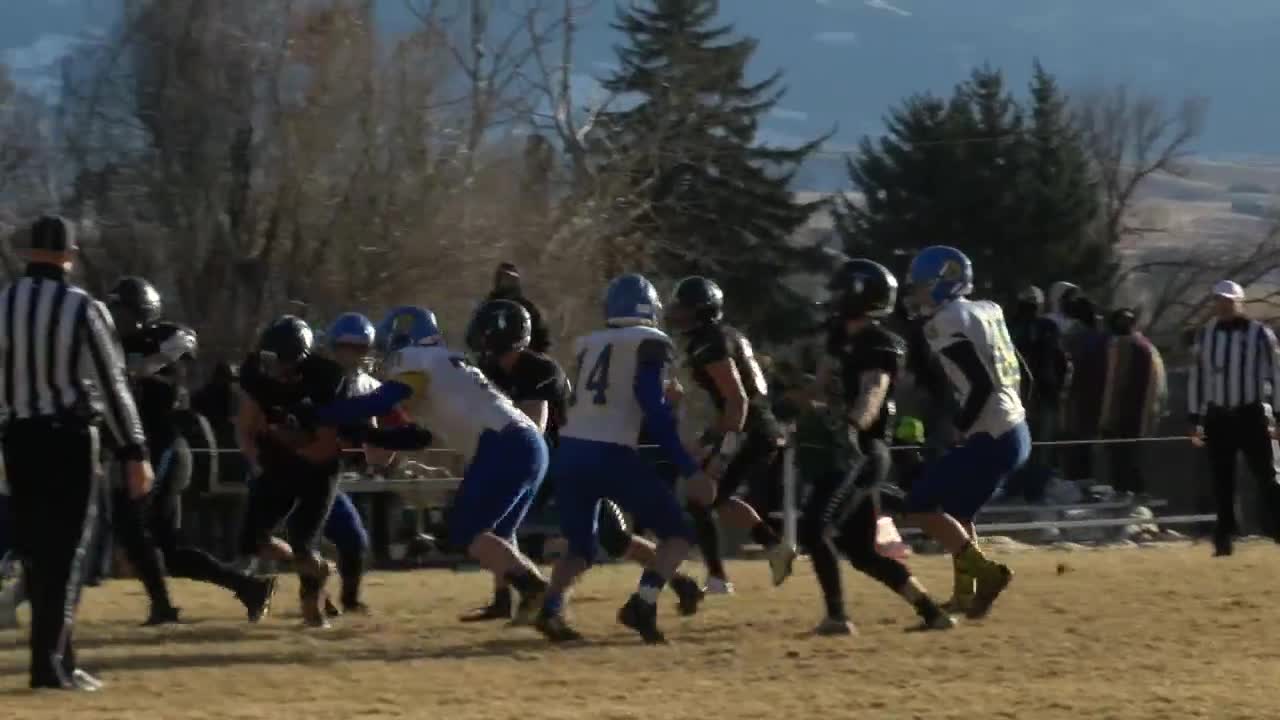 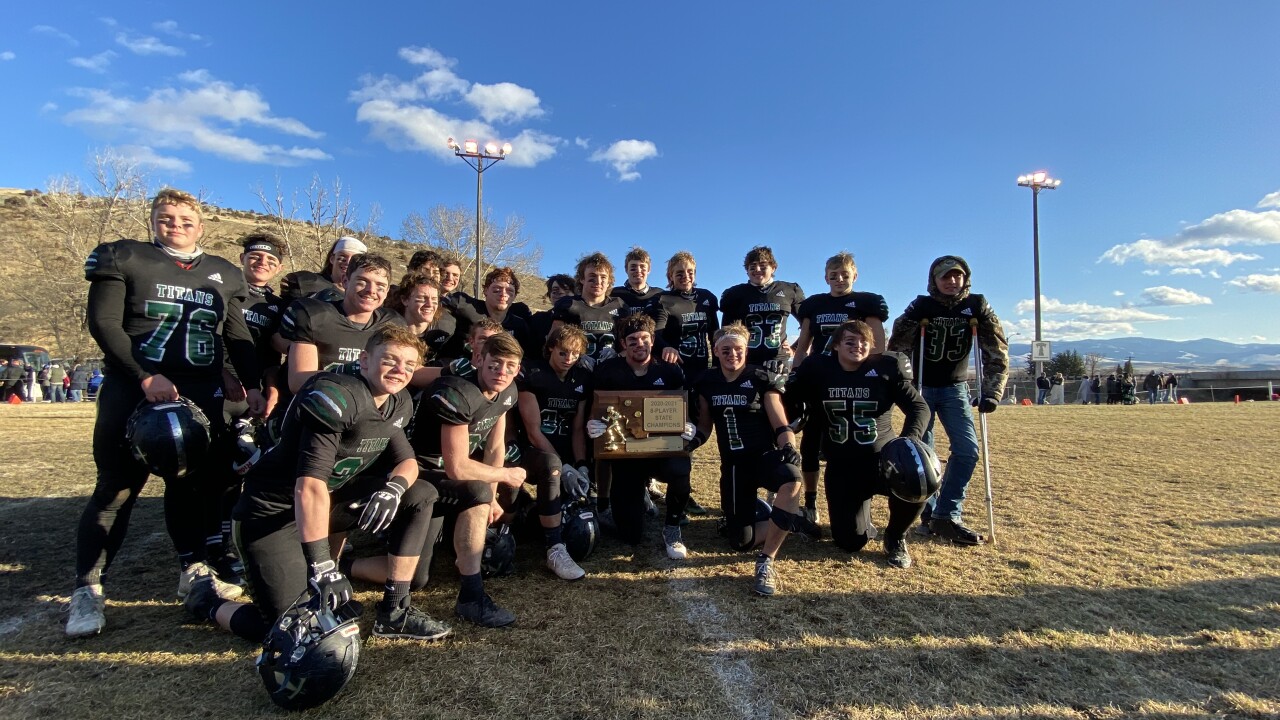 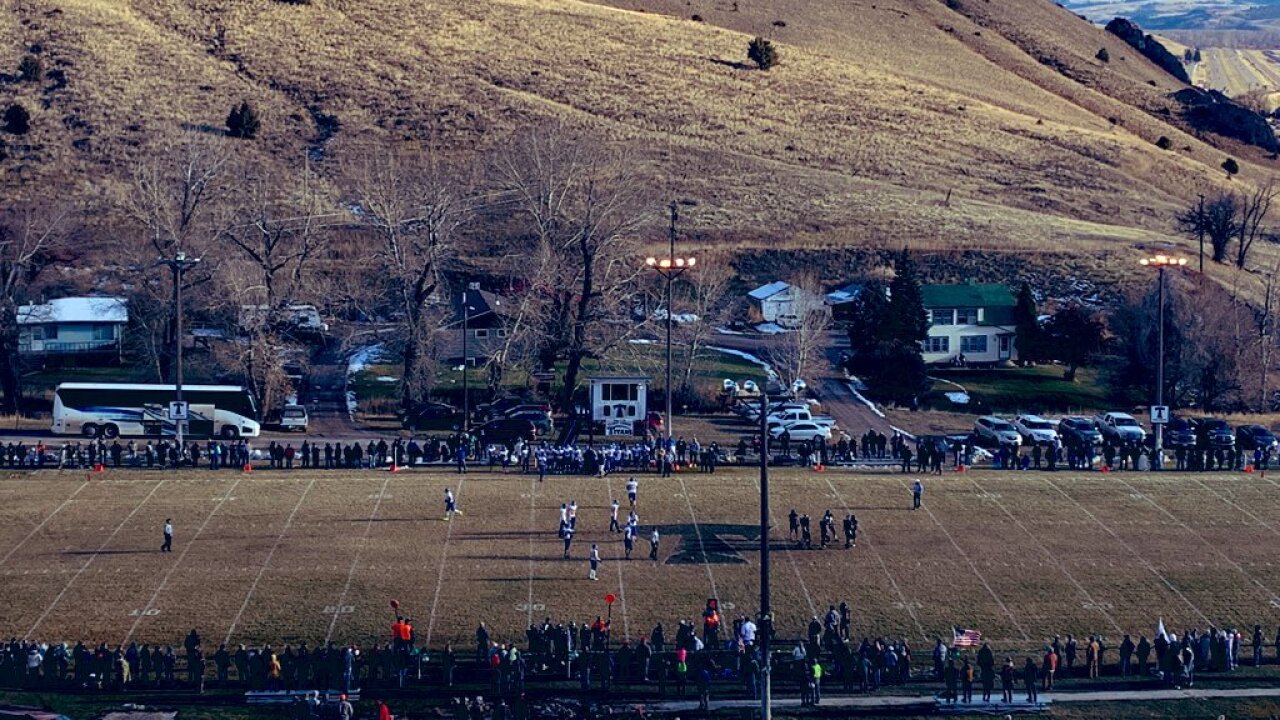 DRUMMOND -- Ride off into the sunset, Mike Cutler.

The head coach of the Drummond-Philipsburg football co-op coached his final game on Saturday afternoon as he heads into retirement, and the Titans made sure it was a memorable swan song for their coach.

"I can't explain that to you. You know what I mean? I wish everybody that watches the news tonight could experience what I'm experiencing right now," said Cutler. "Great group of kids, great group of parents. My son played his tail off. Great day, great communities. Couldn't be prouder of what happened here today."

Drummond-Philipsburg defeated Scobey 44-6 to win the program's third 8-Man football championship in the past four years.

Kade Cutler, the son of the outgoing mentor, scored three touchdowns -- two rushing and one on a kick return -- and intercepted two Scobey passes, while brothers Avery and Preston Metesh combined for three more touchdowns and two more interceptions, each from Avery Metesh.

"We worked our butts off in the weight rooms in the summer, in the winter," said Avery. "We just do it whenever we have to. We just work so much."

Drummond-Philipsburg's defense was inspired in Mike Cutler's final game, intercepting the four Scobey passes and holding the Spartans on fourth down three times, all in the second half.

Kade Cutler gave the Titans momentum early, intercepting a Jayce Tande pass on the first offensive play from scrimmage, but Drummond-Philipsburg's offense fell short on its first two possessions, the second ending on fourth-and-goal at the 1-yard line.

But the Titans' defense did its part, quickly giving the ball back to Cutler and the offense, where the quarterback scored on a 9-yard touchdown run with 46 seconds remaining in the first quarter, as the Titans led 6-0.

But Tande and the Spartans marched swiftly downfield on the first possession of the second quarter, with the Scobey QB first looking to pass to his right, then taking off around the end to his left for a big gain into the red zone. Tande hit Colter Oie for a 15-yard touchdown to tie the game at 6-all.

That's where the score held until the final 10 seconds of the half, when Avery Metesh intercepted Tande and returned it 47 yards for a score, then Preston Metesh added a two-point conversion for the 14-6 halftime lead.

Kade Cutler started the second half the same way he opened the game -- with a big play -- by returning the second-half kickoff nearly 70 yards for a touchdown that pushed the Titans' advantage to 20-6. Minutes later, Avery Metesh intercepted Tande for the second time, leading to a Cutler 3-yard touchdown run and two-point conversion that suddenly had Drummond-Philipsburg in control, 28-6.

The Titans scored the first 14 points of the second half in 1 minute, 59 seconds of clock time and the rout was on.

It took nearly 10 minutes, but the Titans extended their lead late in the third as Preston Metesh went 30 yards for a score, and Cutler tacked on the two-point conversion to make it 36-6 with 31.7 seconds remaining in the quarter.

"The beauty of this is these kids get to remember this day for the rest of their lives," said Cutler.

Cutler again began a quarter with a big play, snaring his second interception of the game, this turnover leading to a Preston Metesh 12-yard scoring run, and with the two-point conversion, Drummond-Philipsburg was suddenly in front 44-6.

"It's awesome. We just won a chipper. Our third one, I've got three rings," said Preston Metesh with an ear-to-ear grin.

Cutler became head coach of the Titans in 2017.