Vicki Carle to be honored with Extraordinary Ordinary Women of MSU

BILLINGS – She’s done so much for so many. That’s why Billings Skyview volleyball coach Vicki Carle continues to be praised for leaving her stamp on the landscape of women’s athletics in Montana.

Carle is among 125 who will be recognized Friday and Saturday as Extraordinary Ordinary Women of Montana State University. An interactive cyberwall display is set up in the atrium of MSU’s library that includes all honorees. Carle dominated the Bobcats’ basketball court as Vicki Heebner and is the first women’s basketball player inducted to MSU’s Athletic Hall of Fame. 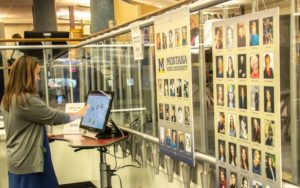 She’s always been too humble to fill in the local media on awards of this fashion. MTN Sports only learned via email from a longtime friend.

“(MSU President Waded) Cruzado is getting it, as well as (women’s basketball coach) Tricia Binford, and to have me be in with those folks, they’re top-notch people, so I’m very humbled and very excited about that,” Carle said before her team’s playoff match against Billing Senior on Thursday night.

All 125 women are invited to a luncheon on campus Friday afternoon. Carle’s father passed away less than two weeks ago, and as fate would have it, a childhood babysitter of Carle’s is also among the women being recognized.

“As you know, my dad passed away a week ago, about 10 days ago,” Carle said. “And there’s a gal from Three Forks, two of us Three Forkians, her name is Ann Bertagnolli. As a matter of fact, Ann used to babysit my sister and me back in the day, and so when I saw her name, I cried again over the whole thing. I’m hoping she’ll be able to come and I’ll be able to connect with her (Friday) at a luncheon. That would kind of special.”

All attendees will be escorted onto the field for a presentation and photo during the first half of Montana State’s home football game Saturday against Cal Poly.