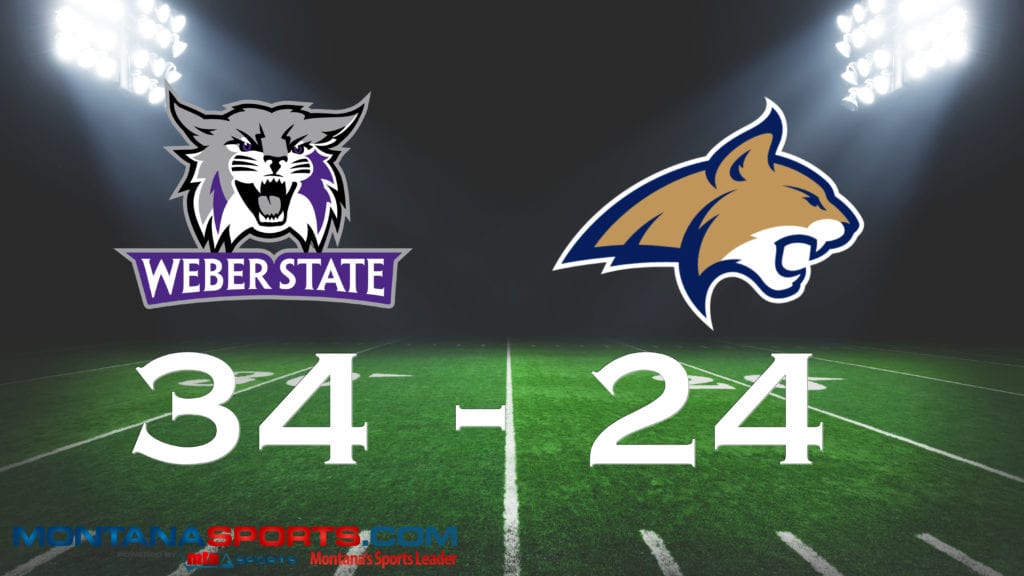 OGDEN, Utah — No. 7 Weber State overcame a 10-0 deficit to defeat the visiting Montana State Bobcats 34-24 Saturday. The Wildcats are now 5-2 overall and 3-1 in the Big Sky Conference. Montana State, meanwhile, is 4-3 overall and 2-2 in conference.

Travis Jonsen got the scoring started for MSU, running in a 7-yard touchdown in the first quarter. After an MSU field goal and a Weber State touchdown, Troy Andersen put the Cats up 17-7 with a 71-yard scoring scamper. Treshawn Garrett scored the first of his three touchdowns in the second quarter to pull WSU within 17-14 at halftime. The Wildcats would briefly tie the game at 17, but MSU’s Greg Filer III snagged an interception and returned it 27 yards for a touchdown to give the lead back to Montana State midway through the third quarter.

Weber State would control the rest of the game, though, as Garrett added two more rushing touchdowns to help the Wildcats salt away the 34-24 win.

TURNING POINT: Trailing 31-24 with 5:49 remaining, the Bobcats had decent starting field position at their own 30-yard line to try to put together a game-tying drive. But Andersen threw an interception to Weber State’s Keilan Benjamin on the series’ first play, and Benjamin returned it 19 yards to the MSU 14. WSU would tack on a field goal to build the final double-digit advantage.

STAT OF THE GAME: Facing the Big Sky Conference’s best defense, the Bobcats couldn’t establish a passing game, completing just nine of 23 passes for 53 yards and two interceptions. The Wildcats capitalized off both interceptions, scoring 10 points off the turnovers.

GAME BALLS: Treshawn Garrett, Greg Filer III. Garrett, a 5-foot-11 senior running back, finished the game with 85 rushing yards and three touchdowns on 21 attempts. He added four receptions for 34 yards. Three different Bobcats — Filer, Jahque Alleyne and Dante Sparaco — had interceptions, but Filer had the pick-6 that kept MSU in the game in the second half.

WHAT’S NEXT: Montana State stays on the road, traveling to Idaho State for another crucial Big Sky Conference game on Oct. 25. The Bengals (4-3 overall, 3-1 conference) are coming off a 48-41 loss to Liberty. Kickoff between MSU and ISU is set for 3:30 p.m. at Holt Arena in Pocatello, Idaho. Weber State is at North Dakota.