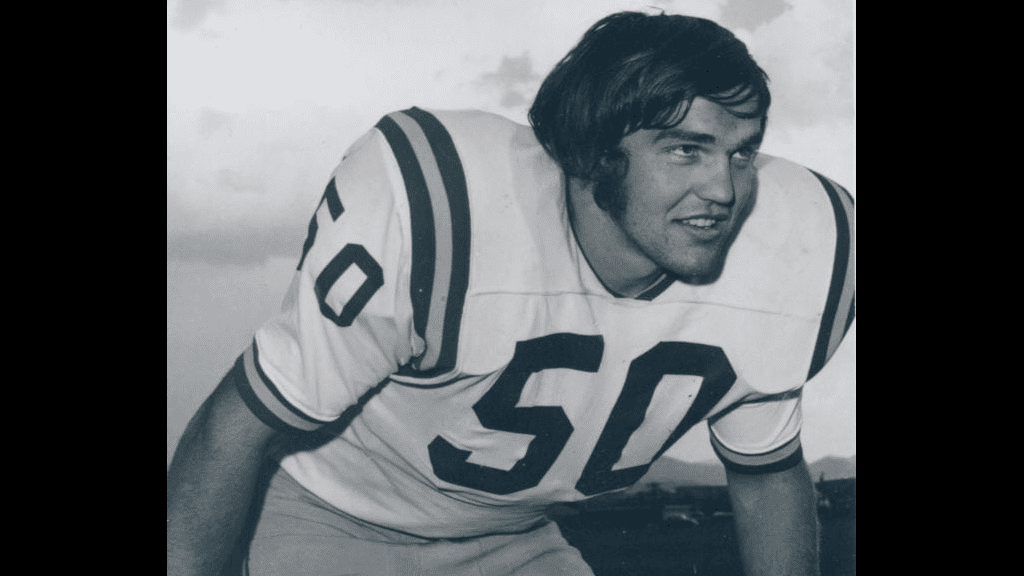 BOZEMAN – The late Ron Ueland of Butte, a Montana State University football legend and giant in Montana agriculture, has been named the university’s 2018 Outstanding Agricultural Leader.

“Ron was a champion of MSU and Montana agriculture for most of his very full, accomplished life,” said Charles Boyer, MSU vice president of agriculture. “This award is given in memory of Ron for his decades of agricultural dedication and innovation.”

Boyer said the award is an example for today’s agriculture students of a life dedicated to service.

The Outstanding Agricultural Leader award is given annually to individuals or couples who are engaged and well-respected in the state’s agricultural community. Recipients have impacted many with their accomplishments, have a lifetime of achievement in agriculture, are industry leaders or innovative producers, and are instrumental in Montana agriculture.

The public is invited to honor Ueland’s memory and contributions to Montana agriculture at a Montana-made breakfast at 10:30 a.m. Saturday, Nov. 10, in the ballrooms of MSU’s Strand Union Building. The breakfast is part of the college’s annual Celebrate Agriculture event scheduled for Nov. 9-10.

In 2000, the MSU College of Agriculture honored Ron’s father, Ole Ueland, with an Outstanding Agricultural Leader award as well.

“Our family is beyond honored to accept this award on behalf of our dad,” said Jennifer O’Brien. “He was deeply committed to the state of Montana and its bountiful agriculture. He believed the world had a lot to learn from the agricultural community in Montana – from researchers at MSU, to the sophisticated growers across the state, and to the growing number of value-added producers. To be honored by the community he adored, this is really special.”

Born into a cattle ranching family in Silver Bow County, Ueland earned a degree from MSU in business management in 1974. During his time at MSU, he excelled in football under coach Sonny Holland. He was a team captain, earned honorable mention All-American honors and was a first team Big Sky Conference linebacker in 1973.

Ueland was operations manager for Tri-River Chemical from 1975 to 1979 before joining ConAgra, where he served as general manager of its United Agri Products California Division for several years. He was executive vice president of ConAgra’s United Agri Product Companies from 1986 to 1997.

Upon returning to his native Butte, Ueland worked tirelessly throughout his career in myriad economic development projects for downtown Butte that included revitalizing the Metals Bank Building and several building renovation projects in uptown Butte.

In January 2017, along with other local investors, Ueland announced the building of a facility to produce a variety of malt for Montana’s growing craft brewing industry. They chose Butte’s business park for their Montana Craft Malt plant, which will use only Montana-grown barley to produce 10,000 tons of malt per year.

In 2015, Ueland was a public advocate for encouraging the Montana Legislature to allocate $15 million to university research to spur Montana’s economic development. He argued dedicating state funds for agriculture research would benefit the next generation of agriculture students at MSU.

Ueland held several leadership roles in many ventures, including serving as president of WestBred LLC, a national agricultural research and development company. He was partner and owner in International Truck Body Co., Ueland Ranches Inc., and Ueland Land Development; and president of Northern Seed Co., which has developed commercial seed varieties specifically for Montana, among other things.

During his tenure at Northern Seed Co., Ueland worked closely with MSU College of Agriculture and Montana Agricultural Experiment Station faculty in communicating seed variety characteristics and desires from the industry.

“Ron was smart, direct, open and had a good, honest feel for the producer as well as the agribusiness side of things,” Jacobsen said. “The breadth of his commercial experience allowed him to integrate many different facets of agricultural decision making. He knew corporate policies and practices all the way down to practical agronomic decisions of which varieties do best and where.”

Jacobsen added that Ueland possessed an impressive communication strategy, which was appreciated among the agricultural community.

“He was a master at describing situations and alternatives and then softly, in carefully selected words, ask questions that would lead you to certain conclusions or directions,” Jacobsen said.

Russ Miner, fertilizer director of the Midwest region for Wilbur Ellis, called Ueland a mentor who was “a good mix of a bulldog and a coach.”

“He was so passionate about MSU and the Bobcats and most anything that had to do with agriculture,” Miner said. “When he was committed to a project or an outcome, he was determined to see it through and he had this unique ability to bring in people with him.”

Miner said Ueland’s advocacy for agriculture research has helped Montana in numerous ways. According to Miner, Ueland was one of the early producers to advocate for a larger pool of funds through the Montana Fertilizer Advisory Committee, which provides funding for soil fertility, management, education and research across Montana.

“To Ron, agriculture research and industry went hand in hand,” he said. “He was always forward-thinking, whether it was advancing a seed variety, increasing yields or the production side of things. Ron was the guy with the vision.”

Ueland is survived by his high school sweetheart and wife, Sue, his son Ty, daughters Jennifer and Sunni and seven grandchildren.