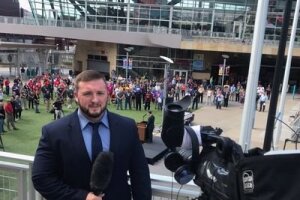 John Miller joined KBZK as a sports reporter in February 2020. He was born and raised in Cottage Grove, Minnesota.

After graduating from high school in 2010, John joined the United States Marine Corps as an intelligence specialist. In 2012, he deployed to the Middle East serving in Operation Enduring Freedom.

After leaving the Marine Corps in 2015, John spent the next few years at the University of Minnesota in the Hubbard School of Journalism. During that time, he covered the Minnesota Gophers football program for the Minnesota Daily, and also interned at local stations WCCO-TV and KARE-11 in the sports department. He graduated in the fall of 2019.

When he's not at KBZK, John likes to be at home with his dogs, watching sports and finding the latest television show to binge. However, he spends most of his time at the gym. He’s a huge fan of the Green Bay Packers, Minnesota Twins, Minnesota Timberwolves and anything related to the Minnesota Golden Gophers. If you see him out in town, feel free to talk sports with him.

John can be reached via email: john.miller@kbzk.com.